How Body Horror Of The 2020s Explores The Modern Trans Experience 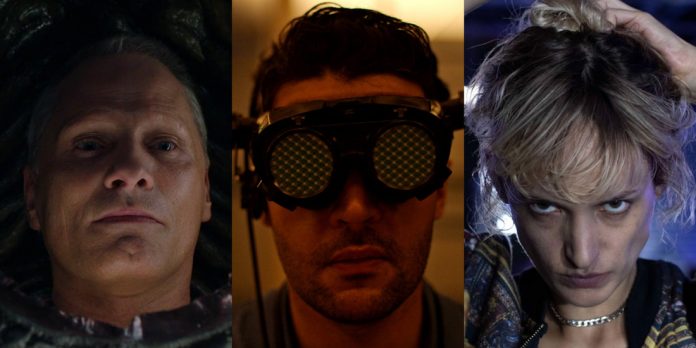 ​For most of my life, I was never able to understand why I was so taken with “body horror.” By definition, it’s a “subgenre of horror that intentionally showcases grotesque or psychologically disturbing violations of the human body” – so, in other words, it’s some pretty sick shit. And yet, I couldn’t pull my eyes away from films like David Cronenberg’s “The Fly” or John Carpenter’s “The Thing,” where characters could literally become entirely new beings by “shedding the skin of their former selves” in terrifying yet thrilling transformations.

​And yet, as the years went on, the explanation for my early body horror fascination became clearer since I found myself in a body horror film of my own as a young woman desperately yearning for her physical form to match how she felt inside. Why couldn’t I simply shed my skin and be reborn anew, complete with the body I’d always desired, so I could finally find a place where I “fit” and stop feeling like I was an outcast or an abnormality? Why did transition in “the real world” have to be so tough?

However, even though body horror mainly was a relic of the 80s and 90s by the time I officially started coming to terms with my identity as a trans woman and beginning my medical transition, the genre started to experience a resurgence right at the time I needed it most with the release of Brandon Cronenberg’s “Possessor” in 2020, Julia Ducournau’s “Titane” in 2021, and David Cronenberg’s “Crimes of the Future,” in 2022 – three films that represented vastly different parts of a trans person’s transition journey, but movies that all still reached me at the perfect moments, in perfect succession.

In “Possessor,” we follow assassin Tasya Vos (Andrea Riseborough), who works for an organization that uses brain-implant technology to inhabit other people’s bodies, ultimately driving them to kill targets on the organization’s behalf so that they – and Vos – remain free of blame. However, things take a terrible turn when they’re asked to take out a wealthy CEO and his daughter, with Vos possessing the daughter’s boyfriend, a man named Colin Tate (Christopher Abbott), only for Colin to become aware of Tasya’s presence. In an act of rebellion, Colin stabs himself in the skull, damaging the implant in his brain and preventing Tasya from leaving his body or overpowering his will, leaving them both struggling for control.

At this same time in my life, I also felt a tug-of-war for power between the body I inhabited daily and my internal desires to act and look incongruous with this current form. I was completing college, stuck during the pandemic in a home with a family who was initially disproving of my transition, and thus unable to make an active effort to fulfill the wishes relating to “correcting” my biology, leaving me infuriated and driving me insane. I didn’t just feel like a prisoner in that home but in my own body. And, in that sense, I related to both Tasya and Colin – a woman trapped in a body where she didn’t belong and a fearful boy fighting against change at all costs to preserve peace.

The following fall, I had left the nightmare that was Nebraska, and I found myself where I’d always wanted to be: in Los Angeles, living with my closest friends, who accepted and validated me for whoever and whatever I was. That same season, I saw “Titane,” a film which frankly defies description but, to make things simple as possible, centers around the crimes of a serial killer named Alexia (Agathe Rousselle), who is forced to go on the run after she’s wanted for a murder gone wrong, in which one woman escapes. To hide, Alexia alters her appearance and pretends to be “Adrien Legrand,” a young boy who had disappeared ten years prior. She cuts her hair, tapes down her breasts (and her protruding belly since she was impregnated by a car – it’s a long story), and breaks her nose. Eventually, she’s taken in by Adrien’s father, Vincent (Vincent Lindon), who accepts Alexia as his missing son.

Some have argued that “Titane” doesn’t actually qualify as a trans text – and Julia Ducournau herself has even pushed back against this reading (stating that Alexia’s physical transformation is more due to her desiring safety than to her being trans) – but, as a trans woman just beginning hormone replacement therapy around the same time I was watching (and rewatching) this film, I couldn’t help but see myself – and my transition – in the messiness of this entire endeavor. In short, transition is nowhere near as magical as the media makes it out to be. Spiritually, it’s a revelatory experience – like any process that helps you better become yourself should be – but physically, it’s not always all that pretty, and “Titane” was one of the first films that made me feel that that was… okay.

On the outside, Alexia starts to look more and more like a boy, paralleling the physical changes one experiences as the start of a medical transition that others may take note of, but, at this same time, you’re still struggling with possessing other characteristics you’d wish to shed (and that you wish would “transform” quicker on HRT), forcing you to experience that lingering gender dysphoria still even as you’re taking the steps to find the fullest you (and I saw this most in Alexia’s pregnancy, where she found herself unable to escape this remaining aspect of her female form in her transformation to Adrien). However, it’s one of Vincent’s lines – “I don’t care who you are. You’ll always be my son. Whoever you are.” – that has stuck with me most, demonstrating the supreme power support has at this stage in one’s transition. When you feel your ugliest and most “inhuman,” unsure of what your future self will be, that support from friends or family is simply life-changing, reassuring you that even if you don’t see yourself the “right way” yet, they do.

And now, as I’d moved past the worst of my initial dysphoria on HRT, I found myself more satisfied with my physicality as a trans woman than I’d ever been before, but others still had something to say, especially Republican politicians with unjustified rage towards the queer and trans communities. Every day, it felt like I was reading a brand new headline about legislation seeking to limit trans expression, with Texas calling for the investigation of the parents of trans children who allow them access to hormone therapy, Alabama seeking to charge doctors with felonies for “providing trans youth with gender-affirming health care” such as puberty blockers, and Ohio requiring trans girls to “submit to invasive gender-verification tests if they want to stay on their high school and college sports teams.” Everywhere around me, it’s as if governments across the country are trying to legislate trans people out of existence.

When I sat down to watch David Cronenberg’s “Crimes of the Future” just a few weeks ago, I was shocked by how much of our current predicament I saw in this post-apocalyptic parable. Taking place in a “not-so-distant future” where mankind is straining to adapt to its “synthetic surroundings” – with some starting to develop the ability to produce new organs – the film follows performance artist Saul Tenser (Viggo Mortensen) first and foremost, who has these organs removed in avant-garde performances by his partner Caprice (Léa Seydoux). However, a new governmental group called the National Organ Registry starts to interfere with their art and track their movements, demanding that Saul keep a record of the new organs he grows for their research, oddly inserting themselves in manners that don’t involve them and seemingly seeking to limit the expanse of his evolution.

One can also draw parallels to America’s present fight for abortion rights. Still, from my perspective, I fully associated the National Organ Registry with today’s Republicans – and all their cronies – who seek to put limitations on the biological transition of trans people, frequently without even knowing the physical and emotional particulars of what they’re legislating (I swear to God, I meet more people who have opinions on trans people than those who actually know trans people). And it was so deeply infuriating to realize that, despite having fought – and won – battles with my own personal insecurities surrounding my transition, there were always more wars to be waged with those outside who would never let me live a single day without weighing in on my experience with no knowledge of what transitioning entailed.

There are those who will only ever see body horror as a subgenre associated with gratuitous gore and insidious imagery, and that’s understandable to an extent, but, in some odd way, it’s always felt like home to me, depicting ugly and unsettling events and emotions I’ve been reticent to express myself and making me feel less lonely and loathsome as a result. Additionally, while transitioning can be a brutal journey – physically and mentally – in the midst of all that mess, there’s beauty to be found if you know where to look, and body horror has shown me how to find the hope beneath all the horror of my personal and political existence, and for that, I can’t thank them enough. In the words of David Cronenberg, “long live the new flesh.”