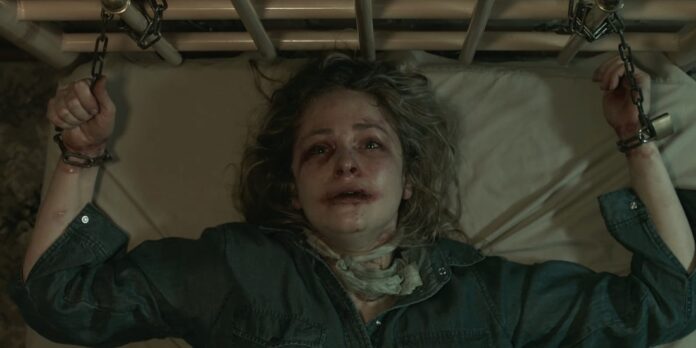 THE STORY – In 1987, murderous couple John and Evelyn roam the streets of Perth, Australia, searching for their latest victim. Fate leads them to Vicki Maloney, a teen who snuck out of her house at night to go to a party. Now held captive in a room, Vicki must use her wits to try and drive a wedge between the crazed duo before they can finish her off.

​What writer/director Ben Young has created with “Hounds Of Love” is no doubt one of the most disturbing films you will see this year. Much like “Blue Velvet,” his film showcases the dark underbelly of typical modern suburbia and the twisted individuals who live in it, amongst us. Some scenes in “Hounds Of Love” will no doubt cause an uproar amongst some moviegoers and will surely shock nearly everyone who lays their eyes upon it. It also may be dismissed for its simplistic story of a young girl who is kidnapped and subjected to mental and physical torture by her captors. However, Ben Young collects committed performances from his cast and displays a sure hand at directing this endurance test of a film, leading to satisfying results.

Not to be confused with the 1985 album of the same name by Kate Bush, “Hounds Of Love” is something much more sinister and anxiety inducing than that pop album. Taking place in Perth Australia in December of 1987, a young girl named Vicki (Ashleigh Cummings) is abducted by a serial killer couple named John (Stephen Curry) and Evelyn (Emma Booth). Not the first girl to be kidnapped and murdered by the sadistic duo, John and Evelyn have been doing this for an undisclosed amount of time and have everything planned out in an effort to fulfill their sadistic urges. Vicki senses that there is clear tension within the complex relationship between John and Evelyn. Evelyn and John have no kids and it’s clear that Evelyn is jealous of John’s infatuation towards Vicki. Realizing this, she does her best to survive as long as she can so that she can drive a wedge between them and make her escape to her worried mother (Susie Porter).

Seeing as how this is Ben Young’s debut feature, I must first commend the director/writer for showing incredible restraint with the material. Although still terrifying and extremely visceral in its depiction of sadism, Young withholds from showing us the more graphic details of his story and instead focuses on the outside of the door once it is closed and the screams that just barely make their way through said door. He allows for our imaginations to run wild, which makes “Hounds Of Love” more horrifying than any action he could ever depict on screen. It’s also disturbing in how he showcases the emotional turmoil of his characters and keeps his film grounded within reality. No decision, action or reaction feels forced or unrealistic. This is a film that I’m positive, as of this writing, is occurring right now at this very moment somewhere in the world and that very idea is all that is needed to make “Hounds Of Love” stand out.

Dark, atmospheric and simmering with tension, many have touted “Hounds Of Love” as the most disturbing film of 2017 and it’s hard to argue with them. Ben Young’s confident direction uses slow motion to effective use in order to show us all of the details that are going on within the dangerous situation Vicki finds herself in. His powers of observation hold a magnifying glass up to society to remind us how sick and twisted some individuals can be in this world. The devil is truly in the details and Ben Young slows the pace down to excruciating effect, allowing the pulsing score to further drive our deepest and darkest fears. It makes “Hounds Of Love” a personal film of dread and horror that any person can envision themselves in. Every moment feels earned, every scream feels warranted. “Hounds Of Love” may be a simple story but Ben Young and his dedicated cast make it something special.