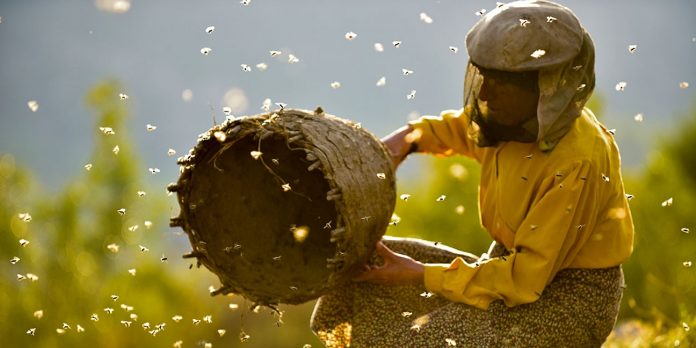 ​The new documentary “Honeyland” is a feat of narrative structure being captured in a non-narrative motion picture. For that reason alone it is worth seeing. But perhaps the true miracle of the movie is its ability to provide lessons that truly any audience member can learn from, an impressively universal achievement for such a specific story. That might seem unlikely coming from a documentary about a Macedonian beekeeper (who, according to the film, is the last female beekeeper in Europe), but once you see it, it’s impossible to not take away something of value. The film picked up three awards at this year’s Sundance Film Festival and is currently in a very limited release, but I would encourage anyone reading this to seek this extraordinary film out whenever it becomes available for home viewing. In honor of the film, I thought it would be enlightening to do a profile exploring some of the topics and lessons the film subtly imparts. So take a seat students, and let’s take a visit to Honeyland! Minor spoilers are ahead, but even knowing the plot beats of the film it is worth seeing for the joy of its structure and narrative pay-offs.

The most important lesson I took from the film was “respect your neighbors”. The documentary’s main subject, the aforementioned female beekeeper named Hatidze, is first shown going about her honey-collecting practices in a methodical, structured way. She clearly has been doing this for the majority of her 50 years on Earth. Fairly quickly in the through-line of the film, a family of two parents and approximately five to seven children (it’s truly hard to keep track of them, considering the chaotic, scattered way they are shown in their daily lives) moves in next door to Hatidze. This family proves to be a major disruption to Hatidze’s quiet life. The parents seem to have no interest in keeping their children from being a source of noisy distraction to their neighbors, either because they are too preoccupied with their own stressful lives or because their methods of communication and discipline are equally loud and disruptive. The filmmaking is not subtle in depicting the major shift this family’s arrival brings to Hatidze’s life. Before they move in, her life follows a methodical but successful routine with few distractions, and the family brings all sorts of new tasks to her life, such as chasing off their stray animals or separating the children in arguments.

The new family are nomadic farmers, specializing in cattle, but when the father sees the success Hatidze has achieved with her honey collecting, he quickly purchases a collection of bees and hives in an attempt to mimic this success. It’s no surprise when they prove to be fairly unsuccessful at beekeeping. Something they are shown not focusing on is the importance of communication in all aspects of daily life, another one of the lessons the film gives us. The father refuses to listen to his children when they complain of the frequent bee stings they receive (a problem that Hatidze does not have to deal with), he doesn’t appropriately tell his children how to care for the bees and the cattle, and most of all, he doesn’t listen to Hatidze’s beekeeping advice. One of the more important and thematically relevant techniques of her beekeeping is her strategy of leaving half of the honeycomb that she is harvesting in the bee’s nest, that way they don’t seek out honey from other colonies. This small-scale depiction of sharing and balance is mirrored in the imbalanced relationship between the family and Hatidze, also tying into the notion of “respect your neighbors”. When the family’s patriarch does not listen to this piece of advice, his bees attack Hatidze’s bees, disrupting the balance of their neighboring arrangement.

These lessons seem even more prescient in our current world, where peoples’ lack of interest in looking outside of one’s own existence and situation often results in miscommunication and conflict. The relationship between the family and Hatidze can be used to reflect, in miniature, any nature of real-world 2019 conflicts. For this reason, along with the film’s achievement on its own, I hope it can maintain buzz (no pun intended) through Oscar season.

If nothing else, the film is about the importance of respecting the Earth, another extremely urgent notion that does not seem to be a priority for those currently in power. At one point in the film, a character uses a chainsaw, and its loud, mechanical nature is fairly shocking in its disruption to this otherwise old-fashioned world. It’s not hard to see the chainsaw as a symbol of any industrial power that is more interested in convenience and efficiency than respecting the planet and its natural ways.

Again, I urge anyone reading this to seek out “Honeyland” if it’s playing near you, and if not, it is absolutely worth watching at home. It is a short, simple, but deceptively deep film with lessons that we all could stand to learn.