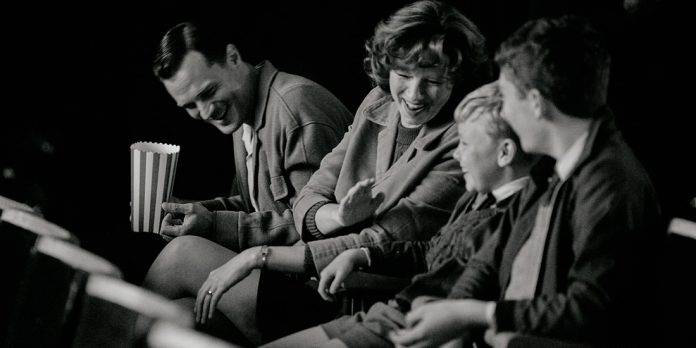 By Eve O’Dea
​
Kenneth Branagh’s “Belfast” has, seemingly from the moment it premiered at the Telluride Film Festival in September, been adorned with the epithet of “crowd-pleaser.” While that might be an inherently positive description, the moniker leaves a nasty taste in the mouths of some film-snobs (sometimes even my own), especially when said crowd-pleaser dares to creep towards a potential Best Picture win. Take, for example, Sam Mendes’ “1917,” a feat of cinematic excellence that masterfully illustrated a touching, inspiring story of resilience which performed well at the box-office and was a critical hit, had its reputation marred by the chance of it winning Best Picture over Bong-Joon ho’s groundbreaking “Parasite.” Its reputation, however, quickly bounced back once it lost the Best Picture prize to the history-making South Korean film, but imagine if it had won, though? How would history view its win? Right now, there is a film that is deemed as “the chosen one” for this year’s Best Picture prize by critics, and anything else that might come close to snatching the award away from it will face a high level of backlash and scrutiny (as we’re seeing with the late surge for “CODA” amongst its recent industry wins). Especially if it’s seen as a “crowd-pleaser,” which “Belfast” unashamedly is.

Soon after “Belfast’s” premiere, the film went on to win the coveted Toronto International Film Festival People’s Choice Award. This accolade serves as an early indicator of a film’s future Oscar-winning potential. Still, it has historically gone to similarly divisive (on #FilmTwitter) but relatively popular films such as “The King’s Speech,” “La La Land,” “The Imitation Game,” “Three Billboards Outside of Ebbing, Missouri,” “Green Book,” and “Jojo Rabbit.” Of the ones I mentioned, only two of them, “Green Book” (2018) and “The King’s Speech” (2010), ultimately won Best Picture. Perhaps due to a prevailing attitude of cynicism that heavily influences our artistic landscape and that art’s reception, we look at crowd-pleasers, or films that lean more sweet than bitter, as hollow fantasies, unworthy of consideration or respect. These naysayers and harsh critics of “Belfast” obviously underestimate how difficult it is to please a crowd and how well Kenneth Branagh’s film pulls this off.

A story based on Branagh’s own childhood, “Belfast” takes place from the perspective of Buddy (a cute Jude Hill), a young boy from a working-class Protestant family growing up in the North Ireland capital in the late 1960s. Surrounded by the escalating turmoil of the Troubles, Buddy’s parents (the Oscar overlooked Caitriona Balfe and Jamie Dornan) must choose whether or not to leave their home for their family’s safety. At the film’s heart, young actor Jude Hill gives a skillful performance beyond his years as Buddy, anchoring the film and giving the audience the child’s perspective through which to view Branagh’s story. Supported by a troupe of acting veterans, including the Oscar-nominated Ciarán Hinds and Judi Dench, the film’s cast offers wonderful performances across the board. Akin to the film’s overall tone, these performances manage to see and relish in the fact that there is still good to be found in the world while being simultaneously wary of its many dangers.

Of course, it is not enough for a film to merely be a crowd-pleaser to win an Oscar for Best Picture, and I can definitively say that “Belfast” is so much more than that. In addition to the aforementioned brilliant cast, the film displays breathtaking cinematography, impressive sound work, evocative production design, and a clever script thanks to its experienced writer-director Kenneth Branagh, drawing upon his own personal life story for inspiration. In that regard, it’s fair to say that if you have any connection to him as a filmmaker, actor, or person, the film is a reflection of that attachment. Rewarding the film with a Best Picture win would be akin to awarding this deserved team for its wide range of skill and expertise. As a film director, Branagh has explored a wide range of genres and subject matter since he made his directorial debut with “Henry V” in 1989. He will likely always be known first as one of the greatest film directors of Shakespearean adaptation, perhaps surpassing his predecessor Laurence Olivier. A man of the theatre, “Belfast” presents a since unseen side of his style and abilities while he unabashedly proclaims his love of cinema through Buddy’s wide, curious eyes. Drawing inspiration from Hollywood Westerns such as “High Noon,” “The Man Who Shot Liberty Valance” and wartime family dramas like “Mrs. Miniver,” and “The Best Years of Our Lives,” “Belfast” brings together the old and the new, finding a space for a centuries-old conflict to exist as a parable for our current social division and struggle of the modern refugee.

“Belfast” is a story both intimately personal and universally accessible, told through expert craftsmanship coupled with overt passion and dedication to the art-form. Considering that the Academy is so desperate to increase its viewership and general public interest, I believe it would be in their best interest to select a film beloved by so many as the best film of 2021. If not, the least they could do is find some way to honor Branagh in either Best Director or Original Screenplay, which would stand as a consolation prize for the entire film since it is so clearly tied to him. It would fit comfortably among its ninety-three previous winners as a timely yet timeless tale that reminds us how much there is to love about film and the places we call home.

What are your thoughts on “Belfast?” Are you predicting it to win an Oscar on March 27th? If so, in which category? Please check out the NBP team’s latest Oscar predictions here and let us know your thoughts in the comments section below or on our Twitter account.