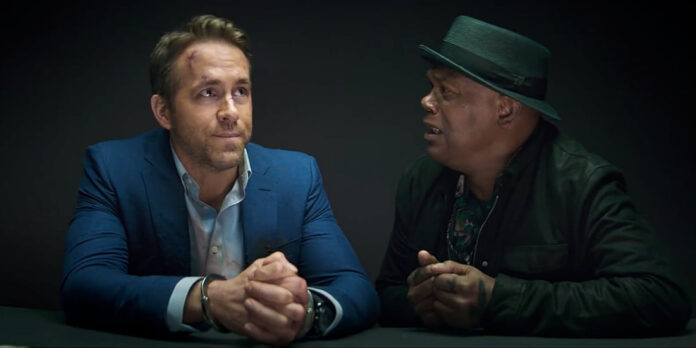 THE STORY – The world’s most lethal odd couple — bodyguard Michael Bryce and hit man Darius Kincaid — are back for another life-threatening mission. Still unlicensed and under scrutiny, Bryce is forced into action by Darius’s even more volatile wife. Soon, all three are in over their heads when a madman’s sinister plot threatens to leave Europe in total chaos.

“The fate of the world is in the hands of a Hitman and his bodyguard.”

After the surprising box office success of “The Hitman’s Bodyguard” in 2017, the team has reassembled for the new sequel, “Hitman’s Wife’s Bodyguard” (cut to Justin Timberlake in “The Social Network” saying “Drop the ‘The'”). Ryan Reynolds and Samuel L. Jackson return as the titular Bodyguard and Hitman, respectively, along with Salma Hayek taking a much more prominent role this time around. While the action-comedy sequel leans even more heavily on the absurdist humor between the three leads, it suffers from the same poor action direction and bland plotting that dragged the first film down.

Haunted by nightmares featuring Darius Kincaid (Jackson), Michael Bryce (Reynolds) decides to take a sabbatical from bodyguarding. No guns, no bombs, no killing, just a nice book on the beach in Italy. Naturally, this beach vacation is quickly interrupted by Darius’s wife, Sonia (Hayek). The mafia has kidnaped her husband, and she needs Bryce’s help to rescue him. The plot this time around is a bit more personal to the characters, but they soon get wrapped up in an international conspiracy that threatens the entire state of the world.

The highlight of “Hitman’s Wife’s Bodyguard” is, easily, the three leads. Reynolds is a reliably entertaining leading man, as long as you’re not tired of his schtick at this point. It’s the same as it ever was, but he’s consistently made to be the butt of the jokes throughout the film, which is actually a nice change of pace for Reynolds considering his movie star persona. The Kincaids mock him relentlessly and let him take most of the hits, literally. Jackson and Hayek are a perfect pair, playing so well off of each other. Sonia is so off-the-wall that Bryce remarks to her, “Your mouth needs an exorcism.” The three of them are truly ridiculous, perhaps even more so than in the first film, that it helps to elevate the film’s weak plot.

Playing out like a cheap James Bond knock-off led by the Three Stooges, the screenplay is the definition of generic. Apparently, some corrupt politician wants to use some device to do something bad to the world. We’ve seen this before. It’s so bland and boring that not even Academy Award-nominee Antonio Banderas (“Pain And Glory“) playing the villain can make it exciting. And look, I get it, the filmmakers are not really expecting us to watch “Hitman’s Wife’s Bodyguard” for the plot, but the jokes between the three leads aren’t enough to carry the film on their own.

A dull plot buoyed by funny leads might be enough if the action was any good, but it’s just not. Every stunt and action sequence is shot in the mildest possible way. It’s coherent enough for the audience to comprehend what’s happening but never comes close to something as impressive as the spy-action films it’s influenced by. If I’m being generous, everything about the visuals of the film is average at best. This movie could have been made ten or fifteen years ago, and it would’ve looked the same, from the stunts to the cinematography to the visual effects. Even the typefaces for the location IDs are boring. Would it have killed for this film to have a little bit more style?

Don’t get me wrong, “Hitman’s Wife’s Bodyguard” isn’t terrible; it just coasts by on the backs of the three leads and nothing else. It is hilarious at times. I indeed laughed out loud more than a few times throughout. But still, I spent far too much of the movie irked by the story and the action, which, for a film such as this, needs to be delivered at the very minimum to be reasonably successful. Plenty of action comedies have done both of those things well, but this one just doesn’t. It settles right in the middle of the road. I do have one prediction, though…Should there be a third film, it will most likely be called “Hitman’s Wife’s Baby’s Bodyguard.” It feels inevitable at this point.