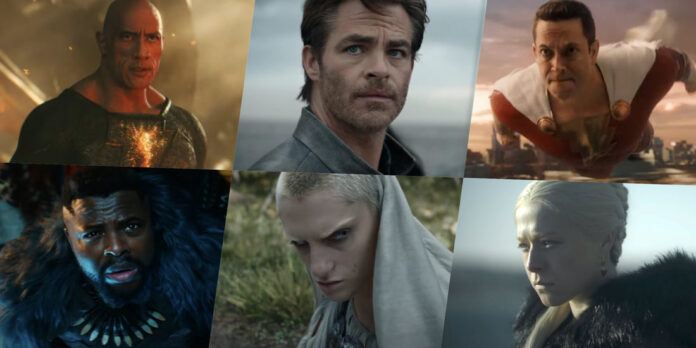 ​The San Diego Comic-Con (SDCC) has become the juggernaut for all things genre. It is a place where artists and fans can congregate together and celebrate all vacuums of science-fiction, fantasy, action-adventure, superheroes, and more. It is also the location where several studios provide updates on their future installments. From Amazon to Marvel Studios, this year’s SDCC was eventful in more ways than one, as it offered an insight into the future of genre-related content.

​Let’s break down the most eventful news. ​

“Dungeons And Dragons” Finally Gets Its Moment

Day One of Comic-Con consisted of the debut trailer for “Dungeons and Dragons: Honor Among Thieves,” which premiered after a panel that consisted of directors and co-writers Jonathan Goldstein and John Francis Daley and members of the cast. After the success of entities like “Stranger Things,” the intense fantasy roleplaying game has reached a new level of popularity in the cultural zeitgeist. Therefore it was only a matter of time until the actual game and mythology got its own brand new adaption. The film will be released in theaters on March 3rd, 2023, and stars Chris Pine, Michelle Rodriguez, Sophia Lillis, Regé-Jean Page, and Hugh Grant.​

​”John Wick” Is Thinking He’s Back!

SDCC is known for surprises. Surprise trailers, surprise news, and of course, surprise guests. But no one could have been prepared for The One himself, Keanu Reeves, who walked on stage at Comic-Con, joining “John Wick” director Chad Stahelski. During the panel, Reeves debuted the first poster and teaser trailer for the anticipated fourth John Wick film. The film reunites Reeves with Laurence Fishburne and Ian McShane but also features new faces to the world like Bill Skarsgård and Donnie Yen. From the trailer, it seems that the fourth installment will take place in Japan, Berlin, Jordan, France, and America. The film, still not officially titled, will be released on March 24th, 2023.

Even though Warner Brothers and DC gave no update on “The Flash,” “Aquaman 2,” “Batgirl,” or “Zatanna,” they still had an eventful Comic-Con. They decided to focus on two projects instead of their entire slate. One of the projects was “Shazam! Fury of the Gods,” which will be released on December 21st. A trailer was accompanied by the cast, which included Zachary Levi, Asher Angel, Jack Dylan Grazer, Lucy Liu, and director David Sandberg during the visit to Hall H. The other project Warner Brothers and DC promoted was “Black Adam,” which will come to theaters on October 21st. Star Dwayne Johnson came onto stage fully in costume as he presented an exclusive look and promised that the universe would never be the same again.

Of course, Comic-Con isn’t just about movies and comics. Genre-based TV adaptations have also claimed SDCC/Hall H as their home. Gearing up for their September 2nd premiere, the cast and creative team of “The Lord of the Rings: The Ring of Power” stopped by Hall H and gave an insight on what to expect. Another trailer was also released, showcasing the grand scale that only the world of Middle Earth can achieve.

However, the only fantasy entity to give “The Lord of the Rings” a run for its money was HBO’s “Game of Thrones,” which will also be releasing a spin-off show titled “House of Dragon” on August 21st. Cast and crew, including writer George R.R. Martin, released a final trailer and teased what to expect from this story. “House of Dragon” will follow the Targaryen House that took place before “Game of Thrones” and stars Paddy Considine, Matt Smith, Emma D’Arcy, Olivia Cooke, Steve Toussaint, Rhys Ifans, and Graham McTavish.

Of course, everyone had their eyes on Saturday night when Kevin Feige and Marvel Studios entered Hall H. Much like the previous Marvel Studio events at Hall H, Feige showcased the entire fifth phase of the Marvel Cinematic Universe (MCU) but also gave an insight into Phase 6 which will have back-to-back Avengers moves, “Avengers: The Kang Dynasty” and “Avengers: Secret Wars,” declaring Phase 4, 5, and 6, the Multiverse Saga. Feige released the final trailer for “She-Hulk,” which will premiere on Disney+ on August 17th, as well as looks into entities like “Secret Invasion” and “Guardians of The Galaxy: Volume 3,” while announcing a fourth Captain America movie, “Captain America: New World Order” and a new season of Daredevil, which initially aired on Netflix, this updated version being titled “Daredevil: Born Again.”

However, the major news from Marvel’s Hall H was the teaser trailer for “Black Panther: Wakanda Forever,” the sequel to 2018’s Best Picture nominated and 3-time Oscar-winning film, “Black Panther.” The highly anticipated sequel reunites director Ryan Coogler and cast members Lupita Nyong’o, Angela Bassett, Letitia Wright, Danai Gurira, and Winston Duke. But it also adds new faces like Michaela Coel as Aneka, Tenoch Huerta as Namor, and Dominique Thorne as Riri Williams (who will get her own show, “Iron Heart,” following the film). The movie, which also serves as a tribute to the late Chadwick Boseman, was full of life and color and could possibly be one of the strongest MCU films to date. “Black Panther: Wakanda Forever” will be released in theaters on November 11th later this year.
​
What was your favorite moment from SDCC 2022? Which films and television shows are you most looking forward to seeing? Please let us know your thoughts in the comments section below or on our Twitter account.