“HELLO, GOODBYE, AND EVERYTHING IN BETWEEN” 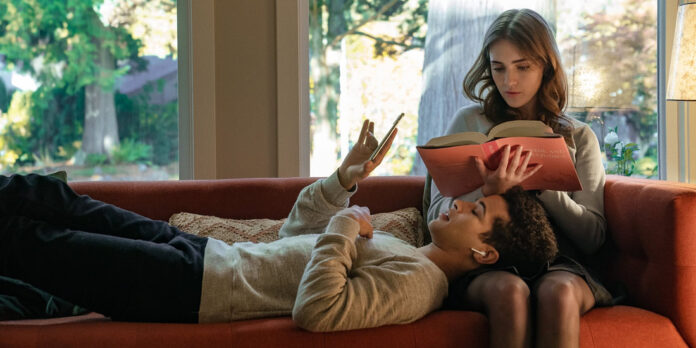 THE STORY – Claire and Aidan make a pact to break up before college with no regrets and no broken hearts. However, one epic goodbye date may offer them a last chance at love.
​
THE CAST – Talia Ryder, Jordan Fisher, Ayo Edebiri, Nico Hiraga & Jennifer Robertson
​
THE TEAM – Michael Lewen (Director), Ben York Jones & Amy Reed (Writers)​
​
THE RUNNING TIME – 82 Minutes

​​​​With many new high school romance films, Netflix continues to try to recapture the magic of the first “To All the Boys I’ve Loved Before” movie but has yet to produce one that lives up to it. The producers of the wildly popular film are back with “Hello, Goodbye, and Everything in Between,” which even has Jordan Fisher, who appeared in the second film in the TATBILB series, as a member of the cast. However, despite the good ingredients, the film never really comes together to deliver anything satisfactory.

Amy Reed and Ben York Jones adapted Jennifer E. Smith’s best-selling novel, about a couple going on their last date before breaking up to attend different colleges. The film opens with their first meeting at a house party at the beginning of their senior year. Claire (Talia Ryder) doesn’t want to have a relationship that she knows has an expiration date, but Aidan (Fisher, who also is an executive producer) convinces her that it will be worth it. The film then flashes forward to the end of their senior year, as Aidan has planned an elaborate last date for them in an effort to convince Claire not to break up with him before going to college. He recreates many of their firsts, bouncing from a concert to a hockey rink to tubing on a lake. Eventually, they run into their best friends, Sarah (Ayo Edebiri) and Scotty (Nico Hiraga), who are brought along on their journey.

Despite these events, the story doesn’t lead to a satisfying resolution. As it progresses, it becomes increasingly clear that Aidan is controlling and unable to accept that Claire knows what she wants. While Ryder and Fisher have good chemistry, it’s not enough to overcome the issues with their characters. And the premise also raises two big questions: how on earth did they fit all of this in a single day, and how did a high school student pay for it? This lack of realism is particularly irritating because a couple’s last date before going to college is a more realistic idea upon which many rom-coms are based.

But the real issue at the film’s heart is that its characters are underdeveloped and, worse, unlikable. We first see Aidan dressed as Ferris Bueller at a party, doing an elaborate karaoke performance of “Twist and Shout.” He’s in a band but will be pre-med in college to fulfill his parents’ wishes for his career. Unfortunately, how he treats his plans teeters on bothersome, as does his treatment of Claire and her wishes to not be in a relationship. Even Fisher’s charm and good vocals can’t save Aidan from being an aggravating character. Meanwhile, Claire lacks a personality other than being afraid of relationships because of her parents’ divorce. Her whole character is based on not wanting to be like her parents, but the audience is never given enough material about her even to care.

While the film’s diverse casting is to be admired, it also sidelines its most interesting characters, including the Black lesbian best friend, Sarah. She is perhaps the most intriguing character of all four – with her crush on a girl she was in a production of “Spring Awakening” with – but doesn’t get much screentime of her own, resulting in her role feeling like tokenism rather than anything meaningful. Meanwhile, the only real thing we know about Scotty is that he regrets never getting the chance to tag the senior wall. None of the characters empathize with Claire’s well-rooted belief that trying to make a high school relationship work in college is doomed to fail.

On top of these failed characters, Michael Lewen’s direction leaves much to be desired. He occasionally attempts a few kooky tricks – having Claire talk to two past versions of herself as they serve an angel and devil sort of purpose while at the dinner table, for one – but is unwilling to commit to them throughout the entire story. Instead, it feels very much like a TV movie in the traditional sense, with nothing remarkable to be found in its filmmaking.

“Hello, Goodbye, and Everything In Between” is fortunately under 90 minutes long but still manages to get a bit lost in the middle before its insufficient wrap-up. It’s only the natural likability of the cast that barely saves the film at all, even though the writing does everything it can to make these characters unlikable. Ryder and Fisher sure have considerable acting talent; however, “Hello, Goodbye, and Everything In Between” is a disappointment for anyone hoping for a new classic Netflix high school romance film.