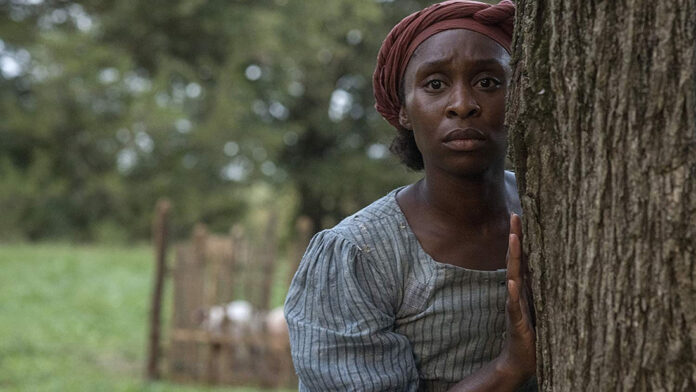 THE STORY – From her escape from slavery through the dangerous missions she led to liberate hundreds of slaves through the Underground Railroad, the story of heroic abolitionist Harriet Tubman is told.
​
THE CAST – Cynthia Erivo, Leslie Odom Jr., Joe Alwyn & Janelle Monáe

An on-screen portrayal of Harriet Tubman and her story has been long overdue. While “Harriet,” directed by Kasi Lemmons, might not be a perfect film, it’s certainly one worth watching to learn more about the woman who escaped slavery only to return to the South intermittently as an Underground Railroad conductor. Cynthia Erivo breathes life into the role of Harriet Tubman, capturing both her fear for her family and her determination to “live free or die.” ​

The movie starts just before Tubman’s escape to freedom, as the owner of the plantation dies and his son Gideon (Joe Alwyn) takes over. Her father and husband are freed black men, and while her mother was meant to be freed when she reached the age of 45, she was not. To save herself from being sold down South away from her family, she decides to run. The film then follows Tubman as she builds a new life for herself in Philadelphia, helped by abolitionist William Still (Leslie Odom Jr.) and boarding house owner Marie Buchanon (Janelle Monáe).

Our titular heroine experiences visions that she believes are sent to her by God, which help her escape and also urge her to return to the South to help her family escape to freedom, as well. These visions, though not particularly well portrayed, are at least accurate, as Tubman did have visions (or seizures) that she believed were from God after sustaining a head injury as a young girl. In fact, while it does take creative liberties, the film is surprisingly historically accurate. The religious content of the film might turn some viewers off, but Tubman was a deeply religious woman.

The film continues as Tubman returns to the South, again and again, finally becoming an official conductor of the Underground Railroad, a system of black and white people who worked to help slaves escape to freedom in the North. The film builds tension well as stakes remain high, even as Tubman repeats the journey she has done before, but with a different set of family and friends. The movie tends to focus more on the emotional rather than the physical hardships of slavery. It has a PG-13 rating, rather than an R rating which reflects the fact that, while there is violence, it’s not as extreme as seen in some movies that look at slavery. Instead, it’s the strain on and injustice of what slavery does to families that are at the forefront.

The screenplay was written by Lemmons and Gregory Allen Howard, and while it has weak spots, it also creates some powerful moments. The film keeps its audience engaged as the looming threat of capture hangs over Tubman. The film includes the singing of spiritual songs, like those popular during that era, and they’re beautiful even if it doesn’t always feel completely well integrated. Erivo, known for her work on Broadway, has a beautiful voice and Tubman did use songs to send hidden messages to those she was helping to escape.

Erivo’s performance as the title character is by far the best part of the film. She perfectly captures Tubman throughout each stage of her life that’s explored, particularly in her body language. She initially seems similar to Erivo’s portrayal of Celie in “The Color Purple” on Broadway: mild and faithful. However, throughout the film, she transforms into a strong, fierce woman who wields a gun confidently against anyone who dares question her. Her accent work is particularly impressive considering that she is British. Without a doubt, it’s a performance that is worthy of recognition from the Academy.

The supporting cast is solid, with one exception: Joe Alwyn is appropriately menacing as Gideon Brodess, the plantation owner. Brodess and Tubman have a contentious relationship; they grew up together on the plantation. It’s an interesting dynamic to explore and “Harriet” never tries to redeem Brodess (thankfully), but it does show that because of their history, his horrible actions are more personal and even perhaps feel more like a betrayal. Tubman’s owner did have a son named Jonathan, but Brodess was largely invented perhaps to create this stark reminder of the personal nature of slavery.

Leslie Odom Jr. is charming and elegant as abolitionist, writer, and freeman William Still. Janelle Monáe is similarly dignified as the boarding house owner Marie Buchanon, who becomes Tubman’s close friend. They are both underutilized in the film, though Monáe has a heart-wrenching scene in the second half that allows her to truly prove her acting skills.

The clear weak spot of the cast, and perhaps this whole piece, is Jennifer Nettles (yes, of the band Sugarland), as the plantation owner, Eliza Brodess. Her accent is patchy and her acting is amateur. It makes her big scenes feel a bit laughable, rather than showcasing the horrible way that white women were equally complicit in slavery.

The costume design by Paul Tazewell is the film’s strongest technical element by far, especially the way that the costumes create contrast between the clothing Tubman and others wear as slaves and the outfits they wear as freed people in the North. The score by Terence Blanchard feels overly dramatic and sometimes actually takes away from the more serious moments. The editing by Wyatt Smith is similarly subpar, particularly around Tubman’s visions. On the other hand, John Toll’s cinematography has really lovely moments especially with all of the outdoor shots throughout the woods and rivers.

Many people have said that “Harriet” is a generic biopic. In a way, that is true as it doesn’t push the boundaries of the genre; however, it seems unfair to dismiss the entire film for this, especially as so many generic biopics about white men don’t have the same level of criticism applied to them. While “Harriet” may not be a masterpiece, it’s worth seeing for its fantastic lead performance and its important message. It depicts the story of a legendary figure in American history who is too often relegated to the sidelines – or a single line in a history textbook. Harriet Tubman’s story deserves to be told.