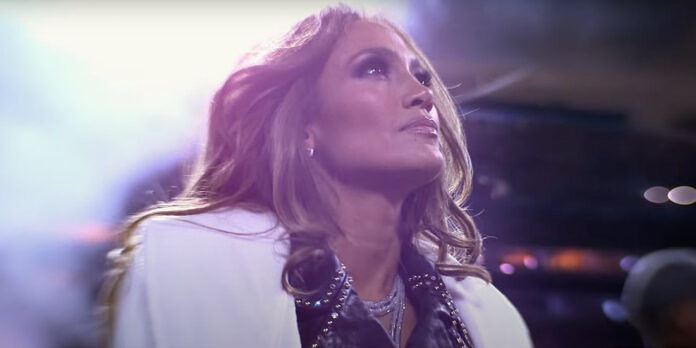 THE STORY – An intimate look at Jennifer Lopez as she reflects on her milestones and evolution as an artist, and navigates the second half of her career continuing to entertain, empower and inspire.

​​​​​​​​​​The pop star documentary is a time-tested format. For decades, major pop stars have used it to market themselves and their latest projects under the guise of pulling back the curtains and letting audiences into their (carefully curated) inner lives as they prepare for their latest album and/or concert tour. “Halftime” varies from this format slightly, mainly because its subject, global superstar and multi-hyphenate Jennifer Lopez, is not selling an album or tickets to a concert. The film focuses on a period from late 2019, not long after the actress celebrated her fiftieth birthday, through early 2020, when she performed at the Super Bowl LIV Halftime show, arguably the biggest stage in the world. It’s a show that we all watched for free and that we all know was successful. What’s most impressive about Amanda Micheli’s film is that it places us right alongside Lopez as she starts to give voice to a long-quiet side of herself and fights for that voice to be heard by the nation.

This time spam was a pretty prolific period for Lopez. In the course of roughly four months, her film “Hustlers” premiered to rave reviews at the Toronto International Film Festival; she got a massive amount of Oscar buzz for her performance (including receiving nominations from the Golden Globes, SAG Awards, Critics Choice Awards, Independent Spirit Awards, and a win from the Los Angeles Film Critics Association), she walked in a Versace fashion show during Milan fashion week (modeling an updated version of the green dress that launched Google Images), founded a collection of sunglasses, and filmed the romantic comedy “Marry Me,” all while prepping for the Super Bowl Halftime show, which she co-headlined with Shakira, while still being an active mother to her young children. The film doesn’t go into all of this, centering its narrative on the titular performance and using the “Hustlers” awards run as a secondary narrative in order to explore what it means to be an entertainer who also happens to come from an underrepresented community.

There has never been someone in the world of entertainment like Jennifer Lopez—true triple threat actor/dancer/singers are rare enough, but to have a legitimate claim to superstardom through both a music and film career puts one in the realm of the truly legendary (think Elvis, Sinatra, Garland, Cher). But to do so as a woman of color, well, it is pretty much just J. Lo. Lopez is acutely aware of this and spends most of her interview segments talking about how she feels the need to make a political statement with the Halftime performance for the first time in her life. The decision to have children sing the beginning of “Let’s Get Loud” from cages of light came from her, a response to the reports of children being separated from their parents at the US-Mexico border and kept in cages. The most heart-rending scene in the film isn’t when Lopez loses the Golden Globe or fails to get an Oscar nomination, but when she is on the phone with the NFL a day or two before the big performance, fighting for not just her artistic vision but to give both herself and Shakira the time they deserve as international superstars.

The fact that this issue gets resolved off camera is a bit of a disappointment, but this is pretty much the only narrative hiccup in the film’s admirably tight 95-minute run time. Micheli and editor Carol Martori do an excellent job of contextualizing Lopez’s career and giving her family history in short but impactful segments that always deepens our understanding of her and the film’s narrative. It is a pity that while the film’s focus is crystal clear, its cinematography is often not, giving a fuzzy look to the majority of the frame with only Lopez herself in focus. This might have been a case where the filmmakers sacrificed high-quality footage for access, though, and it’s hard to argue with the access they got. We get to see Lopez at home, in the studio, backstage at various events, in cars and planes, fittings and rehearsals. We see her with and without makeup, with and without her daughter, with her team, and by herself. We even get her in our nation’s capital preparing to sing “This Land is Your Land” at Joe Biden’s inauguration, a perfect little coda to the Halftime performance. “Halftime” may be as carefully curated as any other pop star documentary, but it’s hard not to be moved by Lopez’s journey, and by that journey’s end, you really do feel as though you know her better. She’s not waiting for tonight anymore. Her time has come, and she’s getting loud. And the world is finally ready for her.