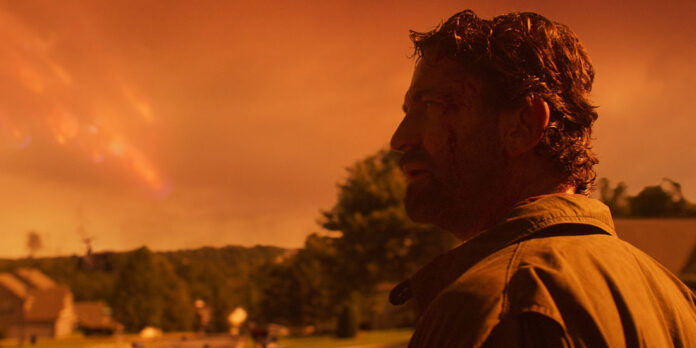 THE STORY – John Garrity, his estranged wife and their young son embark on a perilous journey to find sanctuary as a planet-killing comet hurtles toward Earth. Amid terrifying accounts of cities getting levelled, the Garrity’s experience the best and worst in humanity. As the countdown to the global apocalypse approaches zero, their incredible trek culminates in a desperate and last-minute flight to a possible safe haven.
​
THE CAST – Gerard Butler, Morena Baccarin, David Denman, Hope Davis, Roger Dale Floyd, Andrew Bachelor, Merrin Dungey, Holt McCallany & Scott Glenn

​It’s hard not to go into it with any movie, with some sort of preconceived notion of what you’re going to see. So, when I began “Greenland,” a disaster movie starring Gerard Butler, I’m sure it won’t surprise anyone to hear that my expectations were reasonably low. However, it didn’t take long for the movie to show itself to be far more impactful and enjoyable than I ever could’ve predicted. I genuinely can’t remember the last time a movie surprised me as much as “Greenland” did.

Don’t worry too much about the apparent concept of the film. There’s a comet coming for Earth and it’s going to cause a mass extinction. What the movie is really about, however, is the variety of ways people react to catastrophe. The film follows John Garrity (Butler) as he desperately tries to guide his wife Allison (Morena Baccarin) and son Nathan (Roger Dale Floyd) to safety. Just as the first part of the comet is about to collide with Earth, John receives an emergency alert telling him that he and his family have been selected for emergency shelter relocation. Their journey to this safe haven goes predictably awry.

The key to the movie’s shocking effectiveness is how it realistically portrays the different methods of response and reaction in the face of doom. While the family is firmly fixed at the center of the movie, they are always surrounded by different groups of people who show a wide array of survival strategies. This is made clear early on with the film’s first significant set-piece at the military base to which the family has been instructed to go. Once there, they find a mess of bureaucracy and a sloppy, unfeeling governmental response. When this is combined with the desperate crowds’ selfish and stupid acts, the film actually manages to make me forget about the impending cosmic destruction because the frustrating response of humans is momentarily more stressful than a space rock hurtling towards the Earth. There are plenty of examples of humanity’s more disappointing tendencies on display in the movie, which director Ric Roman Waugh captures in a gritty, grounded way. And in all of these moments, it’s hard not to be reminded of the pandemic in which we currently find ourselves in. At least in America, the confusion, ineptitude, and apathy that our federal government has displayed across the past year have sometimes distracted from the fact that there is a deadly virus ripping through our country. “Greenland” perfectly captures the ways that our fellow man can sometimes be just as dangerous as whatever Mother Nature throws at us.

The movie inevitably leads to an explosion-filled finale, but it finds plenty of quieter moments to slow down and reflect along the way. Most notable of these is a shockingly graceful scene at a pharmacy that shows looting as a necessary act of survival in a dire situation. I don’t know if I’ve ever seen a movie depict it in this way. Customers are even seen politely letting each other pass in the aisles as if this were a typical shopping excursion for the characters – problems only arising when greed and violence take over the store.

Unfortunately, the film’s bombastic final act is where it begins to lose track of its contemplative tone and truthful themes. It becomes a bit perfunctory in its action-movie beats. Our main characters start to exhibit some aggressive survivalist behaviors that the movie was previously careful to frame as selfish and unproductive. The script also finds itself on shaky ground whenever the family has reflective conversations. It can’t help but tiptoe into cliche. However, even though she is often hampered with questionable dialogue, Baccarin delivers a sturdy, emotional performance. Her fear and frustration are always believable.

For most of its runtime, “Greenland” surprises at just about every opportunity. It continually takes every decision that a mindless disaster movie might make and does the complete opposite. The full range of our species’ response to disaster is on display: some panic, some party, and some look for an opportunity no matter the moral cost. Humanity is just as much a threat to the main characters as an extinction-causing comet.