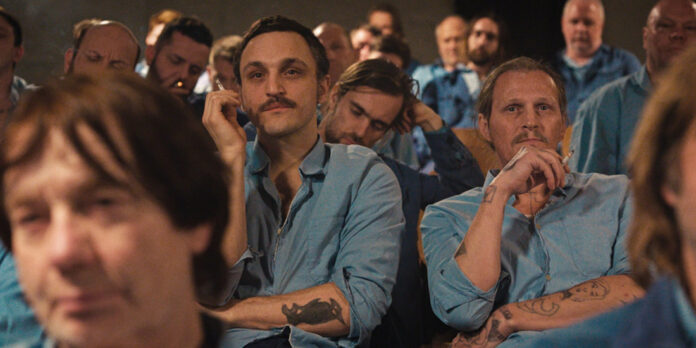 THE STORY – In post-war Germany Hans is imprisoned again and again for being homosexual. Due to paragraph 175 his desire for freedom is systematically destroyed. The one steady relationship in his life becomes his long time cell mate, Viktor, a convicted murderer. What starts as revulsion grows into something called love.

It can be incredibly difficult to find inventive ways to tell a story that exists within a genre that has become quite familiar. This is true with many archetypes of storytelling, and it’s not the easiest task to take what could be pedestrian and predictable and make it a compelling piece of work. In the case of “Great Freedom,” it aims to craft an intimate character study set within the walls of a prison. Obviously, this is a concept that is not terribly unique and can be riddled with clichés within a hollow plot. Thankfully, the creatives behind this film are able to construct a beautifully earnest portrait of damaged souls in pursuit of a better life, carried masterfully by an excellent performance in the center.

The film centers itself around Hans Hoffman (Franz Rogowski), a gay man living in Germany who is constantly being arrested and jailed for homosexual activity that has been made illegal at the time. He first arrives after being liberated from the concentration camps after World War II but finds himself returning to jail off and on throughout a time span of over twenty years. He takes several lovers while incarcerated, including a man he shared a life with before one of his subsequent arrests and a teacher he propositioned in a lavatory. His one constant companion is his friend Viktor (Georg Friedrich), a convicted murderer and drug addict whose relationship with Hans evolves from antagonistic to caring. Throughout the decades, Hans finds meaning in every relationship on his journey towards self-fulfillment.

As noted, there have been several prison dramas in the past that have even sought to explore similar themes and characters, but director Sebastian Meise creates an engaging piece all the same. The style feels more observational, not particularly flashy save for a few sequences with more innovative camerawork and staging. What his efforts primarily accomplish is an intimate sense of place in this world with these individuals. The filmmaking effectively places the audience right inside the emotional perspectives of the people living in these harsh environments. As the film plays with the structure of time, it can be a bit jarring at points to orient oneself within the narrative, and that disrupts the natural flow. However, these moments, fortunately, don’t linger and still manages to be a great showcase for how Meise’s directorial decisions can unfold this story in an intriguing manner.

The screenplay by Meise and Thomas Reider is also an emotionally rich text that can be appreciated for its creative structure and thematic commentary. Given that events are not told linearly and also are segmented into specific time periods, there is an awful lot of emotional connections that have to be sold in an economical method. The script does this through its rich characters that exist within genuinely endearing relationships. This story also capitalizes on a resonant theme of incarceration. This is not only on the physical means but the mental as well. Hans, in particular, is a man forced into isolation simply for who he is, and his search for freedom is never-ending. Every time he enters and exits solitary confinement, it’s yet another imprisonment leading to a newfound sense of liberation. The laws that banned homosexuality reveal the hardships of living one’s true self, even in the emancipated post-war West Germany. All the characters do inhabit this theme, but it’s not felt as poignantly as it is with its protagonist. Even when nuance is occasionally evasive within the screenplay, the way it captures this portrait of yearning for internal happiness is sincerely realized.

As accomplished as the storytelling is, it is the performance from Rogowski that is the true marvel. He displays an incredible amount of range with his portrayal, demonstrating both the physicality and emotional depths to be entirely captivating. When he first arrives, his weakened and frail state communicates so much of the suffering he’s endured, and he commands the screen with a powerful presence. As time moves on, Rogowski morphs his performance into arenas of charm as well as genuine heartbreak, with a keen frequency that makes him an alluring figure. There isn’t a moment where he is not entirely mesmerizing, as he is able to convey so much layered complexity etched across his face and movements. As the only other notable member of the cast, Freidrich does embody an impressive stoicism masking an earnest vulnerability, though his role is not the most enthralling in comparison. The more minor roles from the ensemble are not anything extraordinary, but they serve the film well and work best to highlight Rogowski’s additional talents as a scene partner.

The initial setup of “Great Freedom” may seem conventional on the surface, but there is a deep tapestry of profound commentary that lies beneath. The bonds that are shown between these men are fascinating and authentic. At the same time, the interrogation of Germany’s malevolent history leads to thoughtful revelations on the subject of living life as one’s true self. The filmmaking and writing aid in this endeavor, and Franz Rogowski’s brilliant performance guides one all the way through to the stylish and fitting conclusion. The results are a beautiful piece of cinema with a tenderness that sustains long after the credits roll.