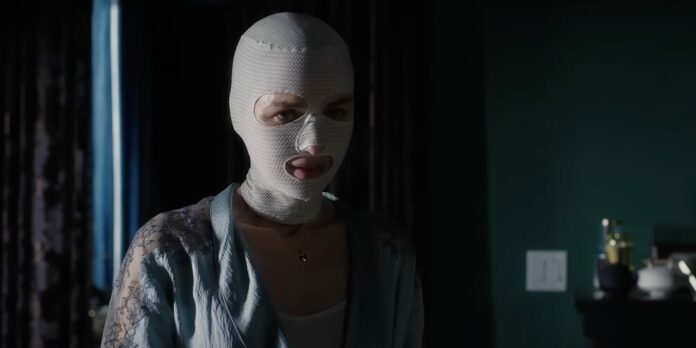 THE STORY – Twin brothers arrive at their Mother’s country home to discover her face covered in bandages—the result, she explains, of recent cosmetic surgery. As her behavior grows increasingly erratic and unusual, however, a horrifying thought takes root in the boys’ minds: the sinking suspicion that the woman beneath the gauze isn’t their mother at all.

Whenever a non-English horror film makes a splash, it’s usually only a matter of time before an American remake is put into production. “Goodnight Mommy” is the latest such film, taking inspiration from the 2014 Austrian movie of the same name. Under the uncompromising direction of Severin Fiala and Veronika Franz, that original film is a brutal exploration of a beyond-strained familial dynamic. This remake follows the exact same storyline but with a decidedly more palatable tone and easier-to-swallow content. Clearly, this was made with much more audience-friendly intentions, which isn’t necessarily a good thing.

As in the Austrian original, the film is told from the perspective of a pair of twins – Elias (Cameron Crovetti) and Lucas (Nicholas Crovetti). They’ve been dropped off by their father (Peter Hermann) and placed in the care of their mother (Naomi Watts). But something is different about Mother. Her face is completely bandaged, ostensibly because of a cosmetic procedure. Beyond the physical change, her personality and behavior also seem to have completely altered. All signs point to her having been replaced with an imposter, and the two boys are prepared to do whatever it takes to find out the truth of their mother’s identity.

The previous version of this story is a proudly shocking film, with a notably uncomfortable ending that doesn’t pull any punches. It’s an ultimately hollow movie, predicated entirely on several twisty plot points that aren’t compelling enough to support an entire film. Without a worthwhile story, it just ends up being a nasty experience without much to say. The American remake isn’t any different in that regard, covering the same ground in terms of broad story beats. However, it’s far less vicious in how it goes through these plot points, softening the more explicit images and situations.

Instead, this “Goodnight Mommy” is aimed squarely at the kind of audience member who might be looking for something vaguely spooky but not too intense to watch on a streaming service. Everything about the film is less hard-edged; even the bandages that Mother wears are less grisly, more closely resembling an editorial fashion accessory than something medical. Worst of all, it has replaced the most horrifying reality-based instances from the original with an overabundance of nightmare sequences laden with CGI and out-of-place images. Clearly, these are meant to keep an audience hoping for typical horror moments engaged.

Luckily, the film’s tone is still effective in keeping viewers on edge. Specifically, the first half of the film mainly comprises the two boys sneaking around and trying to get to the bottom of the mystery, constantly aware that their dreaded Mother could discover them at any time. These segments are delightfully tense, capturing the feeling of what it’s like to be a child, knowing that what you’re doing could get you into deep trouble.

As the titular Mommy, Watts is frighteningly compelling. She matches the mood of each scene perfectly, playing scary and sympathetic when needed. Both young boys at the film’s center make for captivating central figures. In particular, Cameron Crovetti gets several stand-out moments where he gets to show his impressive-for-any-age emotional range. Unfortunately, the film does not make a good enough case for its own existence as a remake of a noteworthy horror film. It really feels as if the only reason that this came about was to make a more digestible version of a horrifying movie aimed at a wider American audience. And no matter what one thinks of the original, that’s not a sturdy enough foundation on which a movie can be built.

"GOODNIGHT MOMMY"<b>THE GOOD - </b>Captivating performances and a tense tone may be enough for some viewers looking for a spooky time at the movies.<br><br> <b>THE BAD - </b>The rougher edges of the original Austrian film have been significantly sanded down, leaving behind a more palatable movie that ultimately feels like a pointless remake.<br><br> <b>THE OSCAR PROSPECTS - </b>None<br><br> <b>THE FINAL SCORE - </b>5/10<br><br>