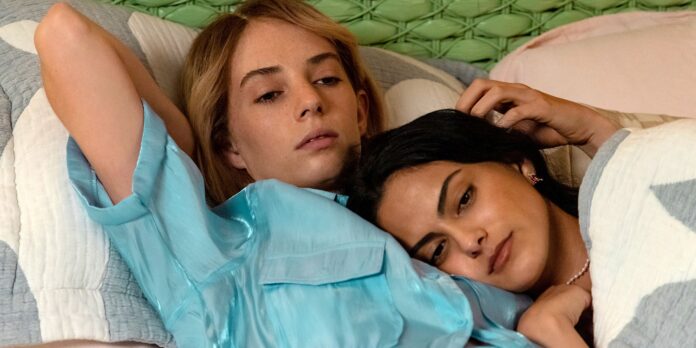 THE STORY – A dethroned queen bee at a posh private high school strikes a secret deal with an unassuming new student to enact revenge on one another’s enemies.

A month ago, after the release of “Bodies Bodies Bodies,” many noted how that film felt like a fresh depiction of Gen Z in modern entertainment for the first time in… forever. In many ways, it was the first film that actually got Gen Z girls. It did not reduce them to stock stereotypes, but it also did not forget their flaws – or how fucking awful we can be. It portrayed its protagonists in their full, occasionally pretentious, often problematic, overwhelmingly pompous glory, and as a result, it was a much more engaging and enjoyable experience for all involved because viewers didn’t feel like they were being talked down to or solely “torn apart” in a film for once. Some of the script’s most scorching lines may have hurt for how they made you feel “read,” but hey, I will take honesty over hokey clichés any day of the week.

Furthermore, now, only a few weeks later, Jennifer Kaytin Robinson’s “Do Revenge” feels like a spiritual successor of sorts to Halina Reijn’s “Bodies Bodies Bodies” (as well as a modern-day “Heathers”), as yet another film that accurately showcases just how sinister today’s teenage girls can be, but also how strong and supportive our sisterhood is when we are on the same team – and when we remember who the real enemy is (hint hint: the other 49% of the population). Robinson is not afraid to show the shocking lengths Gen Z girls will go to to get what they want – and she will make her protagonists temporarily terrible just to prove a point – but by the time “Do Revenge” reaches its chaotic and crowd-pleasing conclusion (delivering on its title in supremely satisfying fashion) we’re reminded that, although there is no one who can treat you worse than a teen girl, there’s no one who will better have your back as well – especially when you’re being beaten down by a boy.

When we start our story, Drea Torres (Camila Mendes) is facing social ostracization after a lewd video she sent to her boyfriend Max (Austin Abrams) was leaked to the entire school, seemingly by Max himself. And after Drea has a breakdown – that ends in her punching Max in the face – that only adds fuel to the fire. However, at the end of a solitary summer, she happens to meet the eccentric Eleanor (Maya Hawke), an incoming student at Rosehill High with her own bone to pick, having supposedly been wronged by another girl in their class named Carissa (Ava Capri), who, upon discovering that Eleanor was queer at a summer camp they both attended when they were kids, told everyone that Eleanor tried to “force herself onto her,” turning her into a predator and forcing her to abandon her old life entirely. Though they could not be more different on the outside, Drea and Eleanor are bonded by their thirst for vengeance, and they decide to “do” each others’ “revenge” for one another to get the job done and deflect suspicion at the same time.

With a script full of scheming, double-crossing, and everything in between, it could have been possible for “Do Revenge” to get too tied up in its twists and lose track of its central themes or characters. But, thankfully, Robinson has a rewarding resolution in mind this whole time (this is supposed to be a YA Strangers on a Train, after all), so even when tonal shifts and shocking plot turns may feel jarring in the moment, you can rest easy knowing you’re in the hands of an artist with a clear message to convey who leaves no stone unturned, and one who always has a reason to take this subversive story in whatever dizzying direction a certain scene desires. And above all else, Robinson’s character writing remains consistent throughout, perfectly capturing not only the wide array of pernicious personalities in Gen Z but also making each individual feel unique and distinctive simultaneously, particularly when it comes to Mendes’ Drea and Hawke’s Eleanor. There’s a certain soon-to-be iconic snappiness to her dialogue that continually invites engagement. These one-liners are not just amusing on their own but also feel congruent with the identity of the character delivering them, making the expression all the more entertaining.

Speaking of Mendes and Hawke, while Robinson is to be commended for her vibrant creative vision and assembling all the manic moving pieces of this plot (along with costume designer Alana Morshead and production designer Hillary Gurtler for brilliantly bringing the film’s acerbic pastel aesthetic to life), “Do Revenge” lives or dies by its ensemble. Thankfully, there’s nary a weak leak to be found here. Mendes is perfect at playing a stereotypical self-centered high school “mean girl” who is nevertheless slightly sympathetic as a result of having been wronged by her egotistical ex-boyfriend, and she oscillates deftly between these two identities – the tormentor and the tormented – in a way that few actresses could effectively pull off. Hawke is perhaps the MVP, though, as the empathetic Eleanor, retaining that “adorkable” relatability that makes her Robin such a fan favorite on “Stranger Things” (and she even gets to veer into campier territory with the role in the third act – a transition she handles tremendously – though to say any more would be too much). And last but not least, Austin Abrams is absurdly good as the devilish douchebag who cares for no one but himself but comes across as so charismatic that almost everyone is too fooled by his good looks and “big words” to see what a little shit he really is.

“Do Revenge” does still contain many YA clichés and conventions – and at just under two hours, it may run a little long for the type of story it’s telling – but simply watching the trailer will let you know if you’re in the target audience for this or not, and if the style and story does pique your interest, then know that it delivers everything you could want and more – coarse comedy, thrilling twists and turns, and a little bit of romance, to boot – and that it stands near the top of this subgenre as one of the best teen comedies and satires to release in recent memory, thanks to Jennifer Kaytin Robinson’s fresh voice and vision, a scorcher of a script, and a uniformly excellent ensemble cast – led by what will undoubtedly soon be instantly iconic performances from Camila Mendes and Maya Hawke.

<b>THE GOOD - </b>The film is blessed with a uniformly excellent ensemble cast - with everyone fully committing to Jennifer Kaytin Robinson's terrifically trenchant tone - while Camila Mendes and Maya Hawke, in particular, carry the chaos with compelling chutzpah. Robinson's script is spectacularly scathing and stuffed with instantly iconic quotes.<br><br> <b>THE BAD - </b>A few tonal shifts and plot twists are jarring in the moment, but the film resolves itself quite well by the finale, even if it still feels rushed.<br><br> <b>THE OSCAR PROSPECTS - </b>None<br><br> <b>THE FINAL SCORE - </b>7/10<br><br>"DO REVENGE"