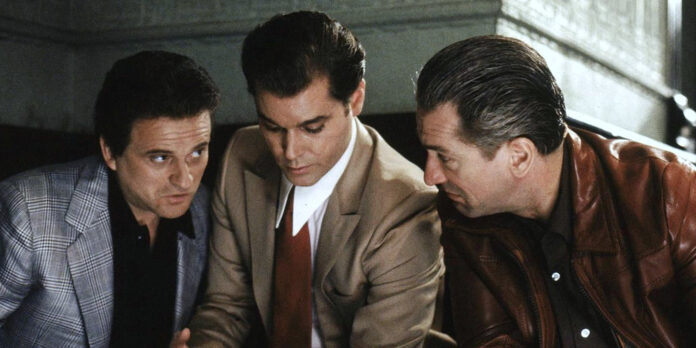 ​THE STORY – A young man grows up in the mob and works very hard to advance himself through the ranks. He enjoys his life of money and luxury, but is oblivious to the horror that he causes. A drug addiction and a few mistakes ultimately unravel his climb to the top. Based on the book “Wiseguy” by Nicholas Pileggi.
​
THE CAST – Robert De Niro, Ray Liotta, Joe Pesci, Lorraine Bracco & Paul Sorvino

“Goodfellas” is one of, if not the, greatest movies ever made about organized crime. A true “rise and fall” that throws us into a world of family, loyalty and betrayal, Martin Scorsese’s gangster masterpiece has often been imitated but never duplicated. He created a cinematic language that endures to this day, showcasing Italian American life over several decades that has found its way into pop culture ever since. It’s a true masterwork of storytelling, character, and immersion that rightfully stands as one of the best films ever made.​

Henry Hill (Ray Liotta) always grew up wanting to be a gangster. At an early age, he is introduced to Paul “Paulie” Cicero (Paul Sorvino), who he starts doing small favors for, and makes friends with James “Jimmy the Gent” Conway (Robert De Niro) and Tommy DeVito (Joe Pesci). As the years go by and Henry ascends in the ranks, the jobs become more dangerous, the body count starts to go up, and although there are times of joy and success, there are times of paranoia and horror. Henry increasingly becomes to feel his life and the life of his family may be in danger from this other family he has cultivated over the years.

What has always struck me about the story of Henry Hill is Scorsese’s handling of the morality of the story. This is a man who, as far back as he can remember, has always wanted to be a gangster. He didn’t want to deal with authority. He wanted the freedom to do whatever he wanted, whenever he wanted. However, Henry never wanted to be a murderer and throughout “Goodfellas,” he consistently finds himself in situations where he’s trying to prevent murderous violence from taking place. He’s trying to keep his friends from over-reacting, especially a hot-headed and unpredictable Joe Pesci as Tommy DeVito. By the time we get to the film’s third act, Henry himself is potentially on the receiving end of violence from his own friends. Paranoid, exhausted, and while flawed, because of the things he’s caused and the things he has done, we still feel for him. Scorsese wisely shows us many of the good times these wiseguys have with one another before he strips it all away in the film’s second act. The romanticism on display in this first half is intoxicating and vividly conveyed, down to the smallest details such as how slicing paper-thin garlic into a sauce will make it taste better, to the luxurious clothes and cars these men own, to the laughs and good times they share as a close-knit family unit.

However, there is a reckoning that Scorsese perfectly sets up from the very beginning which we know is inevitably coming from living a life of crime. When Jimmy tells Henry, “Never rat on your friends and always keep your mouth shut,” Scorsese is setting up for the audience what will come to be for these characters, as they continue to push the envelope, take risks and become reckless in their greed and ambition. There is a bit of tragedy that plays out in the third act, especially when Henry pathetically comes crawling back to Paulie for money and support, after being warned by the careful crime boss not to get involved in drugs.

And my oh my, how about that drug-fueled third act? The editing on display by Scorsese’s longtime collaborator Thelma Schoonmaker is some of the best ever put to celluloid. Freeze frames, smash cuts, slow motion, all done with style but always in service to the story being told. It creates a kinetic energy that many films have tried to match over the years, but none have ever successfully been able to do. The film also features some of the best hand-picked music for a movie ever. And who could ever discredit Michael Ballhaus’ cinematography, with his elaborate tracking shots, continuous movement, frantic style, and infamous Copacabana single-take showstopper? Literally, every element of the production is firing on all cylinders here, to match the dynamite cast and the work they’re doing.

This is truly one of the best ensembles ever put to screen. So many of these actors have had their careers defined by their involvement in “Goodfellas” with many of them often getting typecast afterward. It’s a credit to how believable everyone is in their roles that it almost became impossible to separate them from their work on this film. Ray Liotta, still nearly thirty years later, has never had a better role than Henry Hill. Robert De Niro brings an authoritative presence to his role as Jimmy “the Gent” Conway. Lorraine Bracco is electric and stands toe to toe with every one of her male co-stars in an emotionally devastating role as Henry’s wife. And what else could be said about Joe Pesci? Whatever you do, don’t tell him how funny you thought he was in this or he might just whack you!

The violence in “Goodfellas” sneaks up on you. It presents itself in the most surprising of ways in the form of medium shots, slowing coming in from the edge of the frame or with a precise jump cut. The unpredictability, savagery, and shock of it, makes for an exciting motion picture experience that is filled with consequences, thus balancing out the likability with which Scorsese initially presents his characters. It’s an ugly world, filled with bad men doing bad things, but Scorsese also never fully presents them with black and white characteristics. That level of complexity and the immersion with which Scorsese introduces us to the world is why “Goodfellas” continues to resonate to this day. It stands as one of the best mob films ever made and going one further, as one of the best films of all time.

Powered by JustWatch
Share
Facebook
Twitter
Copy URL
Previous articleHow Best supporting Actress Could Go At Each Award Show
Next articleWho’s In The Hunt For Best Director This Year?