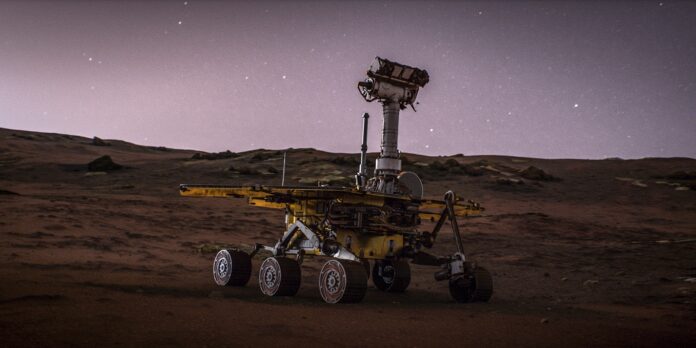 THE STORY – Charting the remarkable true story of Opportunity, a NASA exploration rover that was sent to Mars for a 90-day mission but ended up surviving for 15 years.

In 2003, NASA launched two rovers, Spirit and Opportunity, to the planet Mars to search for signs of life, specifically water. Their planned stay on the red planet was 90 days. Opportunity ended up traversing Mars for almost 15 years before it shut down. Ryan White’s film “Good Night Oppy,” tells the story of the adorable little Mars rover through interviews with the scientists and engineers who designed and operated her throughout her journey. Through bleeding-edge visual effects sequences designed by the wizards at Industrial Light & Magic that put the audience on the surface of Mars right alongside the rovers. These miraculous visual effects sequences – completely computer-generated – are the perfect metaphor for both the story of the rovers and the film itself: Creating something awe-inspiring out of almost nothing.

It is hard for the film not to feel like a rip-off of “WALL-E,” Pixar’s 2008 masterpiece about a robot tirelessly working to clean Earth of all its garbage. But then, Spirit and Opportunity had already been in space for five years before that film was released, so which really came first? But even still, it’s incredibly easy to attach human attributes to the Mars rovers, which have arms and legs and a series of cameras that look as close to a face as you can get without making an android. Because of this, the enthusiasm and love the film’s interview subjects feel towards Spirit and Opportunity are easy to understand. Blake Neely’s celestial score also helps with this, emphasizing the otherworldly magic of the rovers’ journey on Mars. But those interview subjects are the film’s not-so-secret weapon, each and everyone extremely personable, well-spoken, and endearing in different ways. This is their journey just as much as the rovers’, and White never forgets that.

The actual human element of the story is important, especially as they have to do most of the storytelling (while the rovers have great technical capabilities, they cannot speak). The journey of the NASA staff members is also moving, given how long Opportunity’s mission turned out to be. We watch as the engineers have children and teach them about the rovers and, in one particularly profound instance, watch one young woman brought in to watch the launch of Opportunity as a student become one of the NASA staffers directly working with the rover. Watching the ups and downs of the staff is heartwarming and offers a new level of appreciation for the amount of work these amazingly talented people have to do on a daily basis.

But even still, nothing about the human element of “Good Night Oppy” is as awe-inspiring as the magnificent visual effects work that brings Spirit and Opportunity – and the planet Mars – to life. While the Mars sequences look for all the world like someone built recreated versions of the rovers and moved them through some desert landscape somewhere (perhaps even a dirt-filled soundstage) built to approximate Mars, they are actually entirely digital, from the light of the sun to each speck of dust in the massive storms that threaten to kill the mission dead in its tracks several times over. It’s one of the most jaw-droppingly convincing pieces of movie magic in ages, and one that makes “Good Night Oppy” a documentary that kids might actually enjoy watching.

The story of the Mars rovers is a pretty incredible one; a story of the resilience of the human spirit and ingenuity that doesn’t even have a human in its lead role. “Good Night Oppy” is told rather conventionally and, perhaps, goes too hard for the obvious emotional moments. Still, it is very difficult to come away from feeling anything other than awe; for the work these people did, the work that could be accomplished, and the filmmaking on display. It’s not the most groundbreaking documentary, but it’s effective and one of the most entertaining documentaries in quite some time.