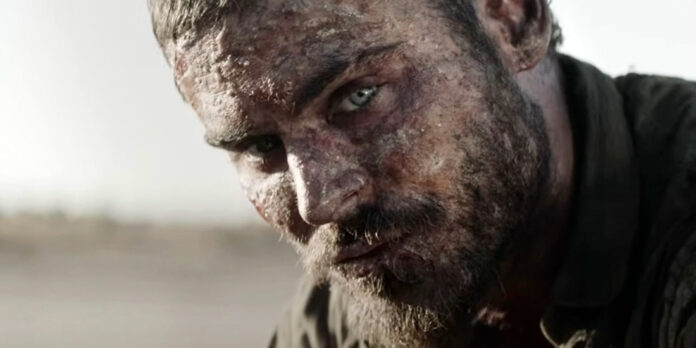 THE STORY – In the not-too-distant future, two drifters traveling through the desert stumble across the biggest gold nugget ever found, and the dream of immense wealth and greed takes hold. They hatch a plan to excavate their bounty with one man leaving to secure the necessary tools. The other man remains and must endure harsh desert elements, ravenous wild dogs and mysterious intruders while battling the sinking suspicion that he has been abandoned to his own fate.​

​Survival is a conflict that can be experienced on a variety of levels. There are often external forces at play in which the path to success is interrupted by the physical altercation with an antagonistic element. There can be internal struggles that reveal a deeper mental turmoil that must be resolved through self-reflection. One can even find the natural world an arena where one has to persevere through unkind circumstances beyond control. This all can be the premise for riveting exploration, and “Gold” is a film that sets itself in the center of the many facets of a survival tale. Unfortunately, it ends up being a mainly dull and monotonous exercise that fails to ignite any spark of engagement.

Set in a near-future that takes place in a dystopian wasteland, a young man (Zac Efron) has just arrived in search of a place known as The Compound. Here, he hopes to find work and some sort of stable life in a barren world. He pays another man (Anthony Hayes) to transport him by car through the days-long trek. When they randomly pull off to the side of the road one day, they make a surprising discovery. Embedded in the dirt is a massive gold nugget. Their attempts to remove the heavy metal, however, prove futile. The car owner leaves to retrieve an excavator, leaving the younger man alone to stay and watch over the gold. It is here he faces the threats of unforgiving weather, ravenous wildlife, suspicious scavengers, and his own fractured mind that is on the brink of insanity.

Efron’s career as an actor has included an array of diverse subjects but not any particular moment has allowed him to shine truly. This project places him front and center, but sadly it’s only to carry much of the film’s dead weight. In fairness, Efron does a serviceable job at portraying a quiet man with an internalized battle, and he authentically captures a damaged psyche that is steadily losing control. Still, there is not much else to this character, and his abilities as a performer do not create any more of a captivating portrait to witness. The same can be said for the sparring supporting roles, as Hayes also barely leaves an impact in a subdued turn. Susie Porter brings an alluring presence as a nosy scavenger, but her brief appearance only temporarily breaks up the monotony and is severely underutilized.

The environment that surrounds these actors is nowhere near that enticing either. Hayes is also the director and co-writer of the film, and his attempts to assemble this piece with any sort of intrigue are severely lacking. The morose tone and dreary color palette are obviously intentional, but it is also the foundation for a languid pace that crawls from scene to scene with little momentum. The world-building lacks a necessary nuance in the details to elevate the setting beyond the standard presentation of vast desert landscapes. The tension is shallow and flat, only contributing to more frustrations with such a banal narrative. The only craft of the film worthy of high praise is the striking makeup design to communicate the effects of such harsh conditions. Still, the storytelling often conveys a mundane mood that is not so inviting.

The set-up to “Gold” is one that had the potential to be a compelling story that emphasized absorbing filmmaking and engaging performances. It is a shame that the execution leaves much to be desired. It is difficult for one to look past the sluggish energy that penetrates every frame, which in turn only emphasizes the opaque characterizations and tedious drama. Not even the actors can salvage the material as even the central role barely registers anything more than the bare minimum and does not become a dynamic presence. The film may exist in a pantheon of other survival stories, but to witness this particular demonstration is a grueling act itself.