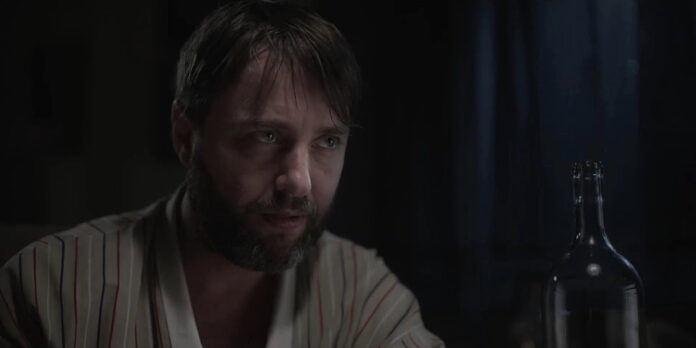 THE STORY – Driving home during a rainstorm, Glen experiences car trouble and gets help from a strange couple that gives him an offer he can’t refuse. At the same time, Katie is feeling weighed down by a secret and a medical practitioner questions an experiment.

​​What if everything we thought was our reality was a suggested state brought on by someone else? How would you even begin to process that, and what would your reality actually look like? That mind-blowing idea is the basis for Rob Schroeder’s bold “Ultrasound,” which takes everything you know about the movie at the start and flips the switch multiple times throughout the runtime. Like “Inception,” it’ll make you question if what you’re seeing is real or not, and thanks to a solid script from Conor Stechschulte, it works most of the time.

It’s a dark and rainy night, and Glen (Vincent Kartheiser), a young man returning home from a wedding, gets a flat tire. He knocks on a nearby home, and he’s greeted by a friendly middle-aged man, Arthur (Bob Stephenson), and his younger wife, Cyndi (Chelsea Lopez). Arthur welcomes Glen into their home, offering him a change of clothing, drinks, and even a place to sleep that night until they can get his car fixed up in the morning. All seems well, but things start to change ever so slightly. One minute Cyndi is sitting at the table, and the next, she’s gone. Glen also starts getting confused about where he and Arthur are sitting and talking, whether they’re at the kitchen bar or dining room table. It gets even more bizarre when Arthur basically begs Glen to sleep with his wife, which Glen kind of can’t refuse. A bit after this encounter, Arthur tells Glen that Cyndi is pregnant, and it’s likely Glen’s child.

Elsewhere, a young woman named Katie (Rainey Qualley) is also dealing with some strange events, though she doesn’t seem to notice the biggest one of all: her giant pregnant belly. We also question it ourselves too at times. When she’s looking at herself in a mirror, she doesn’t look pregnant, but in other moments it’s there, and others notice it too. How is that possible? She’s also in a secret relationship with Alex (Chris Gartin), who is on a reelection campaign for his Senate seat, and the last thing he needs is news of a secret love affair or pregnancy to get out.

At the same time, we’re introduced to Shannon (Breeda Wool), a medical professional, taking part in an experiment in a research facility. Things are confusing at first – like how Shannon and her colleague Dr. Conners (Tunde Adebimpe) are reciting lines that Glen and Cyndi said in a previous scene – but slowly, we wrap our brains more around the concept that things are not what they seem here. Somehow Glen and Cyndi are in this facility, though Glen is in a wheelchair now, and Cyndi is no longer pregnant. Again, how is all of this possible? What Glen, Cyndi, and Katie don’t know is that their perceived realities are actually something quite different, all thanks to one central character.

There’s a lot to try to understand with this movie, which makes it a bit overwhelming at times, but a lot of credit needs to be given to Stechschulte for such a creative script. At first, the movie moves slowly, and you’ll wonder what any of it is leading to, especially when the three different storylines are introduced that don’t seem to have anything in common. But as Stechschulte slowly reveals the common denominator among all of these stories and the manipulative power that exists, it’s kind of mindblowing. Everything you see can’t be trusted, which becomes more important as characters’ realities become harder to keep track of. While there are moments where the movie would have benefitted from further explanation, mainly the concept that Shannon and her colleagues are experimenting with and how it’s even possible, it’s still so thrilling to see someone put out a script that’s so bold and original. You do have to really pay attention to this movie, though, and it will likely benefit from a rewatch to truly understand all of its twists and turns.

Actors also need to be commended for their performances in this, especially Kartheiser and Lopez, who are literally fighting to understand what is going on with them. If they weren’t on their A-game with really selling how insane this movie gets, it certainly wouldn’t be as entertaining or exciting to watch. Stephenson also goes all-in with his layered character. Cinematographer Mathew Rudenberg also plays with many angles and colors to play up the disorienting feeling at times, while Zak Engel’s menacing electric score is chilling.

While it might take some time to get into Schroeder’s drama, it’s one that definitely pays off as you keep watching. With a solid script, cast, and technical elements that add so much to the overall uneasiness at times, it’s one of the early surprises of 2022 that will get many talking. Its boldness is one to beat this year, and it’s refreshing to see something as creative as “Ultrasound” be made. Hopefully, Schroeder and Stechschulte will provide even more fun with their future projects.