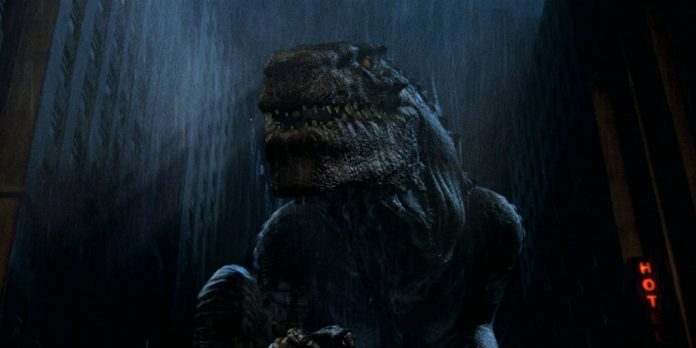 ​It’s easy to go back and re-visit the 2014 reboot of “Godzilla.” But what about another version from the late 90s that stands out even more as a product of its time? While the character of Godzilla has been around since 1956, America somehow didn’t get its hands on it until 1998 and inexplicably decided to give the task of creating the first American contribution to the iconic franchise to Roland Emmerich. A man who directed some of the more memorable (for one reason or another) disaster and action films of the ’90s including “Independence Day,” “Stargate” and “Universal Soldier.” He has said that he was never a big fan of the series and unfortunately it is all too obvious when you watch his film. He discards the traditional role of Godzilla as either hero or villain in favor of creating something meant to be closer to an instinctual animal, but it fails miserably. From the horrific redesign of the character to the predictable plot to the questionable special effects that have aged poorly, “Godzilla” is rightly derided as one of the biggest flops of its era.

“Godzilla” encapsulates the pop culture of the 90’s while also creating a story that reeks of early nostalgia, something that would come to define the years after it. It is decidedly a pre-9/11 movie, with no shame about making fun of the US military and an over the top glee when destroying the New York skyline that is hilarious and fun to watch while also being a bit shocking in today’s day and age. Its cast includes three members of “The Simpson’s” voice acting team (Harry Shearer, Nancy Cartwright, and Hank Azaria) as well as Matthew Broderick and Jean Reno is one of his comedic turns, all of whom are doing their best with a subpar script but still managing to fall flat. “Jurassic Park” was released in 1993 and “Godzilla” owes every tense moment in the film to director Steven Spielberg’s efforts. From the T-Rex chase to the hunting raptors it shamelessly steals all of the best moments and recreates them like a cheap SyFy movie.

Roland Emerich tried to create something entirely new within the “Godzilla” franchise, which is usually an admirable thing to do with an IP that has been employed so heavily over the past 40 years, but with this film, he completely missed the entire point of the franchise and ended up making a generic Kaiju film instead. At the heart of the “Godzilla” films is a message of environmental awareness and humanities relationship with its planet. Emmerich’s “Godzilla” never really dips into these ideas and instead chooses to opt for the simpler concept of a big scary animal.

Despite all of these criticisms, “Godzilla” is still kind of fun to watch. There are some ridiculous moments that you can’t help but laugh at, such as when Godzilla humps a skyscraper in celebration of their cleverness at blowing up several American military helicopters. The special effects are all over the place, with the practical effects being leagues better than the CGI, an early example of hyperrealism by a fledgling company who was way out of their league which makes for a fascinating contrast.  For those who like to watch a trainwreck in slow motion, “Godzilla” is an enjoyable experience but for everyone else, it will be a repetitive slog.

What are your thoughts on Roland Emmerich’s “Godzilla” (1998)? Have you seen “Godzilla: King Of The Monsters” yet? I If so, what do you think? Let us know your thoughts in the comments section below or on our Twitter account.