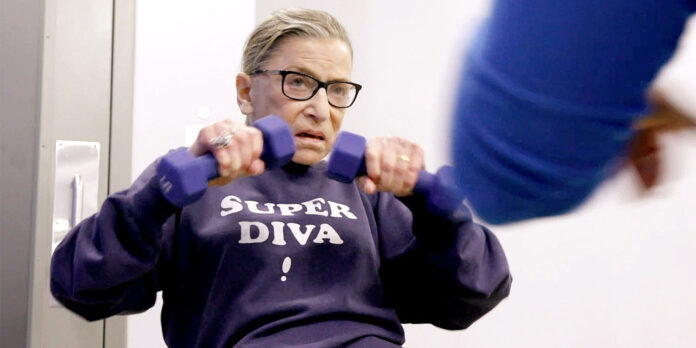 THE STORYAn intimate portrait of an unlikely rock star: Justice Ruth Bader Ginsburg. With unprecedented access, the filmmakers explore how her early legal battles changed the world for women.

“RBG” opens with a montage of statues peppering Washington DC, each portraying a significant male figure in American history as soundbites from male political pundits and politicians deride Justice Ruth Bader Ginsburg as “anti-American” and “a zombie.” Notable among those voices is President Donald Trump. But much like the film’s titular steely-eyed subject, “RBG” quickly transitions to a hip-hop themed montage of the ‘notorious Ruth Bader Ginsburg” defying expectations, again and again, pumping iron in the gym, and appearing on tattoos, mugs, talk shows, and more. The message is clear: conservatives in America have often tried to buck against and crush Justice Ginsburg, but she will continue to serve as a vital, transformative voice in American culture as long as she is able.

Tackling a subject as well-known (And introverted) as Justice Ginsburg and still offering engaging and illuminating information has to be difficult. Fortunately, filmmakers Betsy West and Julie Cohen are more than up to the task, ingratiating themselves into the daily life of both Justice Ginsburg and her friends (And even her opponents). Meticulously researched, the film charts Ginsburg’s rise from a young law student (One of the first women ever admitted to Harvard Law) to law professor, and then firebrand litigator, and ultimately to Supreme Court Justice. Along the way, the film showcases her fairytale love story with her husband Marty Ginsburg, her 6 groundbreaking cases before the Supreme Court, her friendship with conservative Justice Scalia, her love for Opera, and her role as a mother and grandmother.

The documentary peers inside Justice Ginsburg’s head, exploring the shrewd strategies of a woman who is physically small and soft-spoken, yet who manages to bring many an overconfident male to his knees. One departs the theater, feeling as though they have a clear understanding of the strategies and motivations of a woman like Ruth Bader Ginsburg. The awestruck interviews with conservatives like Senator Orren Hatch demonstrate how Ginsburg has used her reserved nature to reach across the aisle effectively to perpetuate change.

There are few shocking realizations on display about Justice Ginsburg. Nor (A brief mention of the controversy surrounding a comment made about then-candidate Donald Trump aside) is there anything in the film that is short of Rapturous in describing Ginsburg. The entire documentary is almost an act of worship. And while controversy can often make for a more compelling viewing experience, the filmmakers here are aware they are already on the right side of history and do not feel the need to explore the other side. But perhaps, when a voice like Ginsburg’s is as important as it is during these times, having a piece that paints an almost saintly view of Justice Ginsburg is necessary, as opposed to something that hunts for controversy.

If the film plays it a bit safe narratively, it is still an incredibly satisfying watch. The viewer comes to feel as though they know side characters like Ginsburg’s husband, Marty, rather personally. And though anyone who has read a newspaper in the last eight years is already aware of his passing, the way the film delivers the news is heartbreaking. Ginsburg’s voice only ever waivers once in the film, and that is when she describes his death. After the thorough picture the film paints of Marty, the audience feels this sadness too.

The documentary also packs an unexpected amount of humor. Justice Ginsburg is often soft-spoken, but when she chooses to deliver a zinger, she does it with a ruthlessness that few others could aspire to. Her love of Opera and friendship with Justice Scalia is hilarious to behold as well. The technical aspects of filmmaking are nothing special but competently executed. The various court cases are depicted stylishly, with animated word art dancing around the Supreme Court room, while Miriam Cutler’s score is effective at heightening emotion without drowning the audience. In short, “RBG” is nothing groundbreaking, but it is a touching, effective portrait of one of the most vital figures in American history, and adds extra humanity to one of America’s most unlikely celebrities.

The Next Best Picture Podcast · Interview With The Directors/Producers Of "RBG," Julie Cohen & Betsy West
Powered by JustWatch

THE GOOD – A compelling, touching, and well researched look into one woman’s fascinating and impactful life.

THE BAD – Plays it safe narratively and never touches on any controversy with its subject.
​
THE OSCARS – Best Documentary Feature & Best Original Song (Nominated)