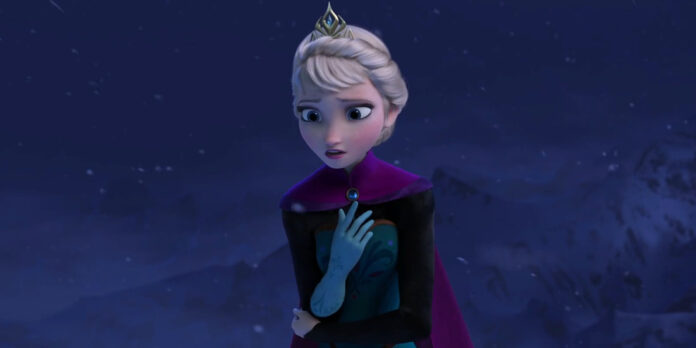 ​THE STORY – When their kingdom becomes trapped in perpetual winter, fearless Anna (Kristen Bell) joins forces with mountaineer Kristoff (Jonathan Groff) and his reindeer sidekick to find Anna’s sister, Snow Queen Elsa (Idina Menzel), and break her icy spell. Although their epic journey leads them to encounters with mystical trolls, a comedic snowman (Josh Gad), harsh conditions, and magic at every turn, Anna and Kristoff bravely push onward in a race to save their kingdom from winter’s cold grip.

​​It’s almost difficult to remember a time before the cultural impact of Walt Disney Animation Studios’s “Frozen,” even though it was only released eight years ago. When it first appeared onscreen in November 2013, the film did well with both critics and general audiences. It won awards and earned $1.28 billion worldwide at the box office. It was the year’s highest-grossing film and sparked both a short and a full sequel in 2019. What’s more impressive, though, than its numbers is the way that it permeated the culture. It was hard to escape hearing cover after cover of “Let It Go” and “Do You Want to Build a Snowman?” for an entire year. The following Halloween was full of little girls dressed as Elsa and Anna, and even Olaf. On my recent trip to Disney World, the line for the “Frozen” themed boat ride rivaled that of the largest roller coasters. “Frozen” enjoyed the kind of success that most films will only ever aspire to.

Co-directed by Jennifer Lee and Chris Buck, the film tells the story of two sisters born into a royal family in the Scandanavian land of Arendelle. Lee’s screenplay is loosely based on Hans Christian Anderson’s “The Snow Queen” fairytale. Elsa was born with magical icy powers that she doesn’t know how to control. After an accident as children, their parents decide it’s best to separate her from her precocious younger sister Anna. Bad parenting aside, it’s heartbreaking when the girls’ parents pass away in a shipwreck, and they’re left on their own. Years later, the castle is preparing for the opening of the gates in honor of the coronation of Elsa (Idina Menzel). Anna (Kristen Bell) is thrilled to interact with other people finally, notably a handsome prince she literally runs into named Hans (Santino Fontana). However, Elsa soon loses control of her temper and, thus, her powers. In frustration, she runs away and determines that she’s better off on her own where she can embrace her icy magic.

Unfortunately, she’s caused a blizzard to sweep over the kingdom, so Anna sets out to find her. Along the way, she encounters ice harvester Kristoff (Jonathan Groff), his reindeer companion Sven, and a snowman created by her sister named Olaf (Josh Gad). Olaf and Sven are both great sidekick characters, and Gad clearly has a ball with his very quotable comedic performance. Groff is also charming as Kristoff, a new Disney prince who seems more like “New Girl’s” grumpy Nick Miller than Prince Charming. The story takes many twists and turns before its big reveal that Hans is not the love interest but the villain. I remember people audibly gasping when I first saw this movie in the cinema in 2013, and it remains an impressively bold decision for a children’s movie today. Hans is such a fun villain, but I do wish that his motivations were more explicitly explained and that he got a proper villain song.

Bell and Menzel both give fantastic vocal performances, both in dialogue and in song. The movie’s music and lyrics written by Robert Lopez and Kristen Anderson-Lopez contain many hits that will likely one day be considered classics. While “Let It Go” and “Do You Want to Build a Snowman?” are certainly the most popular, “Love is an Open Door” and “For the First Time in Forever” stand out as excellent examples of moving the plot and building characters through song. Unfortunately, one of my main complaints about this film is that the songs are spaced out incredibly poorly. Most of them fall into the first half, with no songs occurring in the last section of the movie at all. Fortunately, the score by Christophe Beck does save the film from being completely devoid of music and is lovely.

“Frozen” is another example of the new computer-animated Disney style, and its character animation looks remarkably like “Tangled” from a few years before. While there’s some inconsistency in the rest of the work, the animation of ice, snow, and Elsa’s magical powers is stunning. The film does have several striking shots, like one in the opening prologue, which shows Elsa on one side of a door surrounded by her ice magic and then Anna on the other side alone.

Perhaps the best thing this movie does is break the Disney mold for what a princess movie can be. Elsa is the first Disney princess to be crowned in her own movie and deals with more mature problems than some of her predecessors. Anna is also an unusual Disney princess, more in the vein of Merida from “Brave” and Rapunzel from “Tangled.” She’s awkward, impulsive, and drools in her sleep — but all of this just makes her feel more real and approachable than the Disney princesses of years past. The film also subverts expectations by focusing on familial love between the two sisters rather than romantic love. It’s Anna’s love for her older sister, despite having been shut out for most of her life, that saves the day in the end. Anna also is able to save not only the kingdom and her sister but herself.

“Frozen” resonates differently now, after spending over a year in quarantine. It’s a film mainly about how two sisters deal with being isolated for most of their lives and how they adjust to being around people again. Even Hans is affected by his isolation imposed by his twelve older brothers. I’m sure I’m not the only one who’s had a few awkward Princess Anna moments learning how to interact with people again after being inside for months.

When it was released, “Frozen” took the world by (snow)storm, and it’s yet to let go entirely. It’s not without its fault — the maldistribution of its songs, the lack of explanation of Elsa’s powers, Hans’s motives not being fully explored — but all of that fades away for children watching it in the face of good music, the love between two sisters, and an adorable snowman. “Frozen” is a movie that will be looked back on in fifty years as a Disney classic.