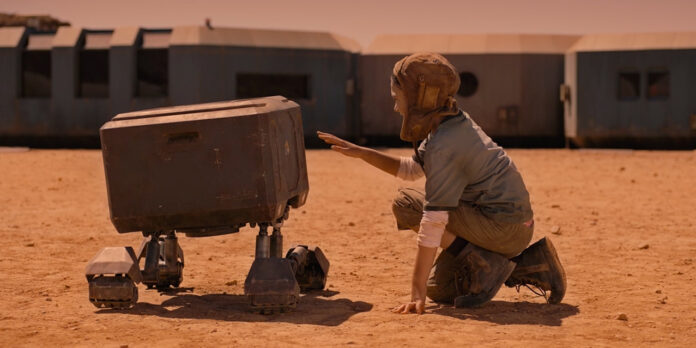 THE STORY – Mankind’s earliest settlers on the Martian frontier do what they must to survive the cosmic elements and one another.

​​​​​​​​​​A barren landscape. A research facility. A family of three. A mysterious invader. These are the key ingredients of “Settlers,” writer-director Wyatt Rockefeller’s debut full-length feature. Set on Mars in the near future, the film shrouds the backstory of its characters and the status of the world outside their home in mystery, making for an intriguing set-up. Reza (Johnny Lee Miller), Ilsa (Sofia Boutella), and their daughter Remmy (Brooklynn Prince) are living in an otherwise abandoned area of the red planet, in what looks like a research facility gone ever-so-slightly to seed. They’re able to breathe the air, grow plants, including vegetables in a greenhouse, and even keep a pet pig. Remmy is at the age when children begin questioning everything and want to go exploring, and one day she spots something unsettling on the horizon, prompting her parents to have a heated argument. The next day, she wakes up to find the word “leave” painted across the outside of one of their windows, and soon after, the family is set upon by three armed invaders, one of whom, Jerry (Ismael Cruz Cordova), survives and moves in.

Rockefeller’s screenplay keeps its cards very close to the vest, patiently doling out tiny bits of backstory across the film’s first hour. That patient storytelling is probably the film’s biggest strength, causing the audience to lean in and make sure not to miss anything. Combined with the long takes and quietly insistent and unsettling score, it creates a thrilling sense that anything could happen. Since we don’t know exactly what happened on Earth, how many of the characters came to be here, or what is on the rest of the planet, we are right there by Remmy’s side, never sure of what will happen next watching everything with a careful eye. Prince continues to prove that her unbelievable breakout performance in “The Florida Project” was no fluke, imbuing Remmy with the same precociousness she brought to Moonee but adding layers of fear and a slowly hardening skin that mark her as a far more mature, intuitive actress than anyone would have guessed after her debut. When she cedes the role to Nell Tiger Free in the film’s last third, the transition is seamless – Free is a believable older version of Prince and takes everything the younger actress brought to the character and runs with it. The whole cast seems invigorated by the piece’s intimacy, doing increasingly attractive character work as the film goes on and relationships become more complicated. Miller makes a considerable impact with relatively short screentime, Boutella mixes fierce mama bear energy with long-gestating melancholy to surprising effect, and Cordova gives a fascinating performance of a man reckoning with all kinds of mixed emotions and competing desires. You can’t take your eyes off of him.

Unfortunately, the film’s intriguing set-up ends up being all it has. Rockefeller’s direction maintains a steady hand throughout, which keeps the anything-can-happen factor high, but the film ends right where the last act should begin. In a more dynamically directed film, the final scene could lead to fist-pumps and cheers, but here it just feels like the next step in a journey that has quite a few more to go. Ending on a note that leaves the audience wanting more is a good thing, to be sure, but ending on a note that leaves the audience feeling unfulfilled is not, and despite its strong craft, “Settlers” is firmly in the latter camp.