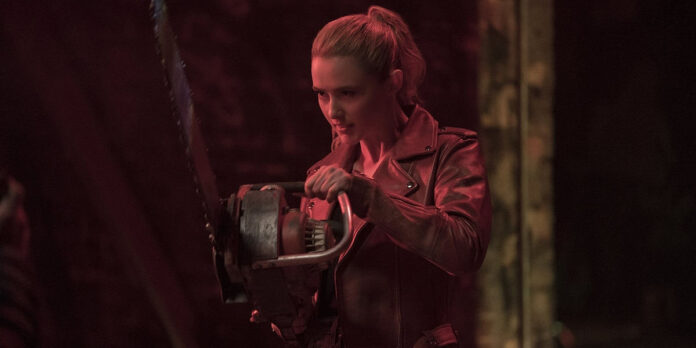 ​In the early 2010s, slasher films seemed to have disappeared from the horror genre. As audiences became obsessed with ghosts and demons, killers donned with masks and butcher knives didn’t seem to do it for audiences anymore. Thankfully, as the decade came to a close, the slasher genre seemed to be reborn. Reboots or continuations of old slashers came to fruition, but most importantly there were some highly original films added to the mix. From “Hush” to “The Final Girls” it seems like the horror genre is ready to embrace these films again, and the newest addition “Freaky” is a perfect display of what makes slashers great.

Millie Kessler’s (Kathryn Newton) life isn’t quite eventful. She dreams of leaving the town of Blissfield for college and tries to navigate growing up with an alcoholic mother and a recently deceased father. On top of all that, she’s relentlessly bullied by students (and teachers alike) at her high school. One night after a football match, Millie falls victim to the Blissfield Butcher (Vince Vaughn) – a knife-wielding serial killer known for murdering high school students. But when he stabs her with a mystical dagger, Millie doesn’t die but rather swaps bodies with the Butcher.

Over the next few hours, Millie and the Butcher grapple with the disadvantages of being in their new body: Millie wakes up to find her new face plastered on the news while the Butcher wakes up being coddled by Millie’s overprotective family. But, the Butcher soon realizes that now – due to occupying the body of a teenage girl – he can now get away with almost anything. With the help of her friends, Millie must try and stop the Butcher before midnight as he begins to massacre her classmates, or they’ll be stuck in each other’s bodies forever.

The film’s premise is thrilling and director Christopher Landon showcases (yet again) what a master he is at balancing horror and comedy. While a few characters seem more like caricatures, the film never fails to deliver a laugh, from absurd kills to dialogue alike. Kathryn Newton and Vince Vaughn (who delivers the best comedic performance of the year) are also fantastic, each of them portrays the two characters with a sense of self-awareness and wit. The two perfectly embody two characters willing to do anything to reach their goal, whether it be murdering a bunch of teenagers, or finding a missing magical artifact.

“Freaky” exudes a freshness that horror – and cinema in general – has been missing. From start to finish it’s a thrilling ride filled with creative kills and fun performances not just from Newton and Vaughn, but the ensemble cast as well. Christopher Landon proves himself as a masterful horror-comedy director, who’s career and craft continues to flourish. The film would be a perfect Friday night viewing in a packed theater and although that’s not possible in the world’s current situation, “Freaky” is destined to become a hit.