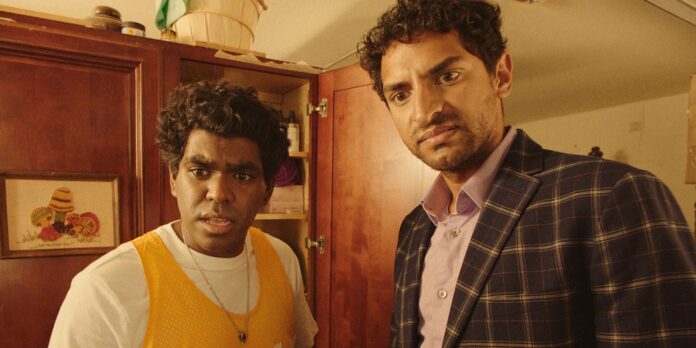 THE STORY – When a wanna-be rapper learns his ex-girlfriend is engaged to his rival, he teams up with three other misfits to steal her wedding diamonds and win her back.

Charm can go a long way. In the case of “Four Samosas,” the endearing qualities of both the characters and the steady-handed filmmaking makes up for the slight nature of the less-than-90-minute film. Much like the delicious appetizer it’s named after, the movie is a satisfying but lightweight cinematic treat that, perhaps appropriately, never tries to be more substantial than it is.

Vinny (Venk Potula) is an aspiring rapper who’s low on aspiration. After learning that his ex-girlfriend Rina (Summer Bishil) has become engaged, he comes up with a harebrained plot to steal a collection of diamonds from her father (Tony Mirrcandani). He assembles a crew of amateur criminals and sets out to make his fortune. While this may sound like a cliché story, the manner in which it’s told is what defines “Four Samosas.”

After 2015’s “Miss India America,” this is only the second feature film from director Ravi Kapoor, and he already shows total confidence behind the camera. With “Four Samosas,” the form is more important than the material. Its small-scale story is told with breezy energy, supported by impressively deployed cinematic techniques. In fact, the playfulness with which Kapoor employs color grading, aspect ratio changes, and alterations of camera speed (including a hilarious slow-motion gag) calls to mind the work of Wes Anderson. It’s hard not to think of Anderson’s debut feature, “Bottle Rocket,” while watching the characters of “Four Samosas” carry out their similarly poorly planned heist.

While Kapoor’s direction is sturdy, his screenplay is a bit more hit-and-miss. The uniformity of his ensemble’s voice is one aspect of his writing that’s unquestionably strong. His entire cast of characters is written distinctly cleverly, establishing Kapoor as an admirably self-assured author. This also helps attach the audience to all the fictional inhabitants of the world of “Four Samosas.” Even the supposed antagonists are a good time to be around. However, the silly tone can sometimes undercut the film, even with its low-stakes nature. The jokes are constant, and not all of them land.

“Four Samosas” is bursting with energy and captivating filmmaking tricks, giving filmgoers enough reason to check it out despite the decidedly light foundation upon which it’s built. It’s an enjoyable story told well using the more clever, exciting elements of the cinematic form.