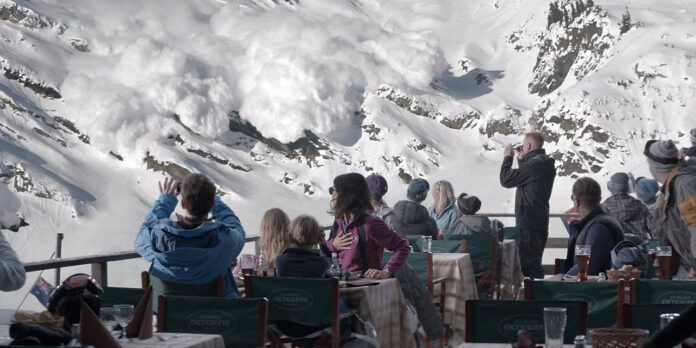 THE STORY – A man’s selfish reaction to the danger posed by an avalanche causes cracks in his marriage and relationships with his children.

​​​Ruben Östlund’s family drama “Force Majeure” gives us a perfect glimpse into people we think we know and who they truly are when faced with a dire situation. His use of wide, commanding shots gives us an imposing and unsettling feeling. It’s as if the things in front of us are not as important as that which is around us and how the setting of an argument is just as important as the argument itself. The razor-sharp dialogue, written by Östlund, is not only well crafted but painfully realistic in its uncomfortableness. The back and forth jabs between characters feels like something you would hear in a real-life argument. “Force Majeure” is a different kind of family drama, utilizing a striking score, and a simple but stylistic visual palette to drive home its major themes. In other words, it’s a force of nature.

While on a vacation in the French Alps, a Swedish family is enjoying a meal on the roof of their ski resort/hotel. While eating they all hear the ear-shattering sound of dynamite exploding on the mountain in front of them. Tomas (Johannes Kuhnke) gets rather excited to film the supposed controlled avalanche with his smart phone. As the snow gets closer and closer his wife Ebba (Lisa Loven Kongsli), realizes that the avalanche does not appear to be controlled. As the disaster barrels closer and closer towards the family, they and the rest of the patrons at the restaurant begin to panic. In a flash they all begin running away from their tables, including Tomas who runs straight away from his family with no attempt to help or save them. Especially his son, Harry (Vincent Wettergren), who Tomas was seated right next to. Over the remainder of the trip, tensions between the family boil and we see an argument start at the surface until it is spilling everywhere.

Something that makes “Force Majeure” different than most family-related dramas is how rarely we are actually interacting with the characters as an audience. A vast majority of the shots are behind the characters and some shots don’t even have them in the frame at all. Another thing is how imposing all of the backgrounds feel in these shots. Every time there is a scene out on the slopes, you can practically see the entire range of the mountains. The gigantic scale of the environment gives an off-putting feeling that you don’t necessarily feel or consider in this type of genre. it sends a message that in this world, we are like ants. These small arguments and disagreements we have with each other don’t matter on this massive planet. But even though those things look small in comparison to what is around us, these issues indeed match that level of scale on a personal level.

While the themes are prevalent, they cannot be conveyed well with actors who don’t fit into their roles. A massive compliment I can give to Östlund, Kuhnke, and Kongsli is how natural the performances feel. This doesn’t mean the performances are bland. They’re all rather outstanding, because the actors feel like real people. It doesn’t feel like they’re putting on a façade for the script or the camera. It feels like we are watching a couple interact with each other from a god-like point of view. The two lead actors flawlessly weave their way in and out of the dialogue as they bring their small nuances to each line, with the slightest shifts in facial expressions and vocal inflections. These types of performances are just another wonderful piece that make “Force Majeure” better than the average family drama.

The only real downside of the film is that from time to time the pacing feels a little off. There is a clear and steady rhythm to the scenes but sometimes that fluidity seems to be abandoned. There are times where the switch feels justified based on which scenes are next to each other but then there are scenes that just have no real momentum to them or they have too much momentum. This is a small gripe and it does not happen often but it does rear its head every now and again to make it noticeable. Other than that, “Force Majeure” is practically perfect from start to finish.

Ruben Östlund’s fourth feature film is a contemporary piece of art from a true master of the craft. The small care to detail, specifically within the dialogue and performances, is something that is always noticed and appreciated. A lot of people consider pure cinema to be silent cinema but I would say pure cinema is just any piece of filmmaking that can strike an emotional chord with its audience. “Force Majeure” is a power chord of emotions. It’s a film that sucks you into the environment and lets you breathe the same air as the characters. An excellent effort from an excellent filmmaker.