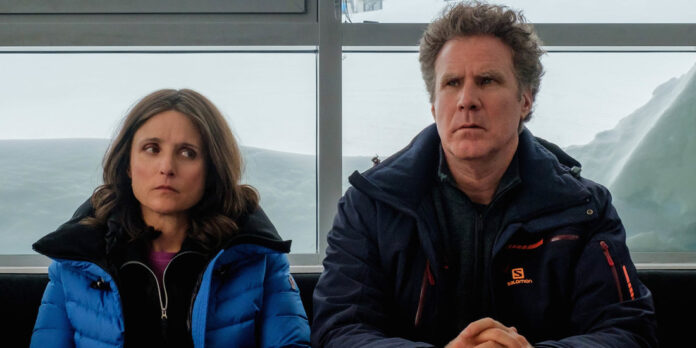 THE STORY – A woman starts to have second doubts about her husband after he runs away from an approaching avalanche, leaving her and their two sons behind.

THE CAST – Julia Louis-Dreyfus & Will Ferrell

​​Watching “Downhill” the day after “Parasite” won Best Picture at the Academy Awards is an interesting experience. Bong Joon-ho brought his non-English language film all the way to the top honors in Hollywood, all the while bringing a message that subtitles don’t need to stop us from great art. “Downhill,” on the other hand, is an English language remake of the critically acclaimed Swedish drama, “Force Majeure,” and yet it’s inferior in almost every way. This strange dichotomy was stuck in my head as I kept wanting “Downhill” to get better or go in an unexpected direction. Instead, the film plays it safe and broad, a stark contrast to the original’s subtle, dark humor. That’s not to say “Downhill” is a bad film, but it’s not really good either.

Will Ferrell and Julia Louis-Dreyfus star as Pete and Billie Staunton, a couple on vacation in the Alps with their two kids. The vacation begins as some necessary time away, giving Pete and Billie time to connect and relax. Their kids are having a fine time as well, despite the Stauntons inadvertently booking themselves into the “Ibiza of the Alps,” a resort without any other kids. Still, the family is enjoying their time together, until something happens that exposes the cracks in their relationship.

While sitting down to order lunch at an outdoor cafe overlooking the mountains, an avalanche begins to roll down in the distance. The Stauntons, along with the other patrons, watch curiously as the snow gets closer. Soon their curiosity turns to panic as it looks like the avalanche will hit them, and some people start to scream and run. Billie grabs her children and ducks for cover, while Pete grabs his phone and runs. As it turns out, the avalanche didn’t hit them, just a cloud of snow. After the dust settles and everyone realizes they’re okay, Pete returns to the table, ordering soup as if nothing had happened.

In “Force Majeure,” this inciting incident is darkly funny, yes, but there’s no mistaking what it has done to the father’s relationships. In “Downhill,” the scene doesn’t carry the same impact. Though shot very similarly, it feels as though it’s supposed to be a one-off joke, something the family will roll their eyes at. To an audience who has seen the original, I’m not sure it would be clear that this is a life-altering moment for the family.

Part of the problem, unfortunately, lies with Ferrell, whose performance never captures the deep subtleties that sell the internal struggle he’s having. It’s tough to see the layers being pulled back to confront his relationships. Louis-Dreyfus, on the other hand, gives a lovely and layered performance, often elevating the scenes around her. When she finally confronts Pete for running away, in an intentionally uncomfortable moment, she’s brilliant at walking the line between fear, pain, and anger. We can feel the emotion boiling under the surface for Billie, but we don’t feel too much with Pete.

In the end, the film never lands on a tone that works. This story lives and dives on the subtleties between a husband and a wife. It should force you to have the tough conversation of “What would you do?” “Force Majeure” manages to land on that pitch-perfect blend of dark humor and relational honesty, and unfortunately, “Downhill” never gets there. Instead, it’s a very average comedy without many laughs. It could’ve been worse, but it should’ve been better.