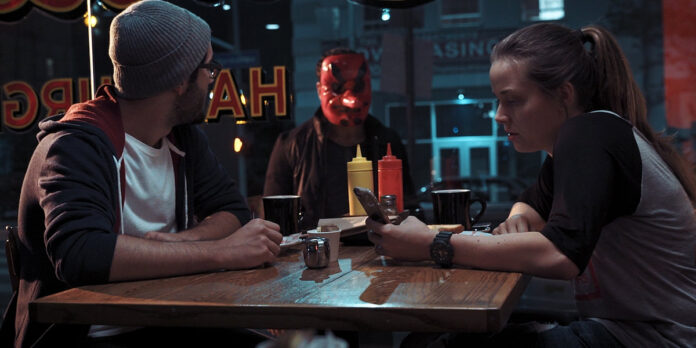 THE STORY – An up-and-coming ghost hunting vlogger hopes to increase his subscriber count by filming at a haunted hotel. Things quickly get spooky as he and his crew come face-to-face with some supernatural guests who never checked out.
​
THE CAST – Matthew Solomon, John Savage, Tim Drier, Sam Valentine, Caitlin Grace & Kelsey Griswold

We are now well beyond the 20th anniversary of “The Blair Witch Project,” which wasn’t necessarily the first found-footage horror film, but certainly showed the widest mainstream audience up to that point in time the capabilities of this micro-budget technique. By now, it seems like the world of found footage has nothing further to say, but the new horror film “Followed” hopes to mine this technique even further by exploring the world of the Internet. This may not be untrodden ground (see: “Unfriended”), but “Followed” specifically delves into the niche area of ghost hunting vloggers. As is unfortunately typical of a lot of horror, the dialogue and general polish of the film may be somewhat lacking, but something about the fun and spooky atmosphere of “Followed” unexpectedly works.

“Followed” takes place entirely on a computer desktop, where we see various videos uploaded by horror-adventurer vlogger Mike (Matthew Solomon), who goes by the unrelated-to-his-area username “Drop the Mike.” He has a burgeoning following on a video website that is definitely not YouTube, but he is in desperate need of sponsorships in order to turn his hobby into a viable source of income. Despite not being permitted by its owners; he decides to film an overnight stay at the Hotel Lennox, the infamous resort that was the home of many suspicious deaths and murderous tenants. Mike and his crew hole up in the hotel and, despite their initial skepticism, begin to become the targets of some otherworldly guests who never checked out.

The specific world that “Followed” explores is one that many know well: video blogs. The film does an admirable job of creating a realistic fictional video world from which our main character operates. The fake website’s interface, ads, and general style are all believable, which is something many films that portray the Internet do not accomplish. Plus, the videos that we see are filmed, edited and sound designed with startling accuracy. What helps sell the illusion the most is Solomon’s performance as the hustling content creator Mike. He is so specifically obnoxious in a way that many online video stars are that I found myself becoming increasingly annoyed with his antics and general personality. And as anyone who has dipped into the world of vloggers knows, this means that Solomon portrays his character with uncanny accuracy.

While the film establishes the world it is aping well, the film’s screenplay is undoubtedly questionable. The script is filled with plenty of odd circumstances and dialogue that is so strange that it sometimes seems intentionally funny (my favorite line is “What kind of kid carries an eyeball around?”). Plus, the film uses some unimpressive special effects and a frantic camera that, at times, makes it impossible to discern what exactly we’re supposed to be seeing.

Unlike most other genres, when it comes to horror movies, the actual quality of the filmmaking is sometimes less important than the answer to the simple question: is it scary? And when it comes to “Followed,” the answer is a soft and slightly unenthusiastic “Yes.” There are plenty of tension-filled moments that genuinely had me nervous to see what was coming next. Unfortunately, the actual reveal of these scares is oftentimes a letdown, but gripping the audience with the fear of the unknown is a shockingly uncommon skill in horror.

Sometimes, all I need to have a good time with a low budget horror movie is an enjoyable, spooky vibe and three to four decent scares. If that sounds appealing, and you don’t mind some uneven filmmaking, “Followed” is a harmless and fun time.