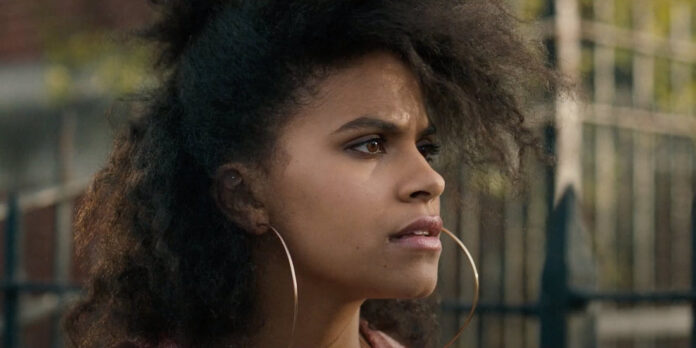 THE STORY – When twelve-year-old African-American Monique Watson goes missing in Brooklyn, the police are apathetic and her father Michael is distraught. Out of options, Michael teams up with Christian Baker, the journalist assigned to Monique’s story. With public interest waning and time running out, Michael and Christian race to uncover the truth – and find Monique, before it’s too late.

​​​There are often times when it feels like a film speaks to a specific moment in the current era with a profound resonance. It may not always be planned, but events have led to a particular story having a deep message regarding struggles and conflicts that are occurring today. However, there are many occasions when the opposite comes to pass. There are occasions when films are released during a time in history when the culture has rapidly changed around its subject matter so much that it instantly feels obsolete and dated. Today’s current events definitely make much of the new film “Still Here” come across as outmoded, but it is also weighed down by a bland story that is poorly executed.

The setting is New York City and Michael Watson (Maurice McRae) is distraught after his 12-year-old daughter disappeared without a trace. Confident that the police will not properly investigate a missing Black girl from a poor neighborhood, Watson takes it upon himself to put up flyers of his child and canvass the area in the hopes that he can find information that leads to her. This story eventually finds the interest of a journalist (Johnny Whitworth) whose ambitions are not only to shine a light on the possible miscarriage of justice but to genuinely help this desperate family find their child before it’s too late.

There have been several stories before this one that has looked into the disparity between the justice that Black communities demand from the police force and what is actually delivered. It is a conversation happening within the culture as we speak. Unfortunately, director Vlad Feier does not meet this moment properly. The amateurish filmmaking doesn’t lift up the film in any way and mostly marks it with choppy editing and a laborious pace. These issues feel compounded by the split narrative between the police and journalistic investigations that seem only slightly tethered to each other and every transition between the two is blunt and unsophisticated.

However, the script by Feier and Peter Gutter is a messy collage of pedestrian tropes and outdated commentary. For as much as this tale wants to highlight the plight of this distressed family, much of the focus is cast upon the uncharismatic white journalist and the brazen police detectives. While there are hints at the problematic nature of a white savior narrative, it never fully critiques this perspective and mostly seems to compliment it. The depiction of police as hardened do-gooders who try their best to serve the community is often inconsistent and never has the frank discussion of corruption within these departments. It’s a viewpoint that feels sloppy and tone-deaf, not to mention just downright badly written.

Most of the performances here are not anything extraordinary either. Whitworth doesn’t have the charm or charisma to make this character compelling and his banal screen presence makes one completely disinterested in his storyline and portrayal. Jeremy Holm and Danny Johnson play a pair of detectives on the case but considering their storyline has little nuance or complexity to it, the same goes for their performances. There is even an all too brief appearance from Zazie Beets that amounts to little more than a severely underdeveloped cameo and a complete waste of her talents. The only one who makes an impact is McRae in a turn that actually finds some emotional resonance and is effectively played. It makes one wish he had been centered more throughout the story itself.

Much of “Still Here” wants to tell an earnest story about how certain communities have to fight harder to see justice delivered. The film attempts to wrap all of that within the framework of an engaging mystery. Unfortunately, so much is devoid of anything intriguing and comes across as ill-suited for the era in which it has come out. There is no commentary about police brutality or the media’s lack of interest in black suffering that feels noteworthy, which makes the whole exercise an empty gesture of poor storytelling that never becomes engaging. A sprinkling of decent performances here and there can’t help the bigger failings on display. This may have been tolerable at some other point, but with a diverse landscape of interesting stories being told in similar landscapes, this one does not distinguish itself enough to feel warranted.