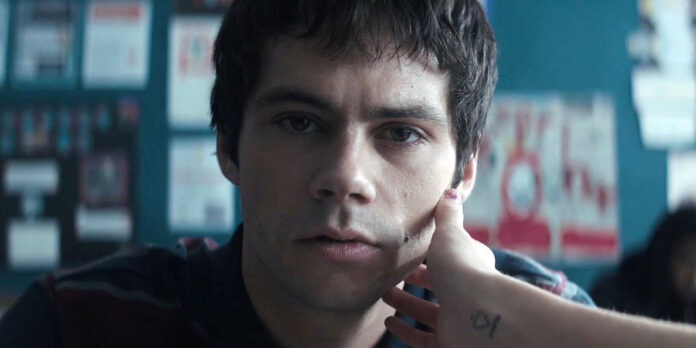 THE STORY – After a chance encounter with a man forgotten from his youth, Fred literally and metaphorically journeys into his past.

What makes science-fiction a particularly fascinating genre to explore is the incredible range it can convey. Not every entry needs to be a bombastic display of space-age settings or advanced technologies. Some of the best entries often utilize a premise that is tethered to the everyday world but given just enough of a unique spin that enhances the perspective. This usually reveals a rich environment that can examine both the inventive world-building as well as deep thematic content. All of this is what the film “Flashback” aims to achieve, and it does indeed have some intriguing concepts trapped within a messy execution.

Dylan O’Brien stars as Fred, a mild-mannered young man living a complacent life. However, the mundanity of his existence is interrupted when he starts having strange visions that harken back to his high school days. Most of these revolve around Cindy’s disappearance (Maika Monroe) and burnout drug dealer Sebastian (Emory Cohen). These images motivate him to reconnect with Sebastian in an effort to figure out what actually happened to Cindy. This starts in motion a series of events that plunges him further into unraveling the decades-spanning mystery. It also leads to a revelation that will introduce his mind to a fantastical journey that merges time and space, exposing the dark secrets of his own making.

There is quite a distinct artistic sensibility conveyed throughout much of this film, and praise for director Christopher MacBride is deserved. There’s an unsettling and unnerving atmosphere that’s crafted which creates an effective tone at putting one on edge. The appropriately chaotic editing helps to highlight the fractured narrative, and it is one of many strong aesthetic showcases that MacBride employs. While the imagery can sometimes feel generic, it is often creative and striking. At times, there is an issue with the pacing, which can often feel inconsistent in terms of the momentum, but the filmmaking is quite compelling.

However, MacBride’s screenplay is where the film’s most prominent issues lie. No doubt there are some very engaging concepts the film indulges in exploration, and the usage of time as a means to transport these characters through different moments of their lives concurrently is intensely captivating. At the same time, those concepts, and the style and tone for that matter, are clearly given high priority to the actual characters. Most of them are thinly drawn with basic motivations that don’t fill out an utterly alluring portrait. The intentionally messy nature of the plot frustrates as much as it intrigues. This all builds to an emotional climax with some interesting ideas but lands with a lessened force given the disjointed storytelling. The script almost makes this jumble of concepts come together, but it doesn’t quite stick the landing.

O’Brien does possess a natural ability to lead any project, regardless of the quality of the work itself, and he indeed manages to carry the film quite well. He genuinely sells the many states of mania his character hurls through as the story progresses, and his performance is a solid anchor amongst the chaos. It’s not meant to be heralded as a career-best, but it’s dependable work that fully inhabits this broken man. He is, however, the best in show by far amongst this ensemble. Cohen can be a charming actor but lacks a charisma here that is believable for the character but uninspiring to watch. Monroe, along with the rest of the women, is saddled with weak dialogue and a thinly sketched role that makes one appreciate her effort but leaves little impact. The performances are not the selling point of the film, and apart from the lead, it, unfortunately, shows with most of the fault being the writing.

There is a great deal to admire and respect about “Flashback,” that’s for sure. The filmmaking captures vivid imagery that enhances many of its appealing concepts, and one is almost always engaged with what it chooses to explore. Still, there’s much to be desired in how it executes such exploration, and with shallow characters and a frustratingly untidy narrative, it’s challenging to be fully taken in with it. With most of the performances, save for the lead, being serviceable at best, the final results are a film that never quite coalesces its successful traits into one thoroughly enjoyable experience. It’s often the nature of science-fiction for the journey to be more valuable than the destination. That seems to be the case here as well, even though much of what is seen on that journey is worthy of being captured.

Powered by JustWatch
Share
Facebook
Twitter
Copy URL
Previous article
Trailer – “Reminiscence”
Next article
The Next Best Picture Podcast – “The Conjuring: The Devil Made Me Do It”