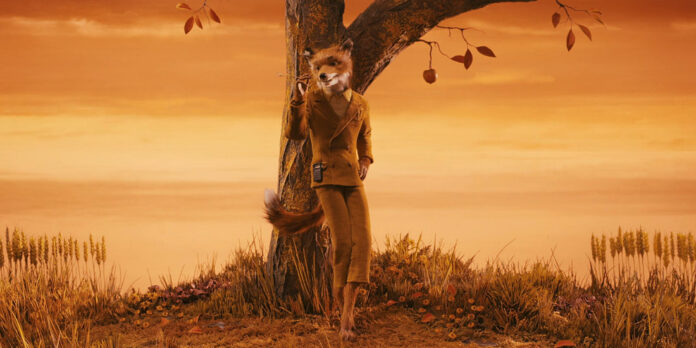 THE STORY – After 12 years of bucolic bliss, Mr. Fox (George Clooney) breaks a promise to his wife (Meryl Streep) and raids the farms of their human neighbors, Boggis, Bunce and Bean. Giving in to his animal instincts endangers not only his marriage but also the lives of his family and their animal friends. When the farmers force Mr. Fox and company deep underground, he has to resort to his natural craftiness to rise above the opposition.

​​Wes Anderson’s “Fantastic Mr. Fox” is a film that could easily be described as cinematic bliss. His precise elegant approach to filmmaking was put on marvelous display with this stop-motion animation project. From the transcending visual style to the truthful and immersive voice-over performances, there are a number of things to revel in while watching this film. Although the film does not take quite the plunge into character development that some of his other projects tend to do, there is still plenty to admire and enjoy. Offering up the perfect concoction of humor and drama, the film is brilliantly paced. Wes Anderson does not rush his jokes or emotional moments but he also does not overstay his welcome in terms of the film’s runtime. “Fantastic Mr. Fox” may very well be the most well crafted Wes Anderson film simply because of how well his distinguished style lends itself towards the stop-motion animation format. The sheer amount of effort on display in each and every frame is downright cussin’ impressive.

Based on the book of the same name by Roald Dahl “Fantastic Mr. Fox” revolves around Mr. Fox (George Clooney), who was once the greatest chicken thief in the entire world. But after getting caught during one of his heists Mrs. Fox (Meryl Streep) asks him to give up the criminal life. Two years, or twelve fox years, pass and now Mr. Fox lives a normal average fox life. Fed up with his boring life Mr. Fox decides to secretly pull off one more heist, the greatest heist in the entire world. Strategically moving his family into a tree that is set right in the center of the worlds three largest farms, Mr. Fox begins developing his master plan. But these aren’t just any old farms, these farms are run by the three nastiest, meanest farmers that are Boggis (Robin Hurlstone), Bunce (Hugo Guinness), and Beans (Michael Gambon). Despite returning to the thievery game, Mr. Fox’s return to heists causes these farmers to retaliate, putting his family and the entire community in danger.

The first and most noticeable element about “Fantastic Mr. Fox” is how seamlessly Anderson’s style is translated towards animation. Anderson’s visual approach is instantly recognizable and is turned up to 11 with this film due to the endless possibilities the format grants him. The first thing you notice is his use of color. Just about every color in the film fits within the autumn setting the world takes place in. Oranges, browns, reds, and yellows, are all glorious to gaze upon. Each color compliments one another giving the film an overall welcoming and comfortable kind of feeling. While there are moments of distress and anger, these moments are comfortable to drift among due to the color scheme. The threat that Mr. Fox and his friends face never feels truly horrifying and that is largely in part due to the colors.

Not only does Anderson’s color scheme translate but so does his exaggerated camera moves. His extremely long dollies, the drastic track ins, and outs, the whip pans, the zooms, everything that makes Wes Anderson Wes Anderson is immaculately utilized within this film. But what is easily just as impressive is the production design. Each piece of furniture in Mr. Fox’s home, each meticulously crafted and placed item within the three farms is absolutely marvelous and highly detailed. Just sitting back thinking about the amount of detail and precise care that went into each frame of this film is mind-blowing. You can see and feel the sheer amount of passion and elegance that went into creating this film, thus making it all the more enjoyable.

Although the visual style is stunning it is not the only technical aspect worth mentioning. Alexandre Desplat’s score is playful and soothing. Not only does he utilize some heavy bass and low tuned strings for the moments of action, Desplat also has a perfect contrast for the dramatic and comedic moments utilizing choir elements as well. Each comedic moment plays out with a lovely melody throughout and each dramatic moment receives a healthy middle of the two styles. Mixing drums and strings for the dramatic moments versus using strictly strings for the comedy and strictly keys and drums for the action, Alexandre Desplat crafts some incredible musical cues and entire tracks that give the film a whole new aspect of life.

Although the technical execution of this film is practically flawless and the admiration does not fade as quickly as you would expect, there are still some elements missing from this film which reveal themselves more upon a rewatch. While Mr. Fox does deal with some moral dilemmas, these dilemmas feel a bit hollow. The characters interact and share both comedic and dramatic moments, however, the story is rather predictable and there is not much to dissect in terms of the overall story. Everything we are given is meant to be taken at face value and nothing more. This does not hinder the project on a major level, nor does it lower the enjoyment you experience while watching Wes Anderson’s adaptation. However, there are still some small pieces missing, which causes a slight discord. For example, there are clear-cut villains and heroes within the story. We understand who to root for and who to root against, but when there are victories and defeats on both sides, there is little emotion involved. So when Mr. Fox defeats a rival of his who simply goes by the name “Rat” (Willem Dafoe), there is no feeling of victory. The moment is meant to be seen as a triumph for Mr. Fox and the entire team, but the scene just kind of comes and goes.

“Fantastic Mr. Fox” is another marvelous film and an instant classic from the prolific and highly respected director/writer Wes Anderson. With his instantly recognizable visual style put on miraculous display, “Fantastic Mr. Fox” feels just as alive as Anderson’s live-action works if not more. Alexandre Desplat’s music is a perfect fit for Anderson’s style and tone that it feels completely irreplaceable. Although the film is a bit simplistic in terms of the story itself and the emotional moments land on more of the hollow side, “Fantastic Mr. Fox” is still quite a marvel of a film. Wes Anderson clearly has a vice grip on stop-motion animation filmmaking and we cannot wait to see how he continues to push the medium and his storytelling in “Isle of Dogs.”