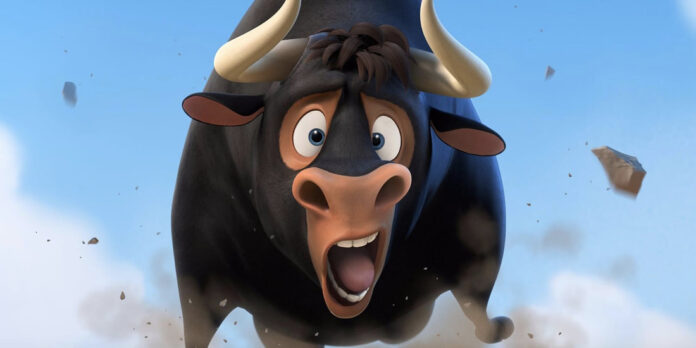 THE STORY – Ferdinand is a young bull who escapes from a training camp in rural Spain after his father never returns from a showdown with a matador. Adopted by a girl who lives on a farm, Ferdinand’s peaceful existence comes crashing down when the authorities return him to his former captors. With help from a wisecracking goat and three hedgehogs, the giant but gentle bovine must find a way to break free before he squares off against El Primero, the famous bullfighter who never loses.
​
THE CAST – John Cena, Kate McKinnon, Anthony Anderson, Bobby Cannavale, Peyton Manning, Gina Rodriguez, Miguel Ángel Silvestre & David Tennant

​It seems as though 2017 has been a year of fighting. Divisiveness continually fills our news cycle, and it seems to gets worse every day. This year seems perfectly primed for the classic story of a bull who refuses to fight. Well, the message may be needed, but in “Ferdinand,” the mediocre execution suppresses any power those ideas may have had.

In this adaptation of the classic children’s book “The Story of Ferdinand,” we meet the title character as a young calf. Ferdinand doesn’t like to fight or butt heads like the other calves do. He’s much more interested in taking care of flowers. Even when other bulls mock him or try to provoke him, Ferdinand stands his ground and remains peaceful, not seeing any point in violence or conflict. Before long, his father is taken for a bullfight and never returns, prompting Ferdinand to flee from the ranch. He is taken in by a sweet family where he grows into a gigantic bull. Naturally, he is eventually taken back to the ranch where he must yet again face the prospect of being forced into a bullfight.

The original story is so simple that this adaptation has a good base. Ferdinand’s stand against violence, more out of disinterest than pacifism, is still strong enough to work here. The message lands. Still, because of the simplicity of the story, the film has to add subplots and characters and goofy gags in order to fill a feature-length film. Some work, many don’t. Lupe, Kate McKinnon’s old calming goat character, is the hilarious stand out in the film. Her lines are almost always hilarious and feel like a unique addition. Most other characters are fairly paint-by-numbers for an animated film. The bright blue and purple hedgehogs were particularly annoying, as were the inexplicably German showhorses.

“Ferdinand” isn’t a terrible movie, it’s just utterly bland. The animation is colorful and bright, but unremarkable. Though set in Spain, somewhere we don’t often see in animated movies, the movie never truly takes advantage of the unique culture or landscape outside of the bullfights. The story never does anything particularly surprising either, and often resorts to dumb physical gags rather than a good character moment. One of the worst scenes in the movie is a literal dance-off, complete with dabbing horses and twerking bulls, that serves no discernable purpose to the plot. It’s highly annoying, though kids are sure to have fun dancing along.

In an odd twist of a subplot, suddenly one of the bulls is moved into a trailer to be taken somewhere, possibly to a bullfight. The truck pulls away and instead reveals that the bull is headed to a slaughterhouse. It was one of the few surprises in the film, though it may have seemed funnier than intended because of how gruesome it seemed in the midst of a bright and sweet children’s movie.

The message of individualism, standing your ground, and being true to yourself is necessary, and the movie makes a respectable attempt to get it across. Though the book was groundbreaking in its time, we’ve seen this message countless times since then, and in better movies, too. Still, thanks to the surprisingly strong voicework from John Cena and McKinnon, there are some laughs to be had. The film is inoffensive, simply never doing anything to truly surprise or excite. It resorts to the cliches of bad animation, preventing this film from going anywhere good. The dance-off, the fart jokes, the unnecessary blue and purple critters that feel like they’re in all of these types of animated movies. This just feels like more of the same. It gets its job done and nothing more. It could have been worse. Though adults will likely be bored by the simplicity and silliness, there’s plenty here for the kids.​