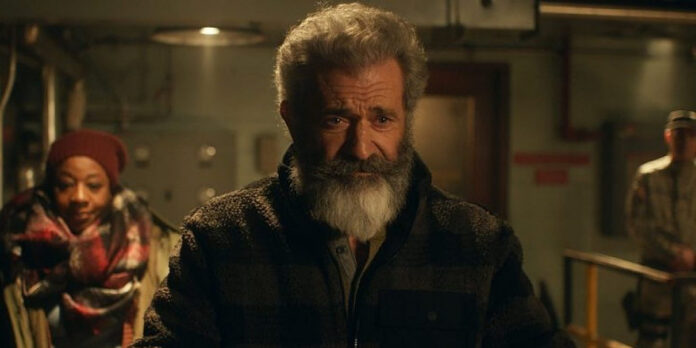 THE STORY – To save his declining business, Chris Cringle, also known as Santa Claus, is forced into a partnership with the U.S. military. Making matters worse, Chris gets locked into a deadly battle of wits against a highly skilled assassin, hired by a precocious 12-year-old, after receiving a lump of coal in his stocking.
​
THE CAST – Mel Gibson, Walton Goggins, Marianne Jean-Baptiste & Chance Hurstfield

“Fatman” stars Mel Gibson as an oddly-not-fat Santa Claus (referred to only as “Chris”) who drinks whiskey, has sex, and shoots guns and things aren’t looking so hot up in the North Pole. After receiving less money from their contract with the U.S. government than they had initially hoped for, Chris and his wife Ruth (an overqualified Marianne Jean-Baptiste) decide to enter into an ill-advised agreement with the military. Concurrently, an entitled rich kid (Chance Hurstfield) enraged after receiving coal from Chris hires a hitman with a Santa Claus obsession (Walton Goggins) to assassinate jolly old St. Nicholas.

To some of you, this probably sounds like such a cuckoo story that it simply must be seen to be believed. Unfortunately, “Fatman” is merely tiring in its insanity. It strikes a curiously grounded tone for a lot of the movie, which I’m sure was intended only to add to the ridiculousness of everything that’s on screen. But instead of giving a darkly comic contrast to the zaniness of the story it instead cements the movie as mostly, and shockingly, boring.

Its strange tone is mirrored by the bizarre sensibilities to which the movie seems to be appealing. On paper, it almost reads as a War on Christmas-esque Republican fantasy about the dangers of straying from the true meaning of the holiday. But, at the same time, it takes the decidedly not-conservative viewpoint of being critical of the military-industrial complex and bureaucracy at large. I’m genuinely not sure what to make of this contrast, except for the fact that the movie most likely doesn’t want me to think too hard about it. Still, it’s hard to do that with a movie that has Santa saying things like “Altruism is not a deductible on their bottom line.”

Jean-Baptiste and Goggins are the shining stars on top of this Charlie Brown Christmas tree. The former brings pathos to her Mrs. Claus in such a way that she acts as a port in the storm of banalities and bizarreness we get to sit through. Goggins is fully committed to his grittier-than-sandpaper hitman character. He knows fully what kind of movie he’s in and his unrighteous crusade is believable only because of his hard work.

This alleged dark comedy can’t seem to decide what kind of movie it wants to be. At times, it feels more like an overlong SNL digital short than an actual film. I think even the Grinch might skip this one.