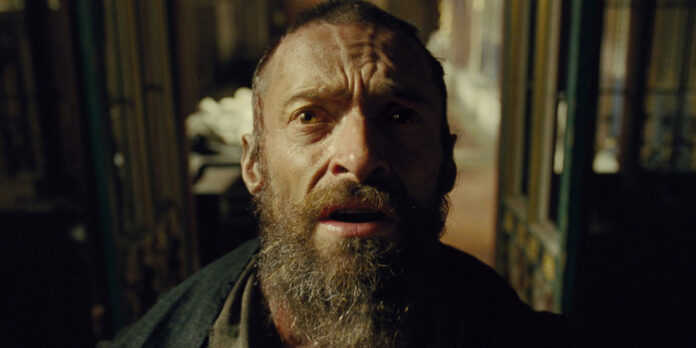 ​It is safe to say that Victor Hugo’s 1862 novel, “Les Misérables,” is a timeless classic. The same can be applied to its 1980 musical adaption, with music by Claude-Michel Schönberg and lyrics by Alain Boublil and Jean-Marc Natel. Since then, the musical has had successful long runs in London, New York, and several tours along America and Europe. Generally speaking, it is considered to be one of the greatest musicals of all time. Therefore, it was only a matter of time before Hollywood decided to have their hand in the decades-long journey of redemption, injustice, social inequality, poverty, and rebellion. And while Tom Hooper’s (“The King’s Speech”) film is a true emotional epic, much like the almost three-hour stage production, there are fundamental errors in the presentation.

“Les Misérables” follows the lives of several individuals of all walks of life throughout 19th century France. We begin our journey with Jean Valjean (Hugh Jackman), a newly freed prisoner struggling to adjust to civilian life. After an act of kindness, he decides to take on a new identity to start his life over again, even though Officer Javert (Russell Crowe) attempts to hunt him down. Simultaneously, Fantine (Anne Hathaway) struggles to provide for her young daughter, Cosette (Isabelle Allen/Amanda Seyfried). Decades later, the June Rebellion of 1832 occurs. No matter the social status of each character, their struggles are extreme, as it reflects the hardships of life at this particular point in history.

Unlike most film adaptations of esteemed musicals and operas, director Tom Hooper and producer Cameron Mackintosh decided to be as faithful to both the stage production and novel as possible. Meaning, like the stage musical, most of the film is sung-through, with only a few lines of dialogue added for the film. The music, by far, is the star of this project, and Hooper and Mackintosh are aware of that. Musically speaking, the production is pretty simple and uses singular motifs repeatedly, which works perfectly for a show that compares different characters’ conflicts and struggles for decades. A swooping seventy-piece orchestra beautifully enriches each frame and enhances each song and reprise. Only one song, “Suddenly,” is added to the film, which isn’t technically necessary but still enhances the plot to an extent and resembles the original music enough to blend in.

Hooper takes his approach of being faithful to the beloved musical too far when it comes to his direction. “Les Misérables” is famous for being entirely live-sung, a technique rarely used when making modern movie musicals for logistics and sound purposes. Usually, actors will go into a recording studio and then act to those tracks on-set during production. But Hooper wanted his characters to sound more authentic, and having the actors actually sing on set was his answer. But for this type of approach to work, the actor must be extremely comfortable with the music and song to find the space to make thought-provoking acting choices. If not, the actor falls prone to overperforming or even manipulating and changing the basic musical structure, which devalues the song altogether. When it comes to musicals, particularly pieces that are entirely sung-through, the music is the key. If the music is tampered with, the emotional reaction will diminish as a result.

This is, unfortunately, what happens in “Les Misérables.” Funnily enough, the live-singing aspect turns into a litmus test to see which actors have musical (theater) experience and which don’t. It’s evident when the film transitions from the first and second acts, switching from showcasing actors with more film credits to actors with more theater experience. Most notably, West End favorite Samantha Barks as Eponine, Broadway star Aaron Tveit as Enjolras, as well as most of the barricade boys who had performed in “Les Misérables” before filming. Therefore, the second act is far more enjoyable due to the actors’ skill sets. Here, these actors are completely in their wheelhouse and have the expertise to find the spaces in the song to establish character without manipulating the music while keeping the musical symbolism intact. For example, Barks was starring in the West End production as Eponine prior to her casting. Meaning that she had over a year’s worth of experience performing this particular part and singing these particular songs eight times a week; that experience and familiarity with the character is palpable in the film. She is able to adapt the role to be suitable for the film medium without hindering it. Barks’ rendition of “On My Own” and “A Little Fall of Rain” shows the desired effect of what the live-singing approach can achieve, but unfortunately, the majority of the cast got lost in the music.

This isn’t to say that all the performances are bad; even if they are, it isn’t entirely the actors’ fault. Sacha Baron Cohen and Helena Bonham Carter provide the much-needed comedic effect as the Thénardiers while enforcing that their characters are horrible people. Anne Hathaway, who won Best Supporting Actress, is chillingly heartbreaking as Fantine. Her performance, particularly in “I Dreamed a Dream,” is tear-jerking yet impossible to look away from. Some might say her, and Best Actor nominee Hugh Jackman’s performance is not the best vocally, and at times they overperform, but that hinders on Hooper’s inability to direct the songs. All he does is shoot a continuous take with extreme close-ups, which gives his actors, particularly those with little musical experience, no room or support. This type of direction also highlights the authenticity of actors’ performance as the most important concept of the film instead of the characters’ experiences in 19th century France which is a shame.

Despite its faults, the story of “Les Misérables” is timeliness for a reason. There is something special about Claude-Michel Schönberg’s music that makes you stand up to attention which makes the film enjoyable in spite of its imperfections. The story’s simplicity is what makes “Les Misérables” stand out, and when the film is at its simplest forms, it soars. It has a strong cast and a strong foundation, supported by great costumes that pay homage to the stage production, strong hair and make-up, and an impressive production design. If only it had a director who knew how to direct a live-sung musical.