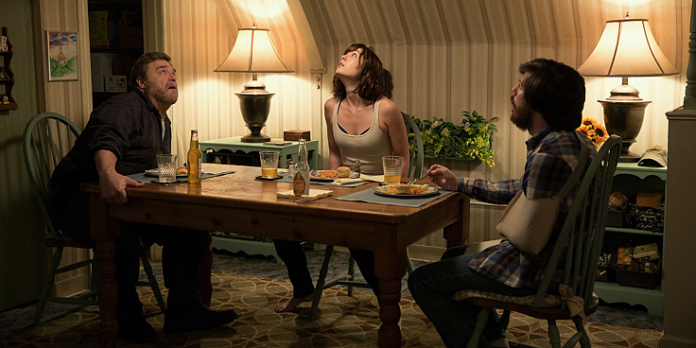 THE STORY – After surviving a car accident, Michelle (Mary Elizabeth Winstead) wakes up to find herself in an underground bunker with two men. Howard (John Goodman) tells her that a massive chemical attack has rendered the air unbreathable, and their only hope of survival is to remain inside. Despite the comforts of home, Howard’s controlling and menacing nature makes Michelle want to escape. After taking matters into her own hands, the young woman finally discovers the truth about the outside world.

Eight years after the original “Cloverfield” came out to much acclaim and unexpected box office success, comes the sequel/spinoff “10 Cloverfield Lane.” Producer J.J. Abrams may be accused of taking what was considered a spec script and possibly reworking it to fit in with his 2008 hit in an attempt to garner box office returns. Debut director Dan Trachtenberg expands on the post-alien invaded Earth and focuses on the people who still populate it. It is because of his handling of the material that those accusations don’t matter, for “10 Cloverfield Lane” is a tense well-made thriller that manages to simultaneously stand alone and lay the groundwork for future installments.
​
After running away from her marriage, Michelle (Mary Elizabeth Winstead) is scared and unsure of where she is driving to next on the road. Suddenly, she is caught in a nasty accident which renders her unconscious. Upon awakening, she finds herself in an empty room, hooked up to an IV and chained to the wall. A socially awkward and possibly dangerous man named Howard (John Goodman) approaches Michelle, only to tell her that the entire world has ended. He claims to have saved her life and is holding her and another man named Emmet (John Gallagher Jr.) in a bunker beneath the ground, which Howard has been building for years fearing of an impending attack. However, Michelle see’s holes in Howard’s story and is unsure of whether to trust him or not.

If you’re at all familiar with the first “Cloverfield” then this premise may sound slightly odd as it does not deal with any of the characters from the original, nor is it shot with the same handheld “found footage” style that was applied in the first film. If you’re not familiar with the first “Cloverfield” then you’re in luck as this “sequel” is probably the first in what will most likely be a series of films introducing us to a new set of characters and how they have been surviving on this planet after the invasion has taken place. It’s a storytelling method that is found usually in a television series when a cataclysmic event has touched the lives of many different individuals and we follow those people’s struggles over the course of a set amount of time. Due to the differences between the original film and now this one, it leaves the door wide open for what a possible third film in this franchise may manage to do with this world that J.J. Abrams has created.

What immediately sets “10 Cloverfield Lane” apart is its intimate setting and how that allows us to focus on a trio of characters instead of a global setting where we would get little character work from what would surely be a larger cast. Mary Elizabeth Winstead, John Goodman and John Gallagher Jr. all benefit from this narrative device, as it allows for them to share a range of emotions with each other resulting in a few extremely tense scenes. John Goodman, in particular, stands out as his role allows him to be menacing, comical and morally complex. It’s been awhile since we’ve seen him with this much screen time as he’s usually cast as a supporting actor. But he knocks it out of the park here playing the embodiment of the monster that audiences will come to expect from elsewhere in this story. I’m not going to spoil whether that “monster” from the original “Cloverfield” shows up or not, for it’s irrelevant in tracking the character arc of Michelle. She’s a woman who in her own words runs when things get too hard. But when she is put in a position where she can’t run (This bunker is pretty claustrophobic), she is forced to tap into that human survival instinct and it’s her resourcefulness in the face of great danger which makes her an easy character to root for.

While the ending of the film brings closure to the film’s characters, there are some moments in the final act which may put audiences in a position to suspend their disbelief a little too much. Like the first “Cloverfield,” the first half of the film is at odds with the final half despite the film’s frantic pacing and unbearable anxiety. Did we need a sequel to “Cloverfield” all these years later? Probably not. However, in a world where world building is very important for studios to create the next blockbuster franchise, I have no problem if the (sure to come) sequels to “10 Cloverfield Lane” can manage to maintain intriguingly written characters caught up in unique circumstances, and balance that with the same level of tension and psychological horror found here. If all of that can somehow happen then we are surely in for one hell of an alien invasion franchise.