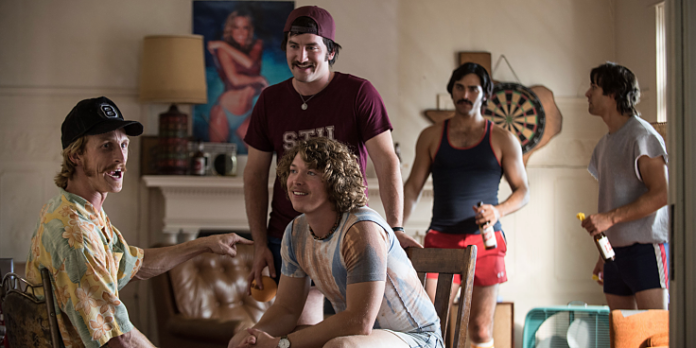 Richard Linklater is a very special director. More so than many of his colleagues, he makes films that can be considered time capsules. They fully capture what it not only means to be human, but to be alive during a specific time period. He captures this through attitudes and feeling. He struck a chord with audiences on his last film “Boyhood” by showcasing 12 years of a 6-year old’s life, culminating on that child making his way to college. And now with his newest latest film “Everybody Wants Some!!” Linklater showcases the first three days of a young freshman’s college experience set during the 1980’s. It’s a potent mixture of “Dazed and Confused” meets “Boyhood,” and the results are an awesomely good time that (much like college itself) you won’t want to end.
​
​”Everybody Wants Some!!” takes place over the course of three days before classes start at a college in Texas. The new freshman baseball pitcher named Jake (Blake Jenner) has just arrived on campus at his new house and gets acquainted with his new teammates (Played hilariously by a multi-talented male ensemble which includes Juston Street, Ryan Guzman, Tyler Hoechlin, Wyatt Russell, Glen Powell, Temple Baker, J. Quinton Johnson, Will Brittain and Austin Amelio). Along the way he is hazed, parties hard with his friends, gets caught up in competitive shenanigans and falls for a female drama major student named Beverly  (Zoey Deutch).

Much of the plot of “Everybody Wants Some!!” may be lacking in singular moments of drama which is something that many people complained about in Linklater’s last film “Boyhood.” However, Linklater is interested in capturing realistic performances from his actors who behave and act in such a way that recalls a nostalgia of the time period. It’s in these small moments where he captures humanity and poignant life lessons, which are far more impactful than a singular dramatic event. We care about these characters because they are written, acted and directed in such a way that they feel like we real people that we would like to hang out with ourselves, get a beer with and (eventually, yes) even play baseball with. Sure they may all be sex obsessed (Where do you think the title of the film comes from other than Van Halen?), obnoxious and filled with enormous amounts of masculinity. However, Linklater still manages to make them warm, loveable and introduces a series of thematic themes such as searching for one’s own identity and living in the moment.

These young men are seeking women each night they go out as much as they are trying to search for their own selves. Who you are with your friends during this exciting time in your life, may not necessarily be who you become once you’re done with college, but the experiences you encounter certainly help you in getting there. And that’s exactly what Linklater wants to communicate to the viewer: the experiences. The film acts like a “fly on the wall” at each and every single scene as we travel along with Jake through this exciting and new stage in his life. Blake Jenner might be slightly wooden as the calm but ever so cool new freshman Jake, but his supporting castmates all come alive around him with Zoey Deutch and Glen Powell being the standouts amongst an ensemble who simply look like they are having the time of their lives.

“Everybody Wants Some!!” serves as sort of a spiritual sequel to “Boyhood” and a companion piece to “Dazed And Confused” (Wait another few years and watch Linklater release a film about the 90’s next to complete this trilogy). It’s a light-hearted, rock ‘n’ rolling (The soundtrack featuring music by Van Halen, Cheap Trick, The Cars, The Knack, and more!), great time at the movies which is sure to put a smile on your face and give you yet another reason to realize what a talented treasure Richard Linklater is amongst us. It captures the highs and the lows of blissful youth, silly male competitions and what it means to truly feel alive. As the film comes to a close, you beg for more time with Jake and his pals as he sets off on what is surely going to be some of the most important times of his life. Yes, everybody truly does want some. My only complaint is that I wanted even more.