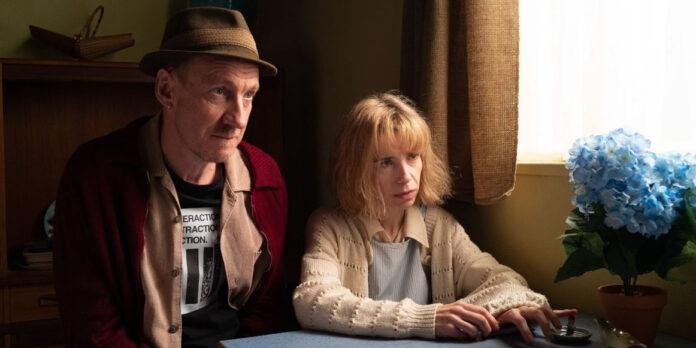 THE STORY – After Jane falls into a state of despair over her schizophrenia, she encounters new sources of love and life with surprising results.

10/2/2020
​By Nicole Ackman
​
​Depictions of schizophrenia in film often paint the person as either dangerously violent, a sort of mad genius, or a helpless victim. Even many films with less negative connotations towards the illness trivialize it or fail to show the person as being in treatment. Fortunately, Craig Roberts’s “Eternal Beauty” is a refreshingly fair portrayal of a woman with paranoid schizophrenia who is trying to cope with her illness and her less-than-perfect family. The dark comedy finds humor in many places but doesn’t make a joke out of Jane’s condition. It features a very British cast, from David Thewlis to Billie Piper to Penelope Wilton, and definitely embodies a British indie film in its style.

Sally Hawkins plays Jane, a largely detached and despondent woman dealing with the condition that has plagued her for many years. The details of her life are a bit vague, but she has issues with her mother and sisters who treat her with different levels of compassion. Hawkins’s portrayal is certainly committed and her physicality does much to create the character of Jane.

“Eternal Beauty” shows how Jane’s illness affects her daily life, from her descriptions of her delusions to the toll that it takes on those around her. It also shows their negative impact on Jane and how her relationships with family members worsen her state. She is shown in treatment, taking medication and employing coping mechanisms to varying degrees of effectiveness. The film itself does make some efforts to show us her feelings through the filmmaking like utilizing extreme close-ups and cutaways when she is feeling overwhelmed. The score by Michael Price also gives an indication of her mental state throughout the film.

Through flashbacks, we come to understand some of Jane’s problems like her rivalry with her beautiful but self-centered sister Nicola (Billie Piper) and her troubled relationship with her oddly combative mother (Penelope Wilton). We also see the early forms of treatment that scarred Jane, making a subtle commentary on the way that illnesses like schizophrenia have been treated over time. Jane’s sister Alice (Alice Lowe) provides the only sort of stability in the whole film as she tries to help her sister alongside her own family.

Partly through the film, the tone shifts when an odd and not very good musician named Mike (David Thewlis) enters the picture as Jane’s love interest. The movie doesn’t do a great job at selling their romance and the tonal shifts throughout make it feel uneven. However, the movie eventually comes to the rather uplifting conclusion that normal is boring and that Jane shouldn’t have to envy others for not having her issues.

“Eternal Beauty” is certainly the type of film that enjoys its own strangeness. It can be a bit confusing trying to sort out what’s real and what isn’t within the film, but that’s likely the point. By having the focus be not only on Jane’s condition but on the way that those around her treat her poorly, it paints an interesting depiction of mental health. It’s not a perfect film by any means and definitely not for all audiences, but there is plenty in it to appreciate, including Roberts’s good intentions. It also does leave the audience with something to ponder: “What if there’s no such thing as happiness? Only moments of not being depressed.”

Powered by JustWatch
Share
Facebook
Twitter
Copy URL
Previous articleThe Next Best Picture Podcast – “Captain Fantastic”
Next articleThe Force Is Racist With This One – “Red, White And Blue” At NYFF58