Emma On The Big Screen 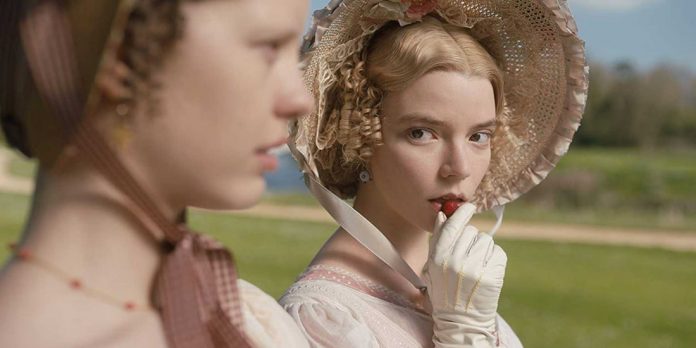 There’s something extraordinary about the work of Jane Austen. Even though her beloved novels were published 200 years ago, they still connect with audiences today. It’s not just literary audiences that relate to her work, but cinematic audiences as well. Austen’s work has been adapted to film time and time again, whether it’s Joe Wright’s iconic “Pride & Prejudice,” the witty “Bridget Jones’s Diary,” or the classic “Sense and Sensibility.” Today I’m shining the spotlight on “Emma,” Austen’s tale of a young woman who loves to play matchmaker for her peers. The story has made its way to the screen quite a few times, with a particular surge in the ‘90s. A new version of the tale is making its way to theaters this month with quite a promising cast. Let’s take a look at “Emma” on the big screen.

My favorite adaptation of “Emma” isn’t a period drama and is far removed from the 1800s. Instead, it involves sunny Beverly Hills, a dreamy Paul Rudd, and the trials and tribulations of the teenaged Cher Horowitz (Alicia Silverstone). I’d be totally buggin’ to leave out “Clueless” while talking about the iconic adaptions of “Emma.”

Amy Heckerling’s witty and wonderfully quotable coming-of-age tale, “Clueless,” brilliantly updates Jane Austen for a modern teen audience. Cher is Emma, Josh (Rudd) is Mr. Knightley, Tai (Brittany Murphy) is Harriet, Elton (Jeremy Sisto) is Mr. Elton… you get the idea. The film brings the characters to life in a trendy high school setting. Everything from the music to the sets to the style is a teenage dream. I’ll never forget discovering the film at 13 and playing it on a constant loop. There’s a good chance I could recite every word of the script without fail.

The ‘90s California setting is certainly different than what we’re used to from a Jane Austen affair, but a huge part of “Clueless’s’’ charm lies in the beloved story. There’s something so heartwarming about a girl finding real meaning in helping others and finding love along the way. After all, we could use a little tenderness. (But also, please don’t fall in love with your step-brother even if he’s as cute as Paul Rudd).

The most classically known version of “Emma” comes from director Douglas McGrath. Gwyneth Paltrow stars as Emma Woodhouse, the young meddling matchmaker. The actress was fresh off the success of “Se7en” when she starred in the film, and audiences were ready to see her in something less bleak (preferably with no boxes involved).

Many were skeptical of an American actress portraying the beloved British character; however, Paltrow is the quintessential embodiment of Austen’s character: free-spirited and naive. This is a story that lives and dies with the lead character, and, thankfully, Paltrow nailed the role.

McGrath’s “Emma” is bathed in sunlight and vibrancy. Every scene is beautifully lit, making the audience feel like they’re in an eternal springtime as we follow Emma and her journey of matchmaking, mix-ups, and course to find love.

There was no time like the mid-90s for Hollywood to show the world its undying devotion to Jane Austen. The ‘90s are a time that I officially dub the Austenaissance. One official sign of the Austenaissance in full swing happened when “Emma” got three theatrical adaptations in the span of one year.

Many don’t know about the made-for-TV Kate Beckinsale film, but it debuted on ITV to critical acclaim three months after the Gwyneth Paltrow led film. Beckinsale carries the movie with charm and class. She’s a more subdued version of the character than we’re used to seeing, like from Paltrow and Silverstone, but it’s a refreshing portrayal. Mark Strong is an underrated Mr. Knightley that you’ll certainly remember after watching.

Because this adaptation has a smaller budget, it doesn’t carry quite the same grand spectacle of “Clueless” or “Emma,” but it still has its share of style. Director Diarmuid Lawrence keeps the viewer intrigued with fast-paced character interactions and creative dream sequences plucked straight from Emma’s imagination. If you consider yourself an Austen fan, I would recommend watching “Jane Austen’s Emma.”

In just a short time, the latest addition to the JACU (Jane Austen Cinematic Universe) will be in theaters everywhere. I’ve only seen the trailer for this year’s “Emma,” but it promises gorgeous cinematography and a star-studded cast. Leading the pack in the titular role is Anya Taylor-Joy, best known for her roles in “Split” and “The Witch.” The always amusing Bill Nighy is Emma’s father, Mr. Woodhouse. Josh O’Connor of “The Crown” fame is Mr. Elton.

The film looks to have a fast-paced wit and stylish directorial choices. It will be in limited release this weekend and expand to more theaters on March 5th. (Can it be March 5th already?! I need it right now!)

What’s your favorite adaptation of “Emma?” Are you excited for the new film? let us know in the comments section below or on our Twitter account.

Share
Facebook
Twitter
Copy URL
Previous article
“TO ALL THE BOYS: P.S. I STILL LOVE YOU”
Next article
The Next Best Picture Podcast – “Serenity” Audio Commentary