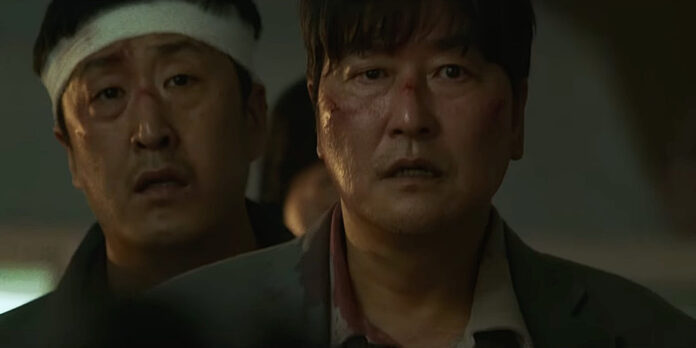 THE STORY – While investigating a terrorist threat that goes online, Korean authorities discover that a suspect has recently boarded a flight bound for the United States. When a healthy passenger on the same plane suddenly dies, panic erupts both in-flight and on the ground. With steadily decreasing fuel and international refusals to offer aid, the captain and crew take unprecedented emergency measures to save the lives of all on board.

​There is an odd fascination that can occur when one watches a film that emphasizes some disastrous event. It can be a host of intriguing topics, as one can find investment in a story of characters dealing with incredible circumstances or purely taken in by the visual spectacles. Most often, the latter is what is emphasized in such projects, but there are attempts to flesh out the world to create more substantial emotional stakes. That objective seems to be what “Emergency Declaration” is aiming to achieve, and there are elements that make it quite compelling. Unfortunately, there is an inert sense of passion on display that also makes it a rather tedious experience.

The film’s premise revolves around one fateful day when an airplane travels to Honolulu from Incheon, South Korea. Police detective In-ho (Song Kang-ho) has received information that someone is planning a terrorist attack aboard a plane and is frantic to find out who is behind this threat. The investigation leads them to a scientist, Jin-seok (Yim Si-wan), who has created a lethal virus he intends to unleash on the unsuspecting passengers. Among them are Jae-hyuk (Lee Byng-hun), an anxious father with his own troubled past, and In-ho’s wife, which raises his personal investment to end this aggression. As Transport Minister Sook-he (Jeon Do-yeon) coordinates with other government officials for assistance, the world looks on at the ensuing chaos and the determination it will take to stop it.

There is much on the surface to the film that would suggest this to be an engaging work. The setting allows for the introduction of personal connections with the individuals involved, which can lead to a tense procedural to unfold. Unfortunately, writer-director Han Jae-rim never indulges in a tone that makes the tension all that captivating, flatly presenting most of the sequences with little extravagance. This would be less of an issue if most of these characters did not feel poorly drawn with shallow motivations. That would be par for the course in regards to most disaster films, but a more serious emphasis rids this piece of a more broadly entertaining exhibition. The storytelling itself is somewhat predictable, and the stale writing only underscores how lacking the narrative is at becoming engrossing.

Still, there are occasional moments when the filmmaking actually provides some effective set pieces, particularly during scenes where the plane is in danger of crashing, and the peril is felt on a visceral level. This is when the directorial efforts feel more creative in their execution, and the perspective is focused and nicely taught. Throughout the film, there remains an intimacy that adds to the claustrophobia, an aura that obviously dissipates whenever the plot cuts away to the governmental operations on the ground. That broad scope is an impediment to having a consistent sense of anxiety, but there are occasions when the film lives up to its thrilling potential. It is a shame that these grandiose episodes are treated with more care than the emotionally stilted characterizations.

As with most disaster pictures, one doesn’t usually expect much in terms of performances. However, there is a greater frustration that a collection of such remarkable talent would be given very little material to deliver outstanding portrayals. Song manages to convey a steely persistence and frenetic zeal that is enthralling, even though the ultimate foundation is rather hollow. The same is said for Lee, inhabiting a sympathetic role that is quite endearing but also pedestrian in its arc. There isn’t much else for Jeon to do other than trading nervous stares with others in the room. Only Yim appears to break free from the mundane shackles as he offers a performance that is inherently creepy and unsettling while also being reserved in its menace. The part is relatively small, but he makes the most out of a villainous turn and provides quite an impact, while others are merely serviceable.

One can see the promise of an exciting excursion with “Emergency Declaration,” which is why the final results are wholly underwhelming. Despite some well-earned spectacle that is nicely crafted, the spirit is muted and somber. Instead of heightening the drama, this only undermines its significance and makes one feel every bit of that 140-minute runtime. The cast is full of capable performers who are given very little on the page to create poignant showcases. The film may feel fitted into a particular mold of a genre, but it’s missing a key ingredient to making it truly interesting. It has all the pieces for a riveting ordeal but lacks the focus to elevate its status to something more gripping.