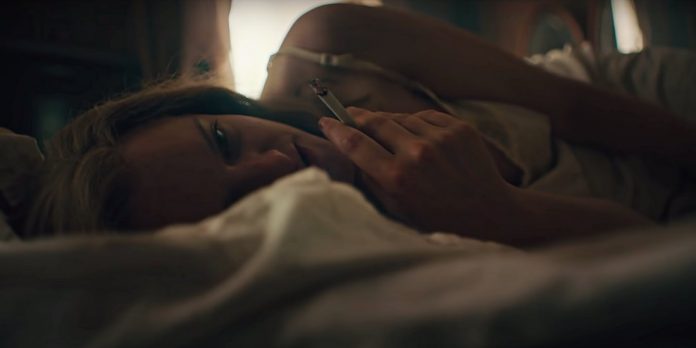 ​“Shirley” depicts famed author Shirley Jackson as a seemingly fragile, mentally sensitive woman who’s often dismissed as mad, is belittled by the men in her life, looks ready to snap even when she smiles, and who can make a furious spectacle of herself at a moment’s notice. So naturally, she’s played by an actress who’s made such characters her stock in trade for the last few years running. As such, Shirley Jackson has joined Cecilia Kass, Becky Something, June Osborne, Claire Walsh, and Dahlia in helping Elisabeth Moss become the movie and streaming world’s leading actress for playing “women going mad” since 2017. In that context, “Shirley” may seem like the same old, same old from Moss at this point, as she inches towards the kind of typecasting familiar to countless male actors who’ve played mad men for years on end. Yet the kind of ‘madness’ displayed, examined, and deconstructed by Moss over and over these days remains quite different from the string of unhinged characters a Christopher Walken, Gary Oldman or Dennis Hopper would tend to play again and again.

​The more accurate, contemporary parallel to Moss may actually be Reese Witherspoon, another award-winning actress who went from child actor to movie and TV icon through the decades. Like Moss, Witherspoon has become typecast for showing a type of suppressed rage over and over, most notably in television and streaming. However, from “Election” to “Big Little Lies” and “Little Fires Everywhere,” Witherspoon’s characters go to unsustainable extremes to hide their true rage from the world, all so the outside world – if not their worlds closer to home – can see them as perfect. In contrast, Moss’s recent array of characters have no interest in holding anything back. No matter how unstable the rest of the world believes them to be for it.

There is often genuine instability at the center of it, such as with Shirley’s agoraphobia and crippling writer’s block, “The Invisible Man’s” Cecilia emerging from years of domestic abuse, “The Handmaid’s Tale’s” June fighting against an entire abusive world, and “Her Smell’s” Becky seeming to live in another world altogether. Even Moss’s small part in “Us” included a doppelgänger who seemed particularly unhinged even for the Tethered. Unfortunately, it is far easier than it is with men to dismiss ‘unstable’ women as merely crazy, both in entertainment and reality. Perhaps in some circles, Moss already is or will be dismissed for playing the same old ‘crazy’ kind of woman lately. But to borrow from fellow “deconstructing crazy woman stereotypes” TV pioneer “Crazy Ex-Girlfriend,” the situation’s a lot more nuanced than that.

Going back further, Moss’s true pattern of roles isn’t with ‘crazy’ women, but in women struggling with trauma and with being seen. Even playing the President’s daughter didn’t make a young Moss immune in “The West Wing,” thanks to a kidnapping cliffhanger that briefly took President Bartlett out of office. And when a grown-up Moss had some authority of her own as a cop in Jane Campion’s “Top of the Lake,” it still came with an abusive backstory. Of course, in between those shows was Moss’s most famous stint on TV, in what may still be her most famous role. 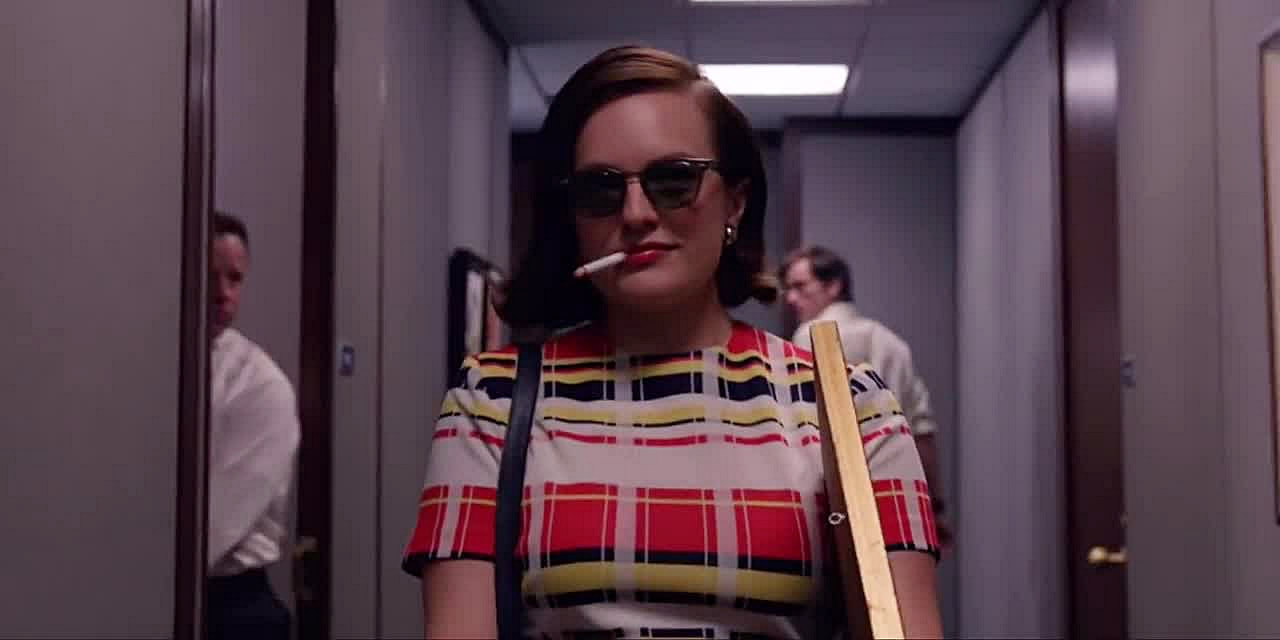 Peggy Olson may not be the exact template for Moss’s current string of characters, as she is more professional than Becky, less creatively blocked than Shirley, more comparatively fortunate with men than Cecilia and is even in a more comparatively freer culture than June. Nonetheless, everyone who watched “Mad Men” – and eventually, a few characters who were in “Mad Men” – came to realize Peggy represented the building blocks of the future, just as she did for Elisabeth Moss.

While Peggy was more demure than the likes of June, her frequent and famous tête-à-têtes with Don Draper and her iconic departure from Sterling Cooper Draper Pryce near the end of the series showed a rebel ferocity all their own. Like Shirley and “The Kitchen’s” Claire, Peggy fought to gain her place in a male-dominated industry, albeit with advertising copy and not with novels or a gun. And while “Mad Men” ended in the midst of Peggy’s rise, one can assume and hope that any subsequent fall is nowhere near the level of Becky Something’s collapse from stardom. For Peggy, the journey was somewhat less about the final destination and more about being seen on the road. To emerge out of the anonymity of the secretary’s pool, and of being a woman in the ’60s in general, in order to prove to the world and herself that she had a voice worth listening to. In that vein, that is the cornerstone of Moss’s past and present filmography more than any mental illness.

“Her Smell’s” Becky Something casts such an over the top, destructive shadow in the first three parts of the movie, it is all the more startling to see the recovering Rebecca Adamcyzk take her place in the last two parts. But after years of being buried under a deranged, toxic persona, Rebecca comes back out to regain her true voice and identity in order to cast Becky out for good, for her sake and for those who still love her.

Battling self-destructive inner demons is markedly different from battling abusive yet ‘invisible’ outer demons. Regardless, “The Invisible Man’s” Cecilia has her own struggles to regain her own identity and her own voice, even before the man who took them away finds a new way to torture her. His games make her look increasingly mad and unhinged to the outside world, and at first glance to even her remaining friends and family, that’s exactly what she looks like.

Yet the turmoil and tragedy in Cecilia’s journey, and in the journey of most Moss characters, is the desperate battle to prove to others, the world and even herself that she isn’t crazy, that her demons are real and that she deserves to be believed and listened to. Like with June, the machinations of abusive men keep her pain invisible to a world that may not believe her either way, yet like with June, Cecilia still somehow has enough buried strength left to not go quietly.

There is collateral damage along the way on both counts, as there is in “Shirley” when the author regains her inspiration through a volatile connection with a female tenant. But while her methods may be unsound and her mind legitimately scattered, Shirley still comes out of it with what would become one of her most famous novels. Fittingly enough, it is a novel where Shirley sets out to prove that even a missing girl with an invisible, largely uncelebrated life still has a story worth telling.

​Slowly but surely, parts of American and world culture are coming to believe that women dismissed as “mad” “crazy” or “unstable” are more human and in need of more understanding than certain male-dominated groups are capable of. In some small way, Moss’s filmography in the last few years has helped to reinforce that vital and much-needed point, which goes beyond mere typecasting and scenery-chewing. Still, given how such scenery-chewing has swamped Moss’s career of late, one wonders if her last several films have also been one long audition tape for a female Joker-esque movie. Frankly, that would have made 1000 times more sense for the most recent “Joker” movie and might have corrected Moss’s “Her Smell” snub this past Oscar season.

On the flip side of that, some may still find it too limiting – especially these days – to keep giving such stories to a white woman, and a real-life Scientologist at that. “The Handmaid’s Tale” launched this section of Moss’s career, but it was already getting criticized for the tactics, perspectives and storytelling decisions made to keep June alive and at the center for so long. Right now, if a Season 4 does air later in 2020, it may not go down well for a number of reasons. Such a second half of 2020 would be a polar opposite to the first half where Moss sports two of its most acclaimed performances. Yet that second half may also eventually feature Moss in Wes Anderson’s “The French Dispatch” and in Taika Waititi’s “Next Goal Wins,” which might well let her take it easy in a movie again for once.

But since she isn’t the lead in either film and she has no other upcoming movies listed, it could be a while before we see her next full showcase outside of streaming TV. Once she does get another starring role, perhaps it won’t seem so fresh to everyone by then if she goes right back to playing another woman on the edge of a mental collapse. That might already be the assumption of some who’ve seen or are about to see “Shirley” on Hulu right now. However, while this and the rest of Moss’s recent output may look like the same old story of madness on the surface, one must remember the other overarching theme uniting her ‘mad’ women – the need to look closer and understand.

Have you seen “Shirley?” If so, what did you think of Elisabeth Moss’s performance? What do you make of her career so far and the roles she has been taking on? Let us know in the comments section below or on our Twitter account.