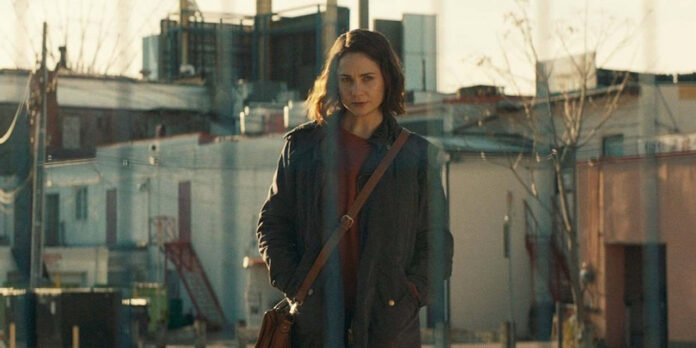 THE STORY – A troubled young woman returns to her hometown of Niagara Falls, where the memory of a long-ago kidnapping quickly ensnares her.

​​​​The microgenre of neo-noir has been experiencing something of a resurgence lately. Recent movies like “Blade Runner 2049,” “Under the Silver Lake,” and “Nightcrawler” show that there’s still some life in the twisty world of film noir, and “Disappearance at Clifton Hill” is a worthy addition to this roster. Mysterious, moody, and appropriately convoluted, the film is an atmospheric adventure with a central figure as enigmatic as the unsolved crime she is attempting to unravel.

The main character in question is Abby (Tuppence Middleton), a compulsive liar who has a history of bending the truth in order to get what she needs. She returns to her hometown on the Canadian side of Niagara Falls on the occasion of her mother’s death. Returning to her childhood home brings back a memory of when she was a little girl and witnessed a boy get kidnapped right in front of her. From within the nearly-condemned motel that her late mother owned, she begins to piece together clues as to the truth of this long-unsolved crime. Along the way, she meets colorful characters and makes startling discoveries, all while lying whenever she finds it necessary to get closer to solving the mystery.

Director Albert Shin excels at giving the film an eerie atmosphere that puts the audience on edge before we’ve even seen anything worth fearing. The entire movie looks like it takes place on a cloudy day, which puts us in the dread-filled, paranoid headspace of our main character. The film also revels in giving us updated versions of noir tropes: the score is saxophone-heavy and clearly inspired by old-fashioned jazz, our protagonist encounters many idiosyncratic characters (for example, a diver with a history podcast, a local business mogul with a suspicious past, and colorful magicians seen mostly through grainy VHS footage), and she visits memorable locations (a decrepit motel, a UFO-themed restaurant, and a haunted house attraction, among others). These calling cards of classic noir films have been remixed for a modern era, which gives us a reference point for the type of story this film is telling.

While it uses classic storytelling techniques, the film is unquestionably a product of present-day interests. Most notably, it feels like a response to the recent rise in interest for true crime. Abby is almost maniacally set on solving the central mystery, in a way that can be read as a warning to true crime devotees about overstepping boundaries in search of answers. Another character (played by legendary director David Cronenberg) happens to be the host of a history and crime podcast, reflecting one of the most successful and prolific ways that people consume true crime stories nowadays.

As the central character, Tuppence Middleton delivers an appropriately aloof performance. Her character has a history of spinning her own narrative, and Middleton keeps the audience on its toes by never letting us be sure of what she’s going to do next. Cronenberg also delivers a quirky yet grounded performance. Unfortunately, some of the supporting characters who briefly enter into the story aren’t always united in their performance style. Some of these colorful characters steer a little too hard into over-the-top territory. But it’s not entirely distracting as the overall tone of the film is sharply defined and consistent.

Fans of mysteries and crime stories will find a lot to love in “Disappearance at Clifton Hill.” It’s engaging, mysterious, and a welcomed addition to the modern neo-noir canon.