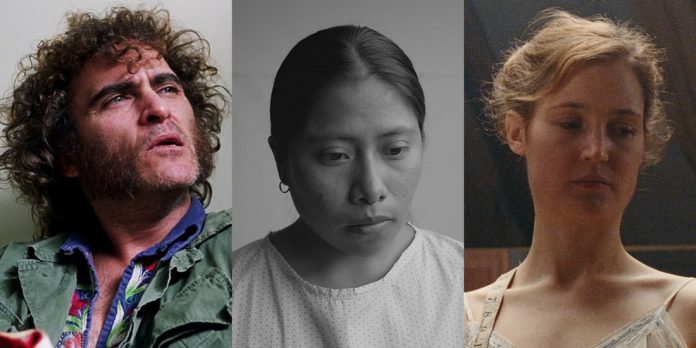 With the 2010s now behind us, it feels only natural to look back and discuss what films we felt had the largest effect on us. Some of us have already posted about this including our EIC Matt Neglia and Ryan C. Showers. We recently announced the nominations for the NBP Film Community Awards representing the best of the 2010s and now I’d like to share with you the films that connected with me emotionally, that I felt were crafted to perfection, and some I just found to be endlessly entertaining.

​Here are my 25 favorite films of the past decade!

Bong Joon-ho’s “Parasite” is without a doubt one of the sharpest films I have ever seen in my entire life. Each edge is sharpened to pure perfection and watching each frame be presented to the audience feels similar to what I would imagine watching a master painter’s brush strokes. All different kinds of brushes, all different kinds of style, being flawlessly mixed together to create a beautiful finished product.

“Parasite” flows so effortlessly like a ballet dancer, but also packs a powerful punch once the tone shifts – and, boy, does it shift. The tonal shift within this film is one for the ages; something so powerful that it can knock your socks off if you’re not ready for it. The acting, the editing, the production design, the score, every piece to this massive puzzle is downright genius.

9. The Wolf Of Wall Street

Martin Scorsese is absolutely a first-ballot hall of famer when it comes to filmmaking. He’s created some of the most memorable films ever and it feels like, for every decade that he’s been working, he has made a masterpiece. Well, his masterpiece of this past decade is certainly “The Wolf of Wall Street.” A cocaine-fueled, in your face, explosive extravaganza of a film that makes your heart race during its nearly three-hour runtime.

Anchored by an out of the park performance from Leonardo DiCaprio, “The Wolf of Wall Street” proves that Scorsese hasn’t lost his edge, and he certainly hasn’t lost any energy. This film marches to the beat of a double bass drum on an early Metallica album; it has so much speed, metaphorically and literally. With this film, Martin Scorsese proves he still has every bit of the edge he had at the start of his career and it comes through crystal clear on the celluloid.

Jordan Peele’s directorial debut certainly launches itself into the conversation for the greatest debut ever made. “Get Out” is a horror film that flawlessly tackles racial issues within America today. Bradley Whitford saying, “If I could’ve I would’ve voted for Obama for a third term,” certainly echoes in our brains even to this day, and it’s been three years since the film released. Making a socially relevant film that doubles as a genre piece, and that will clearly stand the test of time, is beyond impressive. And to capture that on your first film? Even more impressive.

Peele’s direction shines through in every scene. It’s clear that he has a knack for directing and has a talent for methodically unfolding his plots. Everything seems to be moving a little slow at first as if Peele is unwrapping a present corner by corner. But once he finally reveals what’s hidden inside, the surprise is genuine. He flawlessly dances his way through his scripts, only revealing pieces at a time to get his audience thinking and to have a genuine moment of “A-HA!” This, among many things, makes the film a spectacular one.

In what might be one of the more controversial picks on my list, “Inherent Vice” is an easy choice to put in my top ten. Paul Thomas Anderson is my favorite filmmaker and his stoner-fueled, crime drama piece is one that offers more questions than answers. Anderson does an excellent job of not giving away the entire pie, but instead, offer up very small slices here and there. The questions posed to the mystery of the film don’t always make a ton of sense, but they’re interesting to entertain.

Anderson has always said that he’s a writer first, then a director, and that may be most evident here than anywhere else. The script is what truly makes “Inherent Vice” a joy – next to the performances from all of the actors. The way Anderson manages to get his ensemble to flow and riff with one another, especially off such a dense script, is ridiculously impressive. “Inherent Vice” is one of those films that I don’t quite understand, but enjoy the hell out of.

Alfonso Cuarón’s magnum opus “Roma,” is a film that emotionally devastated me. It’s much more emotionally heavy than any of his other films. The black and white cinematography is absolutely gorgeous to look at; every frame feels like it’s straight out of an oil painting. The emotion of the film pours at every edge during every minute, and those emotions inject themselves directly into your brain.

“Roma” has a ton of tremendous qualities. One being Cuarón’s ability to make the environment of the film feel like a character of its own. Each scene feels like it’s breathing and has a life of its own, and part of that is due to the attention to detail in every single shot. To top everything off, the film features a once in a lifetime performance from Yalitza Aparicio, who is downright stunning in her acting debut. Her performance is the heart and soul of the film and I still think about it to this very day.

As I mentioned earlier, Paul Thomas Anderson is my favorite filmmaker and his latest project easily made its way into my five favorites of the decade. A sublime, razor-sharp, and downright lethal love story, “Phantom Thread” with Anderson at the helm is a dream come true. The way that the film drips with admiration and passion is something that only shines through in a hand full of romance films. Featuring Daniel Day-Lewis’s final performance, “Phantom Thread” is rock solid and endlessly re-watchable.

The dialogue between the characters seems to move so quickly at times that it’s nearly mind-blowing. Along with Day-Lewis, all of the performances are spectacular. Lesley Manville and Vicky Krieps are incredible to the point of even stealing scenes from Day-Lewis. “Phantom Thread” is a film that hits many different emotional chords that it was so easy to fall in love with.

“The Social Network” used to be much higher on my list and was even number one for a while. But after revisiting some other films, it fell down a few pegs, which isn’t to the fault of the film. “The Social Network” is David Fincher at the absolute top of his game. Everything that he obsesses over and strives for in every film is at full power in this. The slow and steady movement of the camera, the cunning style of the editing, everything that Fincher has made a career off of is in tip-top shape here.

“The Social Network” has a similar technical feel to another David Fincher classic, “Zodiac.” But the one aspect that I believe sets this film apart, is Aaron Sorkin. Sorkin’s script moves at the speed of a bullet train and it’s almost difficult to keep up with at times. But the dialogue between all of the characters is just absolute insanity. The perfect chemical fusion of Fincher’s obsessiveness to detail, and Sorkin’s laundry list of details, makes this film a match made in heaven.

George Miller’s return to his cult classic action franchise was a moment I’ll cherish for quite some time. The sprawling scale that was put on display; the visual clarity of all the action; and all of the breathtaking moments within the film. “Mad Max: Fury Road” might be one of the greatest action movies ever, but it certainly is the greatest one of the decade. “Mad Max: Fury Road” has little to no flaws and moves at a brisk and exciting pace.

It’s a film that feels way shorter than it is and you find yourself begging for the fun to never end. The costume design, the production design, the music, and the stunts performed were all practically executed. It’s a movie that took just a little bit more extra care to detail within the action genre and shocked quite a few people. Despite there not being a “Mad Max” film for three decades, and the one prior being a bit on the disappointing side, “Mad Max: Fury Road” made a roaring comeback and has all of us begging for another entry.

“Interstellar” is an expansive, science fiction drama entry from Christopher Nolan that has left me dumbfounded ever since I first saw it in the theater. The score from the docking sequence constantly plays in my head. Matthew McConaughey’s stunning performance brings me near to tears when I start thinking about it. Christopher Nolan achieved something in the science fiction genre that I’ve never seen or felt before. To craft such an emotionally dense story around something so out of reach to us is what puts this film in such a special place for me.

Technically, “Interstellar” might be Nolan’s greatest effort. The constantly changing aspect ratios, the mix of CGI and practical effects, the score as I previously mentioned, all of the things we love Nolan for crescendo into a beautiful symphony here. The film is such an expansive epic film that it moved up quite a few spaces after my latest rewatch. “Interstellar” is, well, stellar and deserves a lot more love.

I know, there are all three of the movies that Paul Thomas Anderson directed this decade on my list. But the number one spot goes to “The Master.” It might be my favorite film ever made in general, but it’s definitely, without question, the greatest movie of the past decade. Anderson gives a lot of love to his characters and he cherishes every moment possible with them, and that’s most clear in this film. Every character in “The Master” is intriguing in their existence and portrayed immaculately by their respected actors.

“The Master” hits me like a ton of bricks every time I watch it and I can’t watch it without crying. Specifically, the heart-wrenching ending where Philip Seymour Hoffman sings to Joaquin Phoenix. The way that Anderson gives you a glimpse into these characters’ lives and their interactions is just perfect. “The Master” is the kind of cinema that I adore the most and hits me on the deepest level.