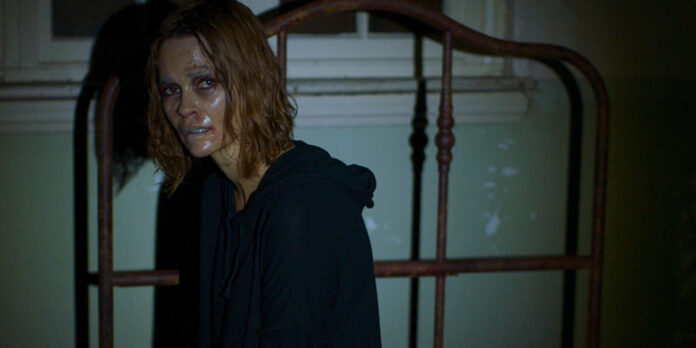 Twelve years ago, Neill Blomkamp’s feature-length directorial debut “District 9” was released to universal acclaim, including a nomination for Best Picture and a Best Adapted Screenplay nomination for the young director. Some trumpeted him as the next James Cameron. His career has since been a series of diminishing returns with glimmers of hope that he might return to the glory of his breakout film. His latest, a low-budget horror shot during the pandemic, is the nadir. While his underwhelming “Elysium” and “Chappie” were hamstrung by problems with the writing, they at least boasted competent filmmaking techniques. “Demonic,” on the other hand, is equally if not more so poorly written. It feels like the first feature made by a recently graduated film student in its craftsmanship. Maybe “District 10,” if it happens, will be the comeback we’re all hoping for from Blomkamp. It certainly isn’t this, which suggests he was the next Richard Kelly instead of the next Cameron.

“Demonic” follows a woman (Carly Pope) who learns that her estranged convict mother (Nathalie Boltt) has lapsed into a coma and is being utilized in a groundbreaking set of experiments to explore the human brain. Reluctantly, she agrees to descend into her mother’s consciousness to engage with her and learn the truth about their family’s past and its sinister secrets.

So, where to start with Blomkamp’s latest disappointment? The screenplay is derivative at best and absurd at worst. The dialogue is flat and expository, while the screenplay is a mishmash of “been-there-done-that” demon movies with a touch of “Lawnmower Man” and “The Matrix” thrown in for its first half, and then an utterly absurd plot development in the second, involving machine gun-toting SWAT teams comprised entirely of Catholic priests with huge tattoos of crucifixes on their spines. I’m not kidding.

Maybe some of the goofier plot elements and dialogue could have passed if Blomkamp had struck gold with his cast here. Carly Pope, as the lead, emerges with her dignity intact, but it’s not a Sharlto Copley type discovery that carries the weight of the whole film on her shoulders. Meanwhile, the supporting cast is stilted at best. Michael J. Rogers delivers every single line with his eyes averted downward and obvious delivery that screams, “Oh, this guy is bad news.” He plays his character as someone so suspicious that you keep thinking, “there is no way this guy could have survived in human society.” Meanwhile, Chris William Martin keeps delivering his dialogue with these ominous, dramatic pauses. It’s the kind of acting that reminds you of the scene in “This Is The End” where Jonah Hill is trying to say “there were fatalities” in a sufficiently weighty fashion now that he’s an Oscar-nominated actor. Still, everyone can see right through the phoniness of it all, and the same applies here.

Even Blomkamp’s typical technical proficiency is lacking. It’s not just the low budget hindering the film as the blocking and framing are pedestrian for a guy who has a couple of technically skillful films under his belt. The sound mix feels unfinished with obvious ADR moments and unintentionally jarring sonic transitions between scenes. Being that this is a horror film, the all-important jump scares, when they’re used at all, land flat, and the atmosphere doesn’t even compensate for that loss by being even the slightest bit creepy. However, it is worth mentioning that the virtual simulation environments are impressive given the film’s small production budget.

Making a movie without the budget Blomkamp has become accustomed to during a pandemic, no less, must not have been easy. However, I thought going back to filmmaking 101 basics could be Blomkamp’s return to form and his chance to deliver a new film that would rival his best work. Instead, it’s the worst work he’s done to date, not dissimilar from something you would have seen on the SyFy Channel in the mid-00s. He has talent- this is undeniable, but it is not evident here.