​Dads & Fads: The Evolution Of The Movie Dad 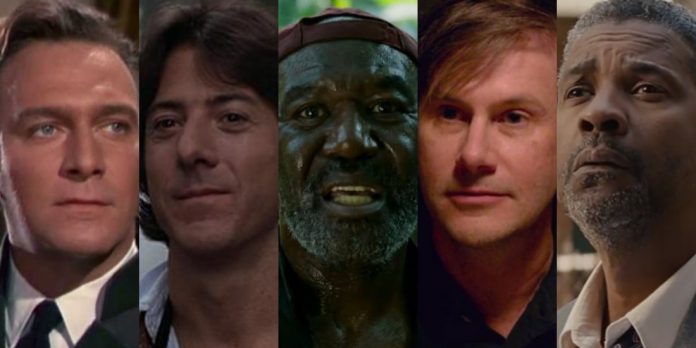 By Lauren LaMagna ​
​
Today is Father’s Day. A day that celebrates fathers of all kinds. For some, you might want to celebrate the day with dad’s favorite movie or watch a movie that makes you think of the fatherly figure in your life. But like many things in cinema, time has allowed great change to happen. When it comes to representation, up until recently, cinema was only depicting one type of father: the constantly working, strict, authoritative figure. And even though we had great portrayals of these fathers, it is apparent that there are other types of parental figures out in the world. But as time moves forward and different voices get to tell their stories, the father character has evolved into a beautiful spectrum to represent more than just one type of father.

Traditionally, in the Golden Age of cinema, which stemmed from the late 1910s through the late 1960s, America and other Western countries had unspoken guidelines on how one should parent. They weren’t written in laws or guidelines but they were shown in commercials and advertisements that encouraged the public to behave a certain way. During this time period, the ideal mother was the caretaker of her husband and children and the ideal father was the breadwinner. He should work a steady nine to five job and come home to relax with a hot dinner on the table. He also didn’t have much of an active role in raising his children or any reasonability around the home domestically. The father ran the house, but his number one priority was to work and earn as much money as possible.

Under this type of fatherhood, the children during this time respected their father but didn’t necessarily have a close bond with him. And since cinema reflects life back onto its audience, most of the movie dads during this time were portrayed in this way. Favorite movie dads like Captain Vonn Trapp in 1965’s “The Sound of Music” is a textbook example. Taking place in the late 1930s before the Second World War, Captain Vonn Trapp was a successful father in the sense that he was able to provide his children with all the luxuries that they wanted and needed, but he did so in a military manner. His children responded and marched to a whistle, wore uniforms in their home, and acted like soldiers under their commander. The Captain wasn’t affectionate or nurturing, but strict and direct. Granted, it can be said that this character didn’t know any better due to his upbringing and was based on a real person, but that also shows how common this type of father was at the time.

This type of father remained prevalent as the main representation of dads in cinema all the way up into the 1980s. Of course, there are exceptions like “Kramer vs Kramer” and “Ordinary People”, but one can argue that the characters’ arcs involved stepping away from their work and in doing so, finally getting to know their children and familial relations. It isn’t until the fathers in these films leave the stereotypical working dad persona that they begin to bond with their families and portray a different type of dad. But even if the fathers were more involved in their children’s lives, they still micromanaged them. In 1987’s “Dirty Dancing”, a film known for being ahead of its time and revolutionary, Baby’s father has trouble accepting Baby’s passions throughout the film. At the beginning of the story, it is obvious that Baby doesn’t want to be a part of the high society she was born into and marry a man from Harvard Law, a future her father had in mind for her. This mindset applauds her father and puts him into shock, but to the audience, those opinions make perfect sense for the character. It’s not like her experience that summer changed her life dramatically; in the beginning of the film, Baby craved a different life and wasn’t impressed with the life she was currently living. Her father was just too busy and blind to see it. It isn’t until he is physically away from his work environment and on vacation with his family that he finally sees his daughter.

​But since the turn of the 21st century, where more artists have the opportunity to tell different stories, more types of fathers have broken into the spotlight. In 2003, Pixar released “Finding Nemo”, a story about a father looking for his lost son. But unlike all the dads prior, Marlin is an overprotective single father. He must be with his son at all times and has trouble letting Nemo out into the world. During his quest to find his son, he learns that he needs to allow his son to venture off without assistance. Marlin’s the exact opposite of a movie dad from the 1960s and a good percentage of movie dads from the 1980s. Other films like “The Pursuit of Happyness” and “Fences” further depicted the other side of the working father from the point of view of low-income Black fathers in America. In these films, Chris and Troy aren’t the passive fathers like Captain Von Trapp or other characters from that era. They’re active in their son’s lives and show the hardships fathers may take in order to provide their children with a better life; a plotline that was missing from cinema for decades.

​Within the last ten years, audiences are finally seeing a diverse spread of dads that are now reshaping the father dynamic in cinema. There is no longer one type of dad on screen, as there is no one type of dad in the world. During the last five years even, we’ve seen directors and screenwriters put a spin on the distant dad like in “Eighth Grade” and “Call Me by Your Name”. They represent the quiet dads. They’re discreet and observational characters for the majority of the film but are always aware and in tune with their children’s lives, especially when they didn’t know it. Even though they may not be extroverted or stern like the previous stereotype, they’re attentive to their children’s lives and know exactly what to say in a time of crisis. We’ve also seen dynamic fatherly figure relationships in “Moonlight,” showing that one does not have to be blood-related to nurture and have a dramatic impact on a child. This year, Spike Lee’s “Da 5 Bloods” addresses how PTSD can affect and strain a father’s relationship with his child, an important and prominent topic that is not discussed as much as it needs to be.

Like all humans, fathers come in all shapes and sizes and express their love in different ways. So it is only natural that cinema should reflect that as well. Hopefully, in the next few years, we will see an even bigger spread of fatherly figures in cinema that pays tribute to the stern, quiet, strict, overprotective, free-range, and everything in between men that raised us. Because it’s what they deserve. Happy Father’s Day.

What are some of your favorite movie dads? Is there a particular film you like to watch with dad? Let us know in the comments section below or on our Twitter account. Also check out our latest polls here.