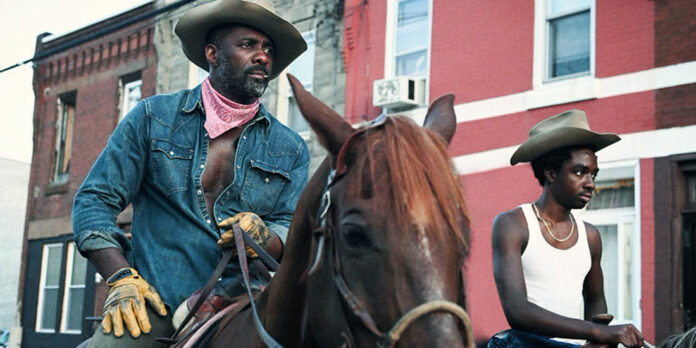 For those who have lost their way and are searching for a path in life, a new start, one place you’d least expect to find it is with modern-day cowboys. However, in Ricky Staub’s debut feature film “Concrete Cowboy,” we are introduced to the Fletcher Street Stables in Philadelphia. A subculture of Black urban horse riders who have been living on the land for over a hundred years. And despite the poverty, violence, and gentrification of the environment around them, they continue on, supporting one another. Presenting us with a community we are not used to seeing, or in some cases, didn’t even know existed, “Concrete Cowboy” wonderfully establishes its setting but also knows more importantly, that it’s the people that make up a culture, combining professional actors with genuine riders from the area to give us a fresh story.

Cole (Caleb McLaughlin) is 15-years-old and has been involved in one too many fights at school. Expelled and with his mother fed up with him, she sends him from Detroit to Philadelphia for the summer to live with his father Harp (Idris Elba), an inner-city cowboy who buys and rehabilitates horses for the community. Dropped off with no money, no phone, and no direction, Cole reconnects with his cousin Smush (Jharrel Jerome), who he hasn’t seen in many years. Afraid that his dealings with Smush will lead to danger for his son, Harp forbids Cole from seeing him, and eventually, Cole begins to work for his father at the stables. Performing unfun tasks such as shoveling horse feces, Cole eventually begins to develop a relationship with fellow rider Esha (Ivannah Mercedes) and a horse named Boo, providing him with a potential future. However, when Smush’s plans to escape North Philly through his drug dealings come to a head and the city makes their move to seize the community’s horses and stables (led by Clifford “Method Man” Smith’s local town Sherriff), Cole must decide where his allegiances lie.

A coming of age story, a father-son story, and a story about the people who make up this unique community, it’s fair to say “Concrete Cowboy” is trying to juggle too much in its two-hour-long narrative. There’s also a re-occurring theme of preserving the past, thus establishing a new tomorrow for those who need it. And for the most part, Staub’s screenplay (which he co-wrote with his business partner Dan Walser) hits on all of these notes gracefully, with a humanistic empathy for his characters, some of whom are played by the real-life Fletcher Street Riders. The level of authenticity and respect for the lifestyle that these people choose to lead is the film’s greatest quality and a fantastic introduction to the subculture.

Caleb McLaughlin truly impresses in his first lead role since making an impression on Netflix’s hit show “Stranger Things” as the “drowning” young boy who needs to resurface in order to become a man. Cole is told that “Horses aren’t the only things that need breaking around here” and while he is certainly a tough kid, as the film goes on, his vulnerable side slowly starts to come through, showcasing McLaughlin’s true abilities. One particular scene involving Cole taming a wild Boo (his first time riding a horse) is cathartic due to the number of dynamics taking place within the scene. His relationship towards Boo, towards his father, and even himself, are all culminating in this one scene and McLaughlin capably takes us through Cole’s character arc. Idris Elba exhibits strength as a leader that everyone turns to for support and guidance. He’s a fatherly figure to everyone, except his son. But just as Cole undergoes a character arc, so too does Elba’s Harp, as his own tough exterior is chipped away and we begin to fully understand his parenting methods for Cole.

“They’re always trying to delete us from the history books,” says the wheelchair-bound Paris (Jamil Pattis), however with “Concrete Cowboy,” these people and their way of life will not be forgotten. Seeing them ride down suburban streets on horses is a sight to behold – almost mythic-like as it recalls classic imagery of the Wild West. A time long since gone but has evolved into what we see here. The sense of community that is depicted by Staub is touching as we get to know these characters and the environment they reside in, providing us with a deep emotional connection. Although the film attempts to bite off more than it can chew (the third act is stuffed with set pieces and dramatic moments that feel rushed), it firmly establishes that culture isn’t a place, it’s the people. It’s the family you are born with and the one you choose for yourself. And as long as everyone sticks together, no matter where they are, they will continue to ride on.