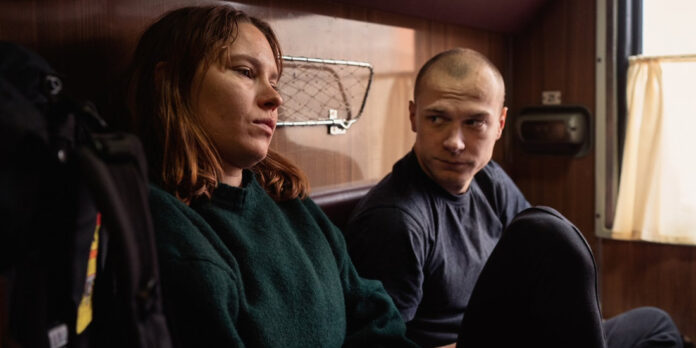 THE STORY – Traveling by train from Moscow to Murmansk, a Finnish student forms an unlikely friendship with a gruff Russian miner.

​​Maybe it is just my nostalgic side, but I’ve always been a sucker for movies set on a train. Whether it’s Hitchcockian suspense or Sturges wackiness or Wilder/Pryor mischief, please give me a Pullman car with sliding doors, and you’ve hooked me. When I think back on them, what I remember is fun, adventure and romance.

“Compartment No. 6” is none of these things.

This is not to say that it isn’t good. In fact, this Finnish selection for this year’s Oscars is very, very good; it is, however, its own animal, breaking all the roles by which train movies abide and offering instead a surprising number of emotional rewards that you might not expect from a train movie. For one thing, it ignores a genre overlay entirely. It’s not a romance, and it’s not a whodunnit but is instead simply a film about two people from very different realities reluctantly getting to know one another. And the result is surprisingly captivating.

Laura (Seidi Haarla) is a Finnish archeology student studying in Moscow with her professor Irina (Dinara Drukarova), with whom she is also having a passionate affair. As Irena loses interest in her after graduation, Laura decides to take a long-planned four-day train trip from Moscow to Murmansk to see the rare petroglyphs (rock paintings) that she has always wanted to visit.

Entering Compartment No. 6 onboard, Laura encounters her cabin mate Ljoha (Yuriy Borisov), a Russian miner who’s drunk on vodka as he flicks off sparks from his cigarette into the air. Understandably, Laura cannot get out of there fast enough, but her search for other accommodation is futile since the train is at full capacity. If “Compartment No. 6” was a romantic comedy, this would be the moment when the couple would continue to bicker until they find a common enemy against whom they can unite, then fall hopelessly in love.

Laura and Ljoha have no interest in falling in love — instead, they can only hope that they can get through their journey with their sanity intact. As director Juho Kuosmanen unfolds his story, we soon realize that Laura and Ljoha are both terribly damaged people. As both are trying to rebuild their own lives, each has constructed a wall about them to protect their vulnerable feelings. The dramatic arc of “Compartment No. 6” soon becomes how they begin to dismantle their individual walls, removing one brick at a time.

There is an emotional delicacy to the screenplay by Kuosmanen, Andris Feldmanis, and Livia Ulman (from the novel by Rosa Liksom) in just how the characters’ inner feelings are revealed to us gradually, allowing us to discover their layers in due course. In a year bursting with great screenplays from international features, whether adapted (“Drive My Car“) or original (“A Hero,” “The Worst Person in the World“), their script to “Compartment No. 6” can comfortably rank among the very best.

Kuosmanen’s direction here is solid, skillfully balancing the intense scenes set in the confined quarters of the train with outdoor sequences that allow the characters (and the audience) some welcome room to breathe. That balance also helps Haarla and Borisov to flex their considerable acting chops — Haarla is impressive from the get-go. At the same time, Borisov’s skinhead miner sneaks up on you, as he has an enormous character arc, and he pulls that heavy lift-off impressively.

It’s a sometimes risky move to subvert a beloved genre, and placing a man and a woman in a train compartment is likely to raise certain expectations in the minds of any audience. But the manner in which “Compartment No. 6” unfolds its complex character study is distinctive, managing at the same time to be intriguing, surprising, and ultimately quite compelling.