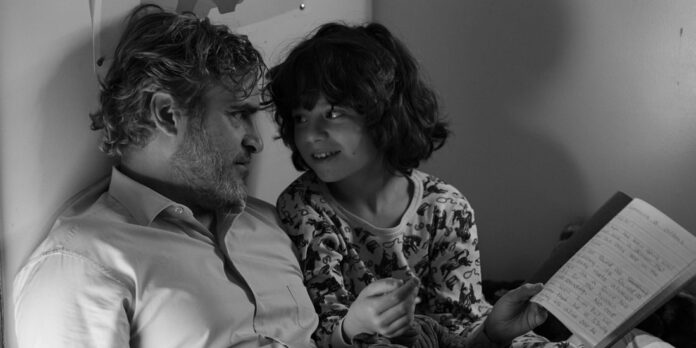 THE STORY – A man and his young nephew forge a tenuous but transformational relationship when they are unexpectedly thrown together.
​
THE CAST – Joaquin Phoenix, Gaby Hoffmann, Woody Norman, Scoot McNairy, Molly Webster & Jaboukie Young-White
​
THE TEAM – Mike Mills (Director/Writer)​
​
THE RUNNING TIME – 108 Minutes

After exploring his relationships with his father (“Beginners”) and his mother (“20th Century Women“), Mike Mills is now a father and is exploring his relationship with his son through his latest film, “C’mon C’mon.” Mills has always had an innate ability to tell sweet and tender stories about human connection, and his newest feature is no different. Splendidly captured in understated black and white by cinematographer Robbie Ryan, with an enchantingly serene score by the Dressner Brothers (aka. The National) and two phenomenally insightful performances at the center of its warm heart, “C’mon C’mon” further establishes Mike Mills as a gifted, empathetic storyteller for our generation.

Joaquin Phoenix as Johnny (Joaquin Phoenix) is a radio journalist who travels the country to different cities interviewing children about their views of the current state of the world and their thoughts on what the future might hold. One year after the death of their mother, Johnny’s sister Viv (an underrated Gaby Hoffmann) asks for Johnny’s help with watching her nine-year-old son Jesse (Woody Norman) while she attends to Jesse’s father (An underutilized Scoot McNairy), who is suffering a paranoid, psychotic breakdown due to his bipolar disorder. The unmarried Johnny hesitantly agrees as he takes his nephew with him across the country, slowly learning from him, coming to grips with his own anxieties, and growing not just as a parental figure but as a human being.

Shedding the demented work of the Joker from his aura, Joaquin Phoenix pivots dramatically with his follow-up to his Oscar-winning role with his most emotionally affecting work since Spike Jonze’s “Her.” There are no gimmicks, no overblown scenes of hysterics. Phoenix is effortless in how freely he exudes warmth, curiosity, charm, and concern, not just for his nephew but for all the children he interviews as he (and by extension, Mike Mills) have to come to grips with the life we are leaving behind for the next generation. Luckily, Mills does not cast a cloud of melancholia over such a circumstance, but through the extraordinary performance of Woody Norman as Jesse, he’s able to communicate how intelligent and strong the next generation is, giving us and Johnny hope for the future of our planet. While Phoenix is putting forward his most nuanced and delicate performance in some time, he’s equally matched by Norman, who is a revelation as Johnny’s nephew. Pure, honest and funny, the chemistry he has with Phoenix lifts the entire movie to a level of charm that is irresistible despite some minor flaws preventing the film from reaching the heights of some of Mills’ other works. Neither performance from Phoenix or Norman feels like a performance. This is to be expected for Phoenix, but for a nine-year-old (who happens to be British and is flawlessly executing an American accent), the result is astounding. As far as child performances go, this is truly special, and much of the credit has to go towards Mills and how his screenplay and direction allow Phoenix and Norman to explore the depths of their meaningful bond as uncle and nephew.

We, as adults, tend to overcomplicate life. We’re given tough questions, dilemmas, and mysteries to solve and are, more often than not, unable to provide clear and concise answers and solutions. Children do not have this problem. By having Johnny conduct various interviews with children all over the country to hear their perspectives on the future (whether they’re scripted or not), the heartfelt message of children teaching adults about the environment around them through their innocence and optimism is a powerful one that stresses the importance of parenting, now, more than ever. The responsibility is daunting, and truth be told, like Johnny, we don’t have it all figured out. “C’mon C’mon” puts forth challenging topics about the role of parental figures in the lives of children, but Mills gracefully guides us with the same wide-eyed degree of wonder a child would bring to it. There are some missteps along the way as the film starts to get repetitive towards the end. The child interviews stop adding anything new to the film’s central theme after a certain point, and there is a scene where Johnny loses Jesse on the streets of New York, not once but twice, with little to no difference in what was learned from the first time to the second. It may not be perfect, but such imperfection is beautifully rendered in Mills’ characters and their views of this flawed world that it’s difficult to hold the rest of this gentle, kindhearted, and earnest film accountable.