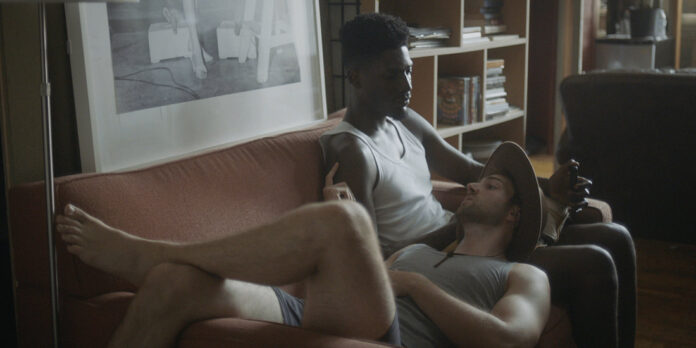 THE STORY – A New York love story that toes the line between narrative and doc with two actors reliving parts of their own experiences.
​
THE CAST – Matt Fifer, Sheldon D. Brown & Sandra Bauleo

There aren’t as many cities that are as infused in their love stories as New York City. “Cicada” is another one of those love stories set in the big apple, co-written by the leading duo, using their own experiences in the narrative. Written by Matthew Fifer and Sheldon D. Brown, they play the roles of Ben (Fifer) and Sam (Brown), two men who have their own issues they need to resolve.

Ben is bisexual and spends the first opening minutes of the movie in a sleazy montage of one night stands and pointless hookups – with employees, friends, strangers, etc. The scenes themselves are raw and empty, there is no intimacy here between Ben and any of these people, just an unloading of emotion. It’s quite clear in Ben’s personality that this is his coping mechanism. He’s quiet around everyone else around him unless the possibility of a hookup is there. When first speaking to his colleague Theresa (Jason Greene), he is replying in singular words and looking away. It isn’t until Theresa’s obvious attempt at hitting on Ben that he takes notice.

On the other hand, you have Sam, a man who isn’t as fuelled on sex as Ben is but has his own issues with intimacy, especially in public. Sam is trying not to disclose this information about him due to his close relationship with his father as well as his work professionals. Sam states the differences between him and Ben is that he’s the only black person at his job, so him being gay is another thing that could hold him to further discrimination. It’s a captivating performance by Brown that encapsulates the struggle that he must have went through. Neither Ben nor Sam were expecting this to blossom into a relationship, but it does and over time we see both of them reveal things to one another and to themselves.

“Cicada” is also an exploration of childhood trauma and finds these characters right on the boiling point of dealing with this unspoken grief. Their exchanges feel like two people getting to know each other for the long term – both speaking about when they knew they liked men. For Ben, it was seeing male strippers when he was around nine or ten whilst Sam was intimate and close to another boy when he was a child. Both actors do a terrific job in conveying this relationship, with a beautifully open scene when they visit a funfair together, holding hands and embracing one another.

Fifer, also credited as co-director (with Kieran Mulcare), does an excellent job at diving deep into these characters and crafting his own performance. Ben and Sam’s story isn’t just a love story but they’re a clear example of the differences that people in adversity can face due to their upbringing, opportunities and social class. Society has placed a big distinction between being gay and bisexual and “Cicada” is ready to bring awareness to that.

Within the blossoming relationship are deep inner revelations that both characters are dealing with for their own recovery. They are both able to help one another get to the bottom of their childhood and better shape their own relationships with their family and friends. It isn’t a love story for the ages, instead, these two were able to help one another and benefit each other’s lives. Containing most of its scenes in the grey streets of the Empire state with a supporting cast that includes Cobie Smulders, David Burtka (both from “How I Met Your Mother”) and Bowen Yang (“Saturday Night Live” alumni) – “Cicada” is clearly destined to be another great and underrated gem from the creative talents working in New York.