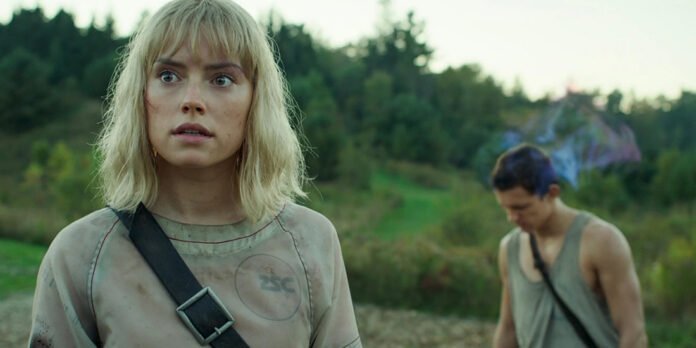 THE STORY – In Prentisstown, Todd has been brought up to believe that the Spackle released a germ that killed all the women and unleashed Noise on the remaining men. After discovering a patch of silence out in the swamp, his surrogate parents immediately tell him that he has to run, leaving him with only a map of New World, a message, and many unanswered questions. He soon discovers the source of the silence: a girl, named Viola.
​
THE CAST – Daisy Ridley, Tom Holland, Mads Mikkelsen, Demián Bichir, Cynthia Erivo, Nick Jonas & David Oyelowo​
​
THE TEAM – Doug Liman (Director), Patrick Ness & Christopher Ford (Writers)
​
THE RUNNING TIME – 109 Minutes

After a very long-delayed production which saw the screenplay pass through Charlie Kaufman, Jamie Linden, Lindsey Beer, Gary Spinelli, John Lee Hancock, Christopher Ford and author Patrick Ness (from whom the story is based on), “Chaos Walking,” much like the internal voices of its male characters, has finally been seen and heard. There is no putting the genie back into the bottle. It’s finally out there. Since principal photography was wrapped in 2017, the film’s stars, Tom Holland and Daisy Ridley have become global superstars for their franchise roles as Spider-Man and Rey from the Star Wars series, respectively. Their combined star quality, along with the film’s buzzed-about production, has brought about an anticipation for this film that it’s unfortunately unable to meet, as director Doug Liman’s finished film is nothing but a walking, talking, piece of chaos.

Todd Hewitt (Tom Holland) lives on a forest planet in a town called Prentisstown in the not too distant future where all the women are dead and men’s thoughts are heard and seen by others, now referred to as “the Noise.” One day, he casually stumbles upon a mysterious girl, the first one he’s ever seen, named Viola. She has crashed landed on his planet and needs help to get back home. However, the ruthless mayor of Prentisstown, David Prentiss (Mads Mikkelsen), has an agenda of his own and is after Viola, causing her and Todd to flee for safety. But how can Todd keep her hidden and safe when interrogated about her whereabouts? We know how one can keep their thoughts to themselves by not speaking them out loud but how does one turn off that inner voice completely when it can threaten the ones you care about?

“The Noise is a man unfiltered, and without a filter, a man is just chaos walking” is the quote from an unknown world settler, where the film gets its title from. Introducing a strong science fiction premise with some intriguing world-building, Ness’s story was planned to be adapted into three movies. Now, it is unknown if we will ever see the second and third installments of this story. Mainly because, what we get here from Liman, the numerous writers who worked on the screenplay and Holland and Ridley is a middling action-blockbuster that wants to be the new “Hunger Games” but can’t ever reach that full potential due to the film’s standard approach to its storytelling. There are many standard and tired tropes throughout “Chaos Walking,” including a villain dressed up in a cowboy hat and a big fur coat with scars on his face. Or a female protagonist we know absolutely nothing about until we get halfway through the movie and lacks agency of her own. A male protagonist who has fallen into circumstances beyond his control but instead of trying to deal with said circumstances, all he can think about is how attractive the girl he’s supposed to be helping is and how he wants to kiss her. Maybe the only unconventional aspect to this story is that Todd is adopted by two other men, played by Kurt Sutter and Demián Bichir but even their relationships are never fully explored enough to bring some sort of an emotional connection to the story.

There is an interesting and dynamic commentary about the relationships between men and women, where women can hear and see visualizations of men’s thoughts (their insecurities, doubts, fears and desires) and what that would ultimately lead to. However, the screenplay barely scratches the surface of this. It’s evident that this theme, character development and other aspects of the world-building were meant to be explored more in future films, but “Chaos Walking” cannot walk on its own. Not even the two leads can keep this project afloat, as their characters have practically zero chemistry together and we are never able to buy into their romance. Moments of intended levity created by Todd’s inner thoughts in front of Viola are meant to be endearing and playfully comedic but they instead come off as cringeworthy and pathetic. By the time we get to the end of the film and Viola has started to fall for Todd, we still don’t really seem to understand why other than she’s thinly written, he’s taken off his clothes in front of her and…they’re both good looking so, why not? Holland’s acting is hindered by the fact that most of his dialogue is not actually spoken by him but visualized and heard through “the Noise,” a visual effect that simulates the character’s inner thoughts for others to see and hear. If the volume had been turned down and all we were doing was watching Holland’s facial reactions to try and get any kind of a window into the soul of this character, we wouldn’t find it. While it’s unclear if his hallow and unexpressive work is his fault, the screenplay’s fault, or Liman’s fault, the fact of the matter is, it’s never a good sign when the character you care about the most is the dog that is accompanying your two big blockbuster protagonists.

“Chaos Walking” had a ton of potential. Had the film not experienced its troubled production history, which continued to delay its release, it’s possible we could’ve seen big box office returns for this movie if it were released pre-COVID. However, the final product would still be the same in terms of overall quality: undercooked and conventional. Considering the production design is already limited by being set on a forest planet, there’s a lack of imaginative costumes and dazzling visual effects; this is a science fiction film relying on the star-power of its two leads and less on its crafts to deliver a new franchise. It stumbled, it fell and it’s probably not getting back up.