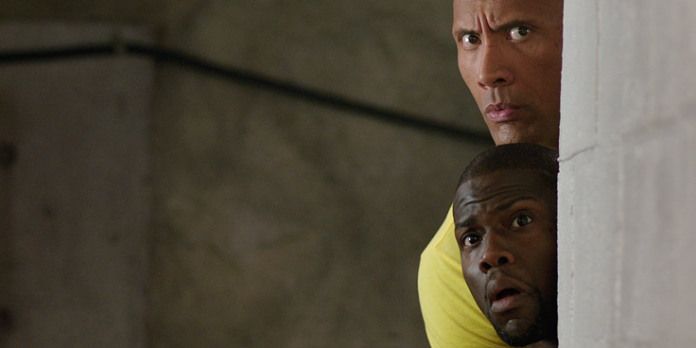 THE STORY – Bullied as a teen for being overweight, Bob Stone (Dwayne Johnson) shows up to his high school reunion looking fit and muscular. While there, he finds Calvin Joyner (Kevin Hart), a fast-talking accountant who misses his glory days as a popular athlete. Stone is now a lethal CIA agent who needs Calvin’s number skills to help him save the compromised U.S. spy satellite system. Together, the former classmates encounter shootouts, espionage and double-crosses while trying to prevent worldwide chaos.

​If you have seen the trailer for “Central Intelligence” (Which you can see on this page), then you probably have a good idea of what kind of a film you are in store for. If you perceive the trailer to be silly and inconceivably ridiculous, it will be exactly that. If you think the chemistry by Dwayne “The Rock” Johnson and Kevin Hart will be worth the price of admission, you are probably right. It’s a big loud, dumb, action movie with some very funny moments and many not so funny moments that will please its targeted audience and not much else. It’s not pretending to be something it’s not and the marketing team has done a good job at not deceiving us as to what kind of film “Central Intelligence” is. So what is it to me? A film, lacking in intelligence.

In 1996, during High School Robbie Weirdicht was an overweight bullied teen who was only shown compassion from one individual, Calvin Joyner (Kevin Hart). Fast forward 20 years later and Calvin is a successful accountant with a beautiful wife (Danielle Nicolet) but feels his life is lacking in the excitement all his High School days promised. One day, a changed Robbie Weirdicht (Now a physically fit Bob Stone, played by Dwayne Johnson) friend requests Calvin and attempts to reignite the friendship between the two. However, Bob Stone has a secret. He is now a lethal CIA agent who actually needs Calvin’s accounting skills to help to solve a case which threatens National Security. Hunted down by government agents (Led by a tougher than nails Amy Ryan), the two former classmates must work together to save the free world.

Dwayne “The Rock” Johnson and Kevin Hart attempt a role reversal in this film where Kevin Hart is playing the straight man caught up in imaginary circumstances that are way beyond his head. And Dwayne Johnson is playing the over the top, goofy type that is certainly playing against type personality wise. Physicality wise, the guy is still just as action packed as ever in his fight scenes. However, the fight and shoot-out scenes are not where this film succeeds. It’s in the indelible chemistry between the film’s two leads. Fans of both the charismatic actors will be entertained by their banter and camaraderie which can surely be felt beyond the screen. Special shout out to Amy Ryan whose stoic facial expressions garner more than a few laughs themselves and there are a couple of high-profile celebrity cameos which will have the audience howling with laughter. Aaron Paul is wasted, however, other than an homage to his infamous “Breaking Bad” catchphrase which had my audience standing up and cheering.

The screenplay’s simple message of how bullying is a terrible matter and that we all need friends to get through life is shallow and nothing original. So too are the action scenes, which are unforgettable and employ the up-close, shaky handheld camera movements that distract more than they engage. But let’s be honest here…are people going to see this movie for the action scenes and the film’s story? The real appeal is seeing Kevin Hart freak out, as we know he can, in reaction to the Rock dismantling countless government agents in a nonsensical manner. The fewer questions about the narrative’s plausibility, the better.

So while “Central Intelligence” does exactly what it sets out to do, that outcome will range for different types of people. If you’re looking for a smart spy-action film with an engaging story and a belly full of laughs, you might just be disappointed. If you’re looking for a good excuse to shut your brain off at the movie theater and enjoy two of the biggest stars in the world share the screen together in a juvenile manner, then you’ve chosen the right movie. “Central Intelligence” may lack intelligence, and the marketing says it has a lot of “Hart” and a big “Johnson” (Playing off of the two main star’s names), but this reviewer says it’s lacking in all of those areas resulting in a forgettable experience.