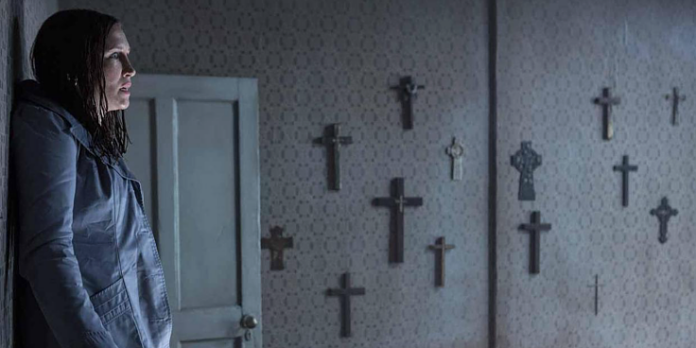 THE STORY – In 1977, paranormal investigators Ed (Patrick Wilson) and Lorraine Warren come out of a self-imposed sabbatical to travel to Enfield, a borough in north London. There, they meet Peggy Hodgson, an overwhelmed single mother of four who tells the couple that something evil is in her home. Ed and Lorraine believe her story when the youngest daughter starts to show signs of demonic possession. As the Warrens try to help the besieged girl, they become the next targets of the malicious spirit.
​
THE CAST – Patrick Wilson, Vera Farmiga  Frances O’Connor, Madison Wolfe, Simon McBurney & Franka Potente

Three years ago, James Wan gave us “The Conjuring” which shocked audiences all over the world to the tune of over $318 million worldwide. As a filmmaker, James Wan showed a confidence and artistry behind the camera which seeped into every frame, crafting a demonic possession film so terrifying and effective that many hailed it as the best horror film since the original “Exorcist.” Now, James Wan is back with the much-anticipated sequel, “The Conjuring 2.” And although it doesn’t reach the same heights as its predecessor did, this horror sequel comes pretty close by giving us more of the same.
​
​Set 6 years after the events of the first film, “The Conjuring 2” is set in 1977. Paranormal investigators Ed (Patrick Wilson) and Lorraine Warren (Vera Farmiga) are pulled out of leave to travel to Enfield, in London, where something disturbing is going on with the Hodgson family. The mother of the family, Peggy Hodgson (Frances O’Connor), confides within the couple that demonic spirits are within their home and may have taken hold of her daughter Janet (Madison Wolfe). The Warrens agree to take the case, putting themselves at risk in a situation which Lorrain later describes as “The one that still haunts me.”

James Wan’s hold on the horror genre is safely secured as he proves once again that nobody else working within the genre comes even close to matching his skill as a director within this field. It’s evident in the film’s lighting, it’s storyboarding and fluidity with which the camera creeps across the darkly lit sets. Steadicam shots glide through the Hodgson’s home with panache, as we are left wondering why other contemporary horror directors can’t showcase this much style within their films and settle for cheap scares instead. Which leads me to the terror of this film. James Wan once again knows exactly how to manipulate every tool at his disposal for maximum effect in getting his audience to feel dread and shock. The patient editing and length which a shot is held before either the tease or shock of a scare comes forth is absolutely flawless. It only helps that those moments are also accentuated by meticulous and pitch perfect sound work allowing for audience members to squirm just long enough in their seats before they are practically jumping out of them.

Does all of this sound familiar? Well, if it does it’s because “The Conjuring 2” is mostly successful because it features a lot of what the first film did right from an aesthetic standpoint. The story, however, suffers from its same repetitive feeling. Much like in the first film, Ed Warren is the one who must confront the evil spirit without the aid of the Catholic Church, which retroactively made all of the moments within the film where the Warren’s are trying to elicit the Catholic Church’s help irrelevant (Just like in the first film). Vera Farmiga and Patrick Wilson give their characters more depth this time around. Their fate is directly tied to the fate of Janet Hodgson and it certainly helps their characters to develop and grow from the first film. Both Farmiga and Wilson deliver solid performances yet again but it is Madison Wolfe’s performance as the 11-year-old demonically possessed Janet which will have heads spinning over how good Wolfe is at such a young age.

Narratively speaking, for a majority of the film’s long running time, it matches the quality of the first film. Yes, at two hours and thirteen minutes, “The Conjuring 2” is more than likely testing audience’s stamina for how much dreadful horror they can withstand at the movie theater. But, it’s the character development and patiently set stakes that make the film feel important. At first, seeing Patrick Wilson sing “Cant Help Falling In Love” by Elvis Presley may seem oddly out of place within a film such as this. But it stands as a perfect example as to how James Wan is able to bring the Warrens and the Hodgsons together and get us to care about their fates. However, their fates almost lose all goodwill in the film’s climax as an out of left field twist feels rushed and cheapens the emotional power of the film’s ending.