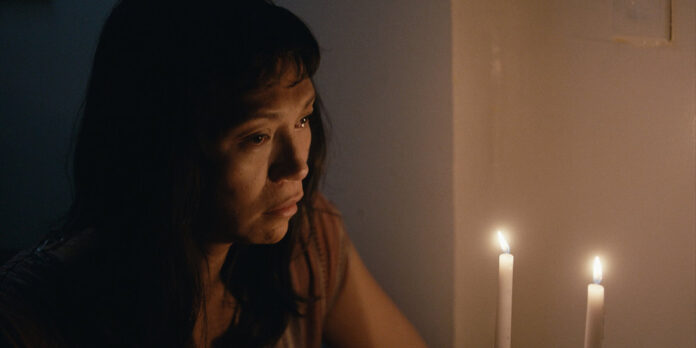 THE STORY – Olivia (Isabel Sandoval), an undocumented Filipino transwoman, works as a caregiver to Olga (Lynn Cohen), an elderly Russian woman, in Brighton Beach, Brooklyn. When Olivia runs out of options to attain legal status in the US, she becomes romantically involved with Alex (Eamon Farren), Olga’s adult grandson, in the pursuit of a marriage-based green card.

8/26/2020
​By Nicole Ackman
​
​​A “lingua franca” is a language used between two people with different languages, a common tongue that they can both understand. It’s a fitting title for Isabel Sandoval’s latest film which features a relationship between two people going through very different struggles. Sandoval wrote, directed, and stars in “Lingua Franca” and brings her own experiences as a Filipino trans woman to her main character, Olivia. While the film isn’t autobiographical, it’s characterized by a sense of authenticity that elevates this slow, slice-of-life film.

Olivia is a trans woman and an undocumented immigrant working as a caregiver to an older Russian woman named Olga (Lynn Cohen) in Brighton Beach, Brooklyn. She’s almost done paying a man to marry her for a green card when the plan suddenly falls through. Meanwhile, Olga’s grandson Alex (Eamon Farren) has arrived back in town and moves in with his grandmother while working at his uncle’s slaughterhouse and trying to avoid falling back into alcoholism. (TW// animal abuse for somewhat graphic scenes in the slaughterhouse.)

Olga is confused about her surroundings and struggles in her everyday routine, but Olivia is patient, reassuring, and calm. Olga and Alex clash at first as he underestimates her spirit. She tells him, “I may be old, but I’m smart as a whip.” Cohen does a fantastic job of crafting a fully fleshed-out character without many lines. Olivia and Alex begin to grow closer as they spend time together without Olga and it seems like he could be the answer to her green card issues. But much of the film is focused on Olivia’s everyday life and anxieties about deportation.

Sandoval gives us hints early on that Olivia wants more than a marriage of convenience to get her green card thanks to the copy of “Lady Chatterley’s Lover” on her dresser. When Alex reads aloud a letter his grandfather wrote to Olga, Sandoval uses intimate shots of his face to demonstrate that Olivia is seeing him in a different light. While their romance feels rushed and his character significantly less compelling than hers, the scenes in which Olivia teaches Alex about Filipino culture are touching. However, the secrets they are keeping from each other threaten to bring the relationship to the ground.

The film is remarkable in how it focuses on people that we rarely see onscreen. The juxtaposition between Olga, a Russian immigrant of an older generation, and the modern Filipino immigrant Olivia is clever. We see how her worries about deportation affect her daily life and how she sends money back to her mother, who is always anxious to receive her next check. Olivia spends time and money trying to secure a sham of a marriage to be able to stay in the country since the more strictly legal ways to obtain a green card are not available to her. The film is also unique in having a trans woman as its protagonist, but not having the plot revolve around her transition. While the film addresses some issues she deals with – another character using a slur or her not being able to get her passport updated to reflect her gender and name – it’s clear that her character isn’t limited to gender identity.

The film also offers a unique depiction of New York City that we rarely see on film. There are no shots of the Empire State Building or the Upper East Side, but rather a muted aesthetic showing Brighton Beach. Not only is audio of Trump talking about immigration and reports on ICE raids on radio and television used throughout the film, but we also see ICE on the street. It’s a visceral reminder that the fear of being deported is a reality that many people in our country deal with every day.

And yet, for all of the serious topics that it addresses, the film isn’t as dark or depressing as you would expect. It’s colored by Olivia’s worries but it also has its bright spots. The best relationship in it is between Olivia and her childhood friend Trixie (Ivory Aquino), a Filipino trans woman like herself. While the two are in similar situations, Trixie has fallen in love with a handsome man who will get her the much-coveted green card and she hopes for Olivia to find the same.

The film does feel slow even for its 95-minute runtime, and some of the abrupt jumping between characters in the first half is jarring. The ending will leave many viewers unsatisfied as it provides little closure and few answers. But “Lingua Franca” is bolstered by a beautiful, moving performance from Sandoval. If her costar, Farren, doesn’t always live up to her, it’s forgivable since the film is so entirely her vision. Suffice to say this will be the first film about a Filipino trans woman made by a Filipino trans woman that most of its audience will see, so it’s worth celebrating.